Last May I put forward an early warning indicator for late summer sea ice crashes. What is the state of that indicator like this year?

Read more »
Posted by Chris Reynolds at 07:21 No comments:

Now that the PIOMAS main series of total volume is out I can look at what that shows about the May volume loss. This being the first part of the overall spring volume loss.

The data is now in, so here's a look at May and prospects for the coming summer.

In the Sea Ice Prediction Network releases this year is a report from Haas et al (PDF). In which they note that elements of the evidence suggest that "that the MYI in the region has the same or slightly smaller chances of survival in the coming summer than it had in 2015." However they do point out that it is more fragmented than in 2015.

This raises a question I have pondered, brought about by the detailed behaviour of melt in Beaufort. I expect near open water condition by September, but I wonder if there will be a stall in extent losses in Beaufort on the way to that state.

Where is the low extent coming from?

Using Cryosphere Today regions, where is the low extent at present coming from?

GISS global temperature anomaly data is out for April. The last 7 months have been above 1degC global anomaly.

Temperatures over the ice: Normal for the new normal

Temperature has been obtained from NCEP/NCAR as timeseries and composites. There is evidence supporting suggestions of melt ponding along the Alaskan coast, but much of the pack is cool/normal for recent years. Click on images to enlarge.

Thanks, as always, to Dr Zhang and the PIOMAS team at the Polar Science Center for making gridded PIOMAS products available to amateurs such as myself. It's early May and April PIOMAS data is out. April is the peak of volume and ice state in April is one of the primary initial conditions that sets the scene for the coming melt season.

The 2016 sea ice melt season in the Arctic has started, Beaufort starts early this year, but does this mean it is starting as it means to continue?

In 2014 I posted about an apparent oscillation of August extent loss, I updated this with preliminary data in August 2015, but failed to return to the issue to see how things actually turned out. As this issue has a bearing on the post that follows, and prompted by reading a comment at Neven's blog about claimed cycles in sea ice, I am posting this to update data on last year's August extent loss.

Read more »
Posted by Chris Reynolds at 09:27 No comments:

Beaufort has already started to collapse, I will have more about that in a post to follow when I have the time tomorrow. For now, I have amended images from Meereisportal for a close look at Cryosat 2 ice thickness in Beaufort.

More commentary about the recent Cryosat 2 data is available from Neven at the Arctic Sea Ice Blog.

So far this month NSIDC have suspended all processing of the Sea Ice Index (G02135). This is explained on the NSIDC Sea Ice Index page as follows.


Notice (04/05/2016): Due to issues with the DMSP-F17 SSMIS data used to create the Sea Ice Index, we are suspending processing and investigating the problem with our data providers. Learn More. For questions, contact NSIDC User Services. 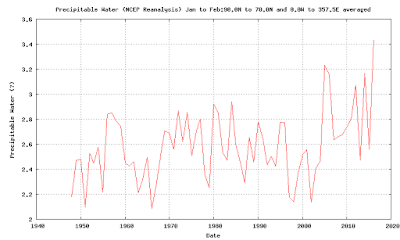 NCEP/NCAR temperature data is now out for February 2015, it shows January's staggering warmth in the Arctic continuing. 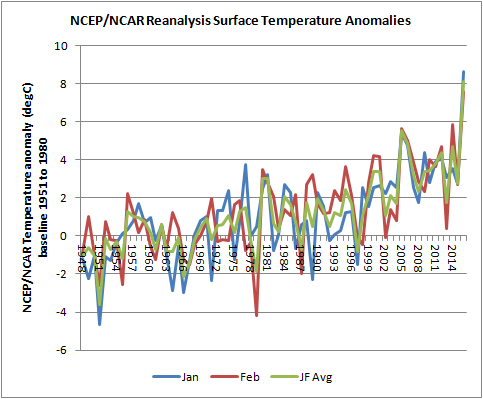 As promised in the comments of my previous post, I am going to break down the difference between January 2015 and January 2016 in terms of region and thickness.

Why is extent so low?

This post looks at why Northern Hemisphere (NH) sea ice extent is so low at present. A commenter Dreesen asked what I thought about it, and due to work pressures I hadn't looked at sea ice for weeks. The low sea ice is likely due to a combination of long term reduction due to global warming and weather in the North Atlantic. But temperatures in January were extreme, and I lack a convincing answer as to why.

(This post was largely written on Sunday but I've been too busy to do a final check and post until now.)

As you already know 2015 was the warmest year on record in the instrumental record, at an anomaly of 0.87degC this is a substantial new record. Anyway, for what it's worth, here are a few comments and graphs (late because I've been too busy at work).

How goes the Arctic Night?

Well, there's been more UK flooding, this time in Scotland, however I'm not going to get into the habit of covering every flood event, I've said all I can say at present in my my previous post. For this post I want to take a quick look at how the cold of the winter's 'Arctic night' is proceeding.

Read more »
Posted by Chris Reynolds at 09:27 No comments: