How goes the Arctic Night?

Well, there's been more UK flooding, this time in Scotland, however I'm not going to get into the habit of covering every flood event, I've said all I can say at present in my my previous post. For this post I want to take a quick look at how the cold of the winter's 'Arctic night' is proceeding.

The GISS LOTI global temperature data is not yet updated for 2015, however for a wider context here is a plot from their site for data to 2014.

Global temperature is increasing apace with a suggestion of a pause from the early 2000s, that seems likely to be over. However in the Arctic surface temperature data from NCEP/NCAR north of 65degN), there is a stronger impression of a pause, covering the same period but continuing into 2014. Here October to March is used as the Arctic freeze period during which the sun is not present above the horizon. 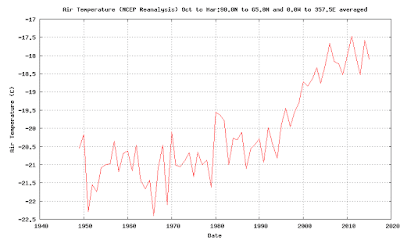 So what of the progress this winter? I have used October, November, December (OND) surface temperature north of 65degN from NCEP/NCAR. 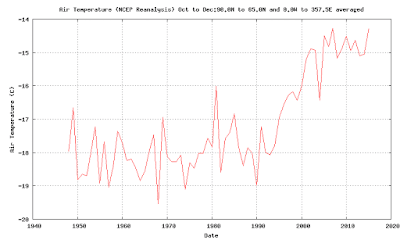 Once again we see the same sort of plateau in recent years, and OND 2015 fits that pattern. I have only looked at one region and from what I found I argued that there it was the loss of sea ice that was driving the warming in January, February and March. I suspect that we are seeing something similar in the wider Arctic warming in the two periods graphed above.

This has implications for the coming decades in the Arctic. Winter ice growth is largely determined by winter cold, the less cold winters are the less the thickness of first year ice at the end of the winter. A linear trend of the NCEP/NCAR data, or a concentration on the 3degC increase between 1990 and 2005 would suggest massive winter warming, the implication from this would be a substantial drop in winter ice thickness.

However what has happened is a levelling of winter temperature for about the last 10 years. And the loss of volume (hence thickness) over that time has largely been due to the long term trend of loss of thicker multi year ice, with a levelling in that since 2007. PIOMAS Gice is explained here. 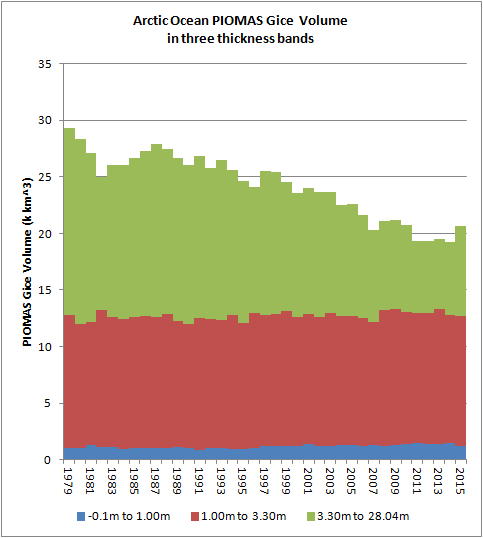 Looking at thickness for December which takes us to last December (2015). 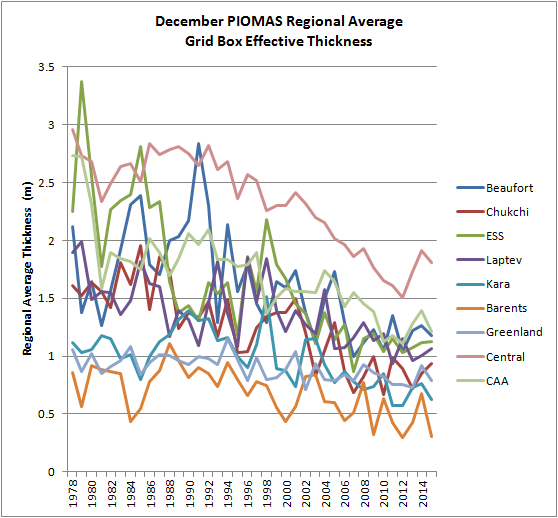 So there is no indication of a drop in winter thickness/volume that would portend a rapid loss of Arctic sea ice.
Posted by Chris Reynolds at 09:27