UK precipitation data has now been updated for 2015 through to December. December 2015 is the wettest of any of the 1272 months from January 1910 to December 2015, at 230mm this is about 15mm above the previous such record set in November 2009. The current El Nino probably plays a role, but such short term issues do not concern me.

This pattern does not appear in the monthly timeseries of UK precipitation, nor does it appear in the England/Wales/Scotland regional data. However focussing on regions or months and ignoring this strong pattern in the wider data is a classic case of failing to see the wood for the trees (wood as in forest). It only rains when conditions are right, sometimes it rains little, some regions like the South East of England have been undergoing dryer, not wetter weather. All of these factors are averaged out by stepping back and taking the wide view of annual precipitation over the whole of the UK.

There seems to be a shift in the above data in 1998, I am not convinced about that. I think it is feasible that higher rainfall may have onset earlier given slightly different conditions, indeed, note that since the 1970s anomalies have been generally positive. This is similar to the early part of the series which plays a strong role in setting monthly precipitation records, for example the August record was set in 1912, the September record was set in 1918. However what has happened in recent years is truly unprecedented.

To get a numerical grasp on the data in the first graph I have set out two time periods, before and after 1990. This is a conservative choice that understates the change since 1998 but happened to produce numbers amenable to an analogy of dice, also sticking to decades means the uncertainty around the 1998 shift, so I stuck with it. 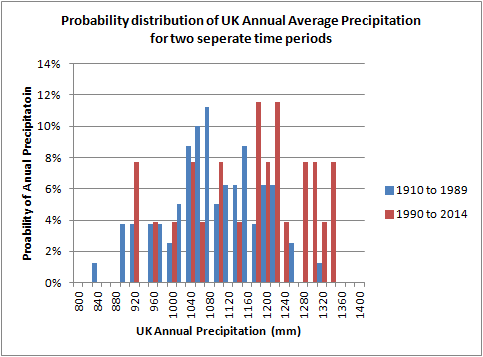 
Note: Strictly dice is the plural of 'die', however the usage in common English now seems to favour dice as the noun for both plural and singular, so I have chosen that common vernacular.
Posted by Chris Reynolds at 12:13

Hey Chris,
I wanted to know what your thought was on the Arctic sea ice extent being at or near the lowest for this time of year. Do you think this trend is going to continue for the rest of the year, or is this just a temporary blip due to that huge storm over the North pole?

The relationship between overall extent now and that in March follows the long term trends of loss in both periods, but is not strong enough to narrow down the odds any more than common sense expectations: A record low at minimum (March) is possible, but not guaranteed.