Anthropogenic Climate Change and the flooding in the North of England

I cannot really add much more than my recent comments on the Cumbria floods of early December, denying a role for AGW really isn't sound as I explain in that post. However it is an issue worthy of some comment.


On Boxing Day (the day after Christmas Day), a frontal system lined up crossing the UK leading to a very heavy rain all day long, and during the preceding night. As I was with family for Christmas I wasn't set up to collect images, but the main player in the rainfall was a plume of warm air from the coast of North Africa driving up to the UK and meeting a cold front.

As a result we have seen what in some towns looks to be record flooding. The Government are jumping on the phrase 'unprecedented' flooding probably for political reasons (attacks of not doing enough). 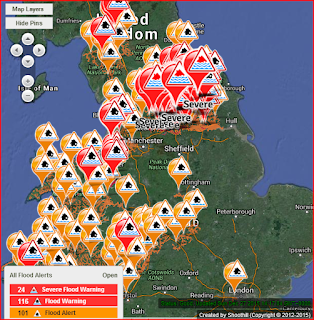 Map of flood warnings in the North of the UK (BBC).

Emergency Services and Army rescue some of those affected. (PA/John Giles)

So that's an outline of the situation, happening just three weeks after the previous record rainfall and ensuing flooding event in Cumbria.

Last night on Sky News's newspaper review had Robert Fox, Defence Correspondent for the Evening Standard and another commentator. Robert Fox said words to the effect that; 'The game is over for the climate change deniers'. Certainly that position is becoming less popular in the UK, however there remains a fashionable stance of climate change denial, whose adherents seem to think it makes them look clever. Despite that issue, the ongoing nature of anthropogenic global warming makes the sidelining of climate change denial an inevitability. Most people are more impressed by personal experience than by any amount of hard data, and as we enter the age of consequences there will be more and more personal experience for more people.

This December, weather related disasters in recent years (locally and globally - Global Weirding), and the upward shift in UK rainfall, has also given me cause to reflect on the 2 degC global warming limit as being 'safe'. This year will end at well under 1 degC, despite being virtually certain to be substantially above the previous record warmest year of 2014. It will take another decade to regularly hit 1 degC.

2 degrees C global warming is not safe for all, it is a level of warming that gives an 'acceptable' level of casualties, but how are we to judge what is acceptable? And in making that judgement what moral debt to we owe to the 'casualties'?
Posted by Chris Reynolds at 23:19

Eventually the snow turns to rain.

'Storms of my Grandchildren'? Seems it could have been titled 'Storms of My Children' or just 'Storms for Me'.

My wife pays little to no attention to my climate change ramblings. But even she was impressed by the arctic temperature forecasts for this week and the nullschool weather map showing a single storm front from Spain past the north pole.

Frank really is a monster, I am unsure as to the impact on the sea ice. That depends on how much melt happens and there is no precedent I am aware of for rain on the ice mid freeze season.

Reviewing the real-time buoy data the spike in temperature is short-lived; about 24 hours. Still, temperatures above freezing at the furthest north latitudes in the dead of winter are unprecedented.

To me this is a harbinger of things to come and plays out just as Judah Cohen put it three years ago:

"In my mind there is no doubt that the globe is getting warmer and this will favour warmer temperatures in all seasons and in all locations; however, I do think that the increasing trend in snow cover has led to regional cooling as discussed in the paper and I see no reason why this won't continue into the near future. Also if it continues to get much warmer in the fall, precipitation that currently falls as snow will fall as rain instead, eliminating the winter cooling."

Combine that with Hansen's 'Storms of My Grandchildren' and what we're seeing now with Frank and I think people who blow Hansen off or think change will be slow are going to be rudely surprised. My experience over the past 25 years watching the arctic is that it's changing on timescales much faster than the consensus ever considered.

All we need now is for the 20 or 30 known explosive methane hydrate holes in Siberia to suddenly multiply into a few hundred and we'll know just how badly we (collective humanity) screwed up. I'm not sure if there's a Montreal Protocol-type moment that can make the world collectively move to a war-time footing against climate change. I really believe that's the only thing that can prevent ridiculously insane climate changes before the end of the century.

I'm still not convinced about methane being the major problem, feasible emissions seem dwarfed by anthro CO2 for the foreseeable future and as a transient species any large outburst will have limited time duration of impact before it is subsumed into the background CO2. I am however really starting to wonder whether the intensification of the hydrological cycle will prove to be a bigger problem than many appreciate (including me).

This data should go into a spreadsheet OK, but the format is poor here.

How does this feed through to flooding occurrence probability?

What is going on in the rest of the world?

Maybe the proper term should be 'disturbance of the hydrological cycle', because (worldwide) some regions are suffering severe droughts and fire.

I have always taken it that when the Intergovernmental Panel on Climate Change talks about the threshold for 'dangerous' climate change, they mean 'dangerous to governments', almost by definition.

I'm not sure what changes happen behind the WG1 Scientific Basis and the politically 'adjusted' statements of the IPCC. WG1 is the report produced by volunteer scientists, and I consider it to be the part of the IPCC output that is trustworthy. I'm also not sure what led to the adoption of the 2degC limit by the recent IPCC sitting - did it come directly from WG1?

There is a paper by Schneider & Lane here:
http://stephenschneider.stanford.edu/Publications/PDF_Papers/Schneider-lane.pdf

This seems to be a good rundown of the complexity involved in determining dangerous anthropogenic interference with the climate system. Figure 4 sums up why I don't say very much about long term impacts, it's way too uncertain.

Anyway it seems that they originally had no definition of dangerous, the situation now is related to determining vulnerability. But as I have never read any output of WG2 (Impacts) I am still not sure how that all works out in terms of determining 'dangerous', and I am really too busy to properly engage in Arctic sea ice (day job pressures), I am certainly too busy to do that subject justice.

So after all that waffle I can only conclude by saying: I don't know.

Thanks for the paper link.

Can you explain in detail how did Emergency Services and Army rescue some of those affected? I'll be glad to read or to hear this! Moreover, I found one post - you may read it here: http://bigessaywriter.com/blog/climate-changing-or-main-problem-of-the-21st-century. All aspects are well-described!