In October I posted the results of calculations that show that 2015 is very likely to be a new record warm year. That was based on data to September, now I have data to November and 2015 will be a new record likely by a massive margin.

I have once again used the GISS LOTI data, which is the most open dataset (data and  code), and the widest coverage (HADCRU neglects the Arctic). Since the Fu/Johanson paper I have largely ignored the use of satellite datasets with respect to global warming trends, claims that satellite data is better than surface data like GISS LOTI are a sound way to spot a deluded bullshitter who has lost the argument but is too stupid to realise it. 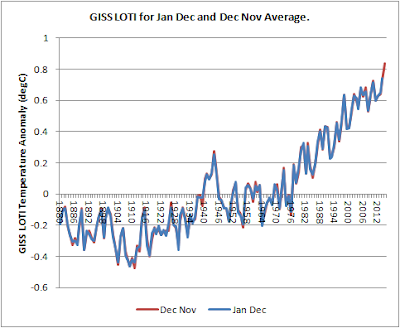 Considering the difference between the two annual periods, the maximum difference is 0.053degC, the minimum is -0.043degC, and the standard deviation is 0.017degC. As in my previous post, I have used the differences of the two annual periods to create a histogram of those differences, this histogram is converted to a probability distribution (normalised to 100%) and is applied to the December to November average for 2015 (Dec 2014 to Nov 2015). This results in a probability distribution for prediction of the 2015 global average temperature anomaly, the actual figure will be available in mid to late January. 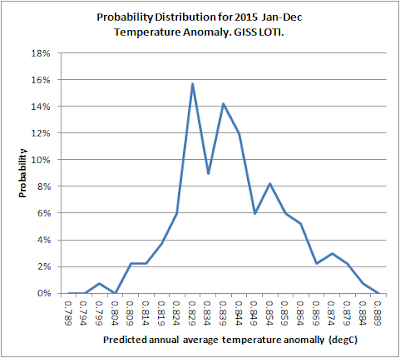 Between 1880 and 2014 the lowest difference between the Jan to Dec and Dec to Nov annual average temperature is -2.49 standard deviations, it would take a difference of -5.55 standard deviations to get 2015 down to the previous record temperature in 2014. Put another way, the temperature anomaly for December would need to be -0.4degC, the lowest temperature anomaly since 1975 for any month was -0.26, so far this century no month has had a negative anomaly. So it is a virtual certainty that 2015 will be a new record by a substantial margin.

So how will this leave the ranking of warmest years?

What does this mean for Arctic sea ice?

Sea ice loss is driven by the increase in global temperatures (ref), via direct and indirect effects and amplified by processes within the Arctic sea ice / ocean system. However one year of increase in global warming seems to be an insignificant factor compared to weather within the Arctic in spring/summer for a particular year. Detrending by interannual difference using annual average temperature and the monthly average September extent, the correlation between the two datasets is just +0.33, i.e. a warmer year than last year leads to more sea ice than last year, this relationship is not statistically significant to a degree I find persuasive so in my opinion it should be discounted.

I have read some fellow amateurs enthusiastically expressing the idea of an ENSO influence on sea ice. There is an impact on regional scales (ref), but I have never found a robust impact on the September minimum. As yet another angle on this, I have taken October to December Nino 3.4 data and the sea ice extent data for the following September, both series are detrended by interannual differencing and plotted on the following scatter plot. 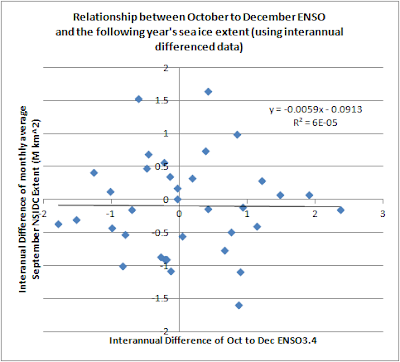 This scatter plot has a linear trend fit, with an R2 of 0.0, and a slope of 0.0, which is similar to every attempt I have made to identify a role for ENSO in the September extent. I find no relationship at all between the ENSO state at the end of the year and the September extent of the following year.
Posted by Chris Reynolds at 02:09