GISS global temperature anomaly data is out for April. The last 7 months have been above 1degC global anomaly.


From the GISS site here is their plot of temperature anomaly, the anomaly is just the difference from data for 1951 to 1980. 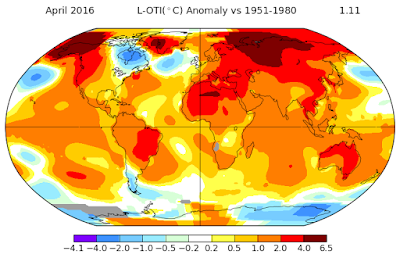 And below I have plotted the full series of all months. 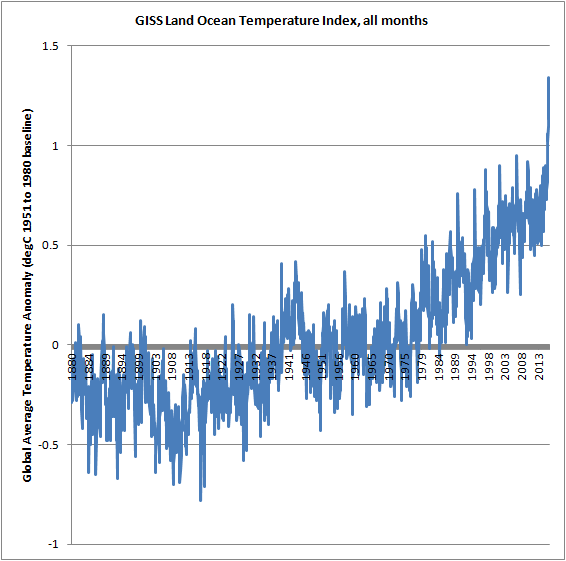 The last 7 months have been over 1degC anomaly for global temperature. The April temperature is amplified in the far north, however this is in line with other recent winters in the Arctic. 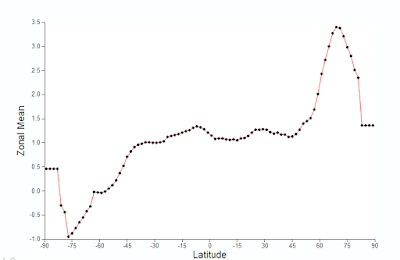 Looking back to January to March of this year we see the staggering Arctic Amplification of this winter. 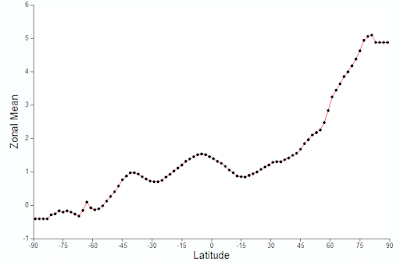 Zonal averages are only available in annual data for GISS, however NCEP/NCAR reanalysis is in reasonable agreement with GISS. The above shown polar amplification for January February and March caused the pole-equator temperature difference to exceed -10% of the 1951 to 1980 baseline for the first time in the data. Surface temperature, Pole = north of 65degN, Equator = -22.5 to +22.5 (nearest grid boxes to 23.5 latitude). 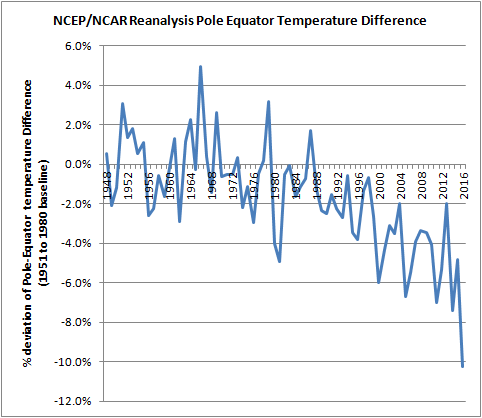 All of which should make the following graph less of a surprise. GISS Land Ocean Temperature Index for the Northern Hemisphere was just below 2degC anomaly in April (actually 1.89degC). 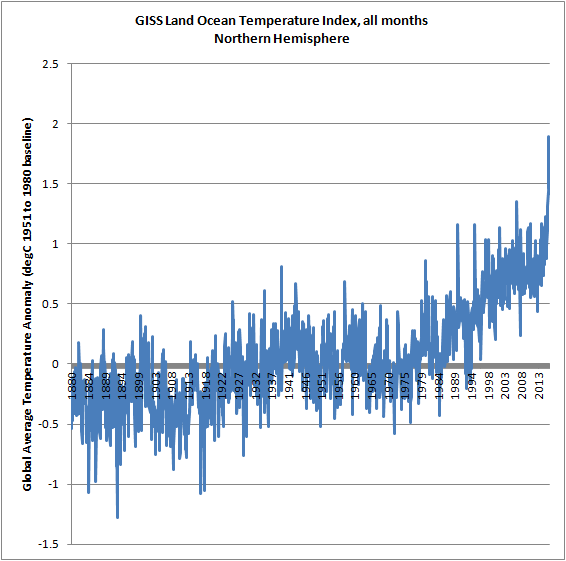 The ongoing El Nino has a role in the record smashing warmth, however it is not a sufficient explanation because we've had El Ninos before without the sort of insane temperature increase we've seen this year. It seems to me that the impact of this El Nino has been massively amplified by processes in the New Arctic. I say the New Arctic because in terms of sea ice in the Arctic Ocean and snow cover the Arctic has now entered a new regime that probably hasn't been seen for some 6000 to 8000 years (since the end of the last ice age).

What does this mean for the 2016 global temperature?

The first four months of the year in excess of 1degC will strongly increase the chances of 2016 being a new record warm year. I have taken GISS monthly Land Ocean Temperature Index data and proceeded as follows. Each month of each years 1880 to 2015 has been calculated as the difference from that year's average temperature, so as to baseline them all to zero annual average. They have then been added to the average of 2011 to 2015 pentad annual average temperature to set to a recent baseline. Then January to April for all years is replaced by the January to April data for 2016. Finally for each year 1880 to 2015 the average temperature is calculated and the resulting series of simulated 2016 temperatures are presented below as a histogram normalised to 1.

Vertical axis is probability normalised to 1, the horizontal axis is GISS temperature (predicted). 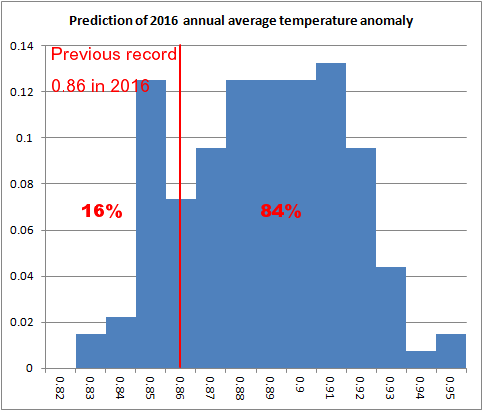 The previous record in 2015 is marked by a red vertical line, the sum of probability for 0.86degC and below is 0.16 or 16%, the sum for temperatures above that is 86%. So it is very likely that we will see 2016 break the record for GISS global average temperature.

And what does this mean longer term? Every 5 year period (pentad) since 1975 has been warmer than the preceding 5 year period. If we take the singular value for 2015 then it's a new record by a long shot,obviously further years up to 2019 may be cooler, lacking an El Nino. But if 2016 meets or beats 2015 it increases the chance of a new record warm pentad. 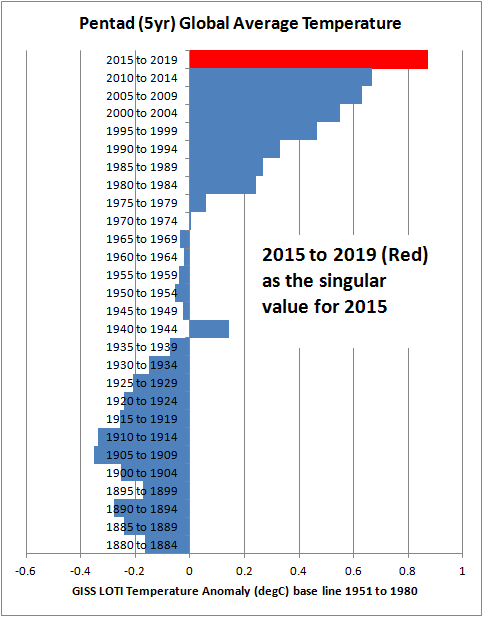 "At some point it has to dawn on even the most dull minded idiot that we have a problem,"

Wanna bet? I'll wager that there is literally no climatic event that would budge the WUWT crowd, for example. They'd still be saying the scientists were crooked if the WAIS slid into the sea next week. And anyway, sunspots!
-
Adam R.

But the stridency of their squawking makes me think many of them really know the game is up, they're just so wedded to their beliefs they can't change. I see the same with the god squad....

I'm not sure which stations all the various datasets use, but Olof over at Nick Stokes Moyhu has noticed that GHCN has been dropping arctic stations when their anomalies hit +10C for 6 consecutive months. When the algorithm was written this probably seemed like a decent data quality safeguard, but this year we've actually seen stations dropped because their temps are legitimately too high :)

I'm sure the usual suspects are screaming about the conspiracy to hide the incline :)

Oh, I'm sure they are not being at all biassed.

Thanks I didn't know that, my rough calculation based on data since 2000 shows that the ratio of global to Arctic NCEP/NCAR temperatures is around 3 i.e. Arctic Amplification seems to have been level at about a factor of 3 since 2000. Might be worth a blog post, I'm attacking my approach before doing so.

On an unrelated note, our accreditation audit starts next week. I just finished reviewing all 241 uncertainty budgets - everything from sand rammers to deadweight testers to 26 GHz S-Parameters.

Damage wasn't too bad - only three budgets that glaringly need to be rewritten and two new ones we'd like to add.

Chris,
Do you think the 2015-2019 range will be that far over it?
Anyway, I'm somewhat optimistic given Paris and renewables development. Of course, a Trump election could derail that (not likely he wins in my opinion).

We're due in the Autumn. I am just not getting the time to review at present, I had to bail my lab out by calibrating on Friday, as a consequence I had to work till after 7pm. But I have a new member of staff, so he should be contributing well over the coming weeks.