In 2014 I posted about an apparent oscillation of August extent loss, I updated this with preliminary data in August 2015, but failed to return to the issue to see how things actually turned out. As this issue has a bearing on the post that follows, and prompted by reading a comment at Neven's blog about claimed cycles in sea ice, I am posting this to update data on last year's August extent loss.

In recent years, with the transition to a predominant seasonally ice free state of the sea ice in the Arctic Ocean a large pattern of variability has accompanied the increase in loss of sea ice extent through August. 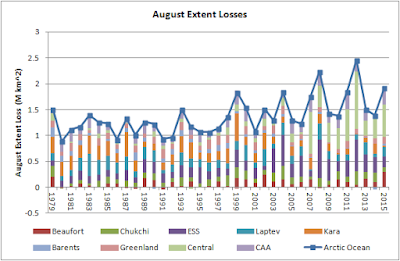 Since 2004 an apparent periodic behaviour seems to have emerged from the noise of interannual variability. This has a period of four years, three complete cycles have happened so far, they are shown below, with each year of the cycle numbered. 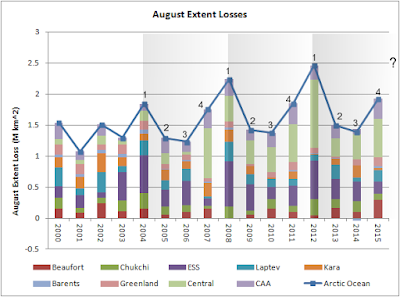 Notably the peak years are associated with large losses in the East Siberian Sea, which dominate losses in the Chukchi Sea for the amalgamated region of those two seas shown in the graph below (red). 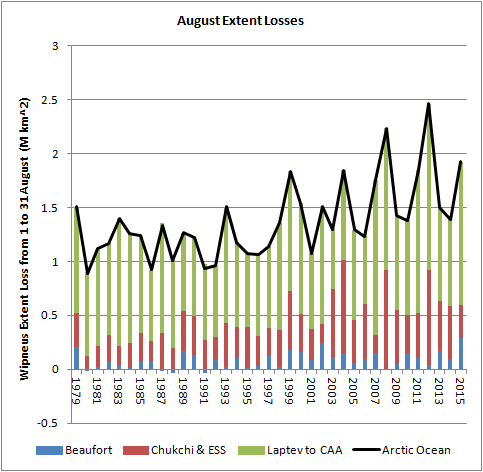 I had pondered whether this was due to cycling time of multi-year ice within the Beaufort Flywheel. I am not convinced by this idea now, but must confess I have not returned to the issue since last August. Note that in cycles 2 the peak is in 2008, while in cycle 3 the peak was in 2012, so this seems unrelated to the thickness growth feedback.

So I don't know why this is happening, but if it is real then this year (2016) should be a year of massive August losses, more than double that expected for the 1980s.
Posted by Chris Reynolds at 09:27