Temperatures over the ice: Normal for the new normal

Temperature has been obtained from NCEP/NCAR as timeseries and composites. There is evidence supporting suggestions of melt ponding along the Alaskan coast, but much of the pack is cool/normal for recent years. Click on images to enlarge.

The timeseries cannot be calculated for a period, just on a monthly basis, so here is the timeseries for May, upto 2015. 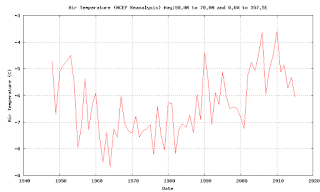 The years 2010 and 2015 are a good place to start as upper and lower bounds of average May temperature.

The low overall extent is due primarily to Barents and Bering and the Greenland Sea, Beaufort continues to fall. Chukchi is starting to fall as normal, ESS remains flat at peak winter extent, likewise Laptev and the Central Arctic, the CAA is falling as normal. Within the Arctic Ocean Basin (Beaufort, Chukchi, ESS, Laptev, Central), only Beaufort is abnormally low and falling abnormally, compactness follows this pattern.
Posted by Chris Reynolds at 02:47

Chris, I'm not sure what this tells us. We know that the winter months show large increases in temperature, but once the sun appears and we get closer to the solstice the temperatures become thermodynamically constrained due to ice-in-water.

This is obvious by looking at the series of DMI N80 temps where the first few months of the year show large deviations from the baseline, but at the sun's first appearance the temps begin moving closer and closer to the average until there is very little deviation at the temperature peak.

Winter is warmer, but summer is not. False. Winter is warmer, but our measurements of summer are confounded by the constraints of ice-in-water. I suspect that the change from winter difference to summer equality is fairly linear - with one discontinuity at approximately -14C.

"Chris, I'm not sure what this tells us."
It tells us that the extreme warmth over winter doesn't seem to be persisting, at least not over the short period considered.

"What might be more informative is to look at the progression of temperatures at different temperature levels by date."
Well that wasn't what I was doing, I was just curious as to how temperatures so far in May are doing. But that does sound interesting, let me know what you find. I too expect a narrowing of winter cold since the winter cold has warmed.

"Winter is warmer, but summer is not. False. Winter is warmer, but our measurements of summer are confounded by the constraints of ice-in-water."
Well no. We use a stirred water bath to get a reasonably accurate 0degC (not as accurate as a triple point cell with VSMW), the temperature really is zero, and remains such until the ice has melted. I think the point you are making is that the temperature hides the heat flux increase, I agree. Summer PIOMAS melt might be usefully gauged as joules.

I don't get why there would be a discontinuity at -14degC.

Chris - at some point there has to be a discontinuity when you're covering a temperature range and area that will see the ice/snow undergo a phase change.

When there is not quite enough energy at 85N to begin melt, 80N is probably already starting to melt. At some point in time we have the largest amount of area beginning to see this phase change. It is at this point in time we should see a discontinuity in an otherwise rather linear temperature trend of increasing warmth. The reverse effect is also noticeable in the fall -- but not nearly as clearly.

"It tells us that the extreme warmth over winter doesn't seem to be persisting, at least not over the short period considered."

I.e., looking at average July temperatures tells us the winter warmth does not persist. This is the argument that skeptics use when they look at DMI N80 graphs and summer temperatures that don't go much above 0C. My point is that as shortly after the sun appears we begin the trek towards 0 anomaly we find shortly after mid-summer. Temperatures become less and less informative.

Yes, there will be a discontinuity, but why at -14degC?

The winter warmth actually declined in April, my data in the above post merely asserts a continuation of this decline.

The first column is the average anomaly from 1951 to 1980 for the 10 year period 2015 to 2006 north of 85degN in ncep/ncar (no ocean anomalies to skew the result). Columns are months, January to May. The second column is the deviation of the 2016 anomalies from that 10 year average

In the first column the average anomaly falls in May, this is the effect you talk of regards anomalies falling as surface melt pegs temperatures to zero (I think this is happenin to air before it gets into this region as this region is still -19degC). That april and march have near identical anomalies shows that the winter amplification of warming is still active in both April and May.

Now to the second column. By April the temperature anomaly from 1951 to 1980 has dropped off from that in Jan to Mar.

Therefore what I outline in the main post is merely a continuation of the April drop off of anomalous heat, and is not due to the summer reduction of anomalous temperature due to melt.

The process that drove the extreme winter warming is over and the temperatures are now at more normal levels (for recent years - which are extremely warm n the long term context).

I forgot to add, Eurasian snow anomalies are not exceptionally low for the last 10 years they are amongst the lowest, and in any case snow loss over land will cause marked warming due to snow/land albedo amplifcation.

Chis integrating over the entire area with sunlight, insolation, starting temperatures, etc. is best left to models. But simply looking at DMI N80 temperature graphs for the post 2000 era can be informative. What I've always seen as the typical discontinuity occurs most frequently and most pronounced at approximately 260K.

I think it reasonable to use DMI temperatures as a warmth indicator until at least day 100. After that it can be problematic. Obviously by day 140 or 150 it has become of little use. In other words, DMI temps for April and May need more than just a simple numerical comparison because they are losing strength as an indicator. There is a complex story being told between day 100 and day 150. The only part of the story that I can grasp yet is that there is usually a discontinuity (simply due to the physics of melting snow/ice) and it usually occurs around 260K on DMI.

Counterintuitively, the most northern half of the area north of 80N sees 24 hours of sun in its entirety earlier than the southern half. This especially confounds any attempt at linearizing the effects because the northern half should start with lower temperatures, thicker ice, and is unlikely to melt early despite seeing 24 hours of sun earlier. Yes, I should be working with insolation rather than sunrise/sunset -- but I'm too lazy to use a spreadsheet, I do that all day at work.

Naively, we know there's an approximate 3 week delay between the solstice and the mid-point of peak warmth in DMI N80 temperatures. With the southern half of the area north of 80N seeing 24 hours of sun on day 105, I'd (naively) expect to see the discontinuity around Day 125.