Looking at both area and extent for September from the NSIDC Sea Ice Index I have calculated the interannual differences and expressed them as their absolute values (i.e. no sign, + or -). Interannual variability increased in the late a 1990s due to dynamic impacts such a Fram Strait export, due to the Arctic Oscillation (and the Pacific Decadal Oscillation). 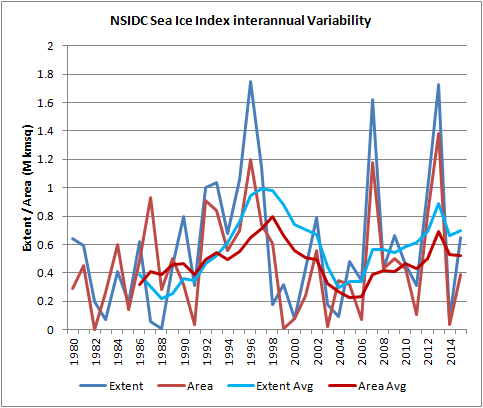 The seven year average suggests a recent increase in variability, however this is almost totally due to the 2007 and 2012 record lows, and the increase of extent in years following those record years.

Then the initial thickness is reduced each 'year' by 0.01 thickness units, this simulates a thinning of the ice model, at a very slow linear rate.

Each of the 30 'boxes' of ice is set such that it has an area of 1 if the difference between initial thickness and summer loss of thickness. i.e. if there is even a small amount of ice the area is 1 and counts towards overall area. The overall area is calculated by summing the area of all the boxes.

20 runs of the simple model have been done. Here is the result of all runs as initial (winter) thickness declines from 3 thickness units to 1 unit. 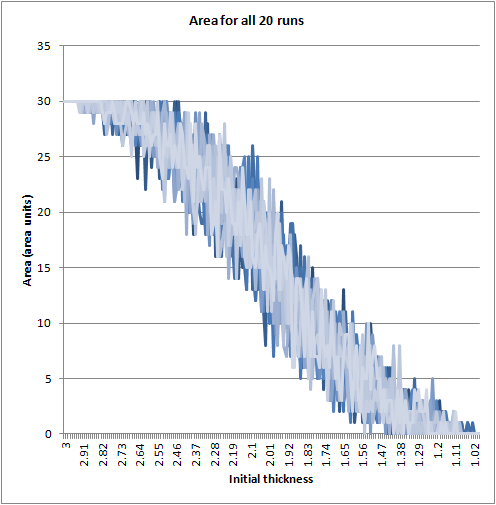 The application of a random normally distributed noise to the calculations introduces substantial variabilty to the trajectories of individual years. Those used to following sea ice might see a hint of a sigmoid curve. I shall return to this issue shortly. What is notable is that the steepest curve is at 2 thickness units, which is the central value of the summer loss of thickness.

The following graph is the average area of the above 20 runs for each increment together with the line defining the underlying decline in initial thickness (before the random variation is applied to each of the 30 boxes). 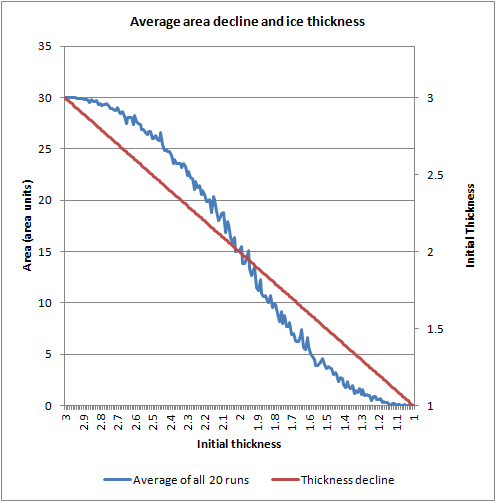 So the linear decline of thickness (red) is being transformed into a sigmoid decline of area (blue). This cannot be due to any feedbacks in the ice, the model contains no such physics.

Consider the behaviour of my illustrative model with no noise. Area will be 30 until the thinning of initial thickness goes below 2 thickness units, at which point summer thinning removes all ice and the area crashes abruptly to zero. This gives a step function with a value of 30 above a thickness of 2 and 0 below 2.

When I introduce noise (weather) into the picture the effect is to introduce a normal distribution bell curve. Essentially what is going on is the the step loss of area where initial thickness equals summer melt is smeared (actually a convolution) by the bell curve of the random noise and the result is a curve similar to a sigmoid function.

So back to the original purpose of the post, a supposed increase in variability as the pack thins. I have taken the 20 runs, calculated the average interannual difference for all 20 at each increment of initial thickness and the result is plotted below. 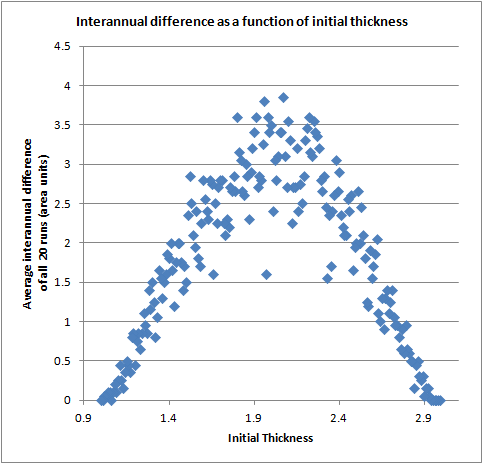 As the ice in this simple illustrative model thins to around the summer thinning amount, the interannual variance increases and peaks as summer thinning equals winter initial thickness.

Across much of the Arctic Ocean at present, peak winter ice thickness in April is very close to summer thinning. There has been an increase in interannual variability but this is mainly related to two record crash years, it might be that we need more years of data to see the real pattern. The illustrative model here uses a shallow decline of thickness over what is in effect 200 years, the actual transition to a seasonally ice free state is progressing much faster.

One implication is that greater variability from year to year does not necessarily herald a rapid collapse of the Arctic sea ice, since this is seen in an illustrative model with a strictly linear decline in initial thickness. It is also interesting that the sigmoid shape arises without any thermodynamics in this simple illustrative model.
Posted by Chris Reynolds at 02:14

Been puzzling over this as I would also expect an increase in interannual variability. Could it be that the increase manifests as a step change, beginning with the factors you note for the late 1990s? That's not what your model indicates, though. I also wonder whether short-term variability on the order of weeks might be suppressing interannual variability (not just disguising it in the sense of statistical noise). Can't think of any physical reason for this in the form of negative feedbacks, so it's more a notion than a proper hypothesis.

The model is just indicative with a linear thinning. In the event of a step drop of thickness (even in one region) towards the typical summer thinning I'd expect a step increase in interannual variability.

I tend to find gaussian noise smears the average of runs with the normal distribution. But in the past I've used 'weather' plus an annual decrease in volume based on the average yearly volume loss from 1995 to 2010. In an individual run this can lead to very rapid crashes to zero volume, just as it can lead to far less loss than the observed rate in other runs.

I might not fully be understanding your idea of 'suppressing interannual variability'.