NSIDC extent is now back online and calibrated with past data using a sensor on the F18 satellite, so full context over the historical record is now possible. This post is the first post using that data since the failure in early April.

The Peripheral Seas (Peripheral) are Beaufort, Chukchi, East Siberian and Laptev Seas. They are shown in green in the map below. 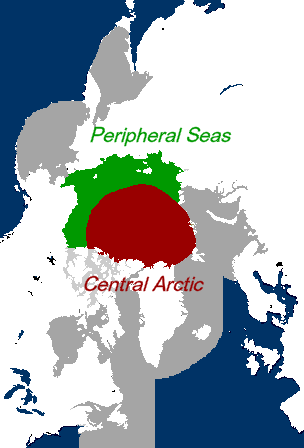 Peripheral is a crucial region for the progression of the melt season as the ice edge must melt through it in order to make inroads into the Central Arctic and drive a record low September extent.

Currently, after initially being outside of the envelope of previous extent for the Peripheral region, extent is now back in 'known territory'. Indeed overall extent has increased marginally. 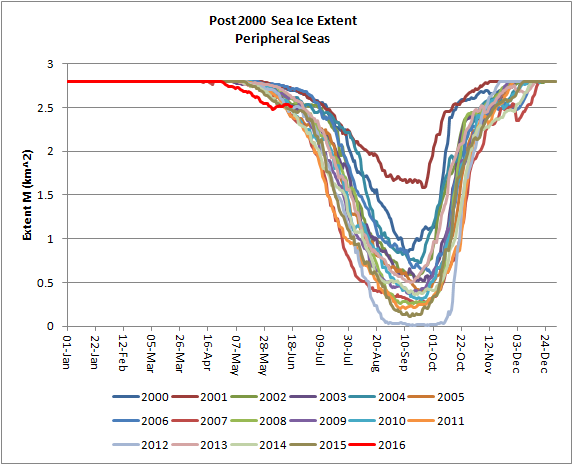 I will get into the reasons for all this shortly. However a digression into compactness is warranted.

I have previously proposed Peripheral compactness as a predictor of record lows. The idea is that very low compactness in late June predicted the 2007 and 2012 crashes. The following graphic shows compactness anomaly for 8 to 17 June from 1979 to 2016. 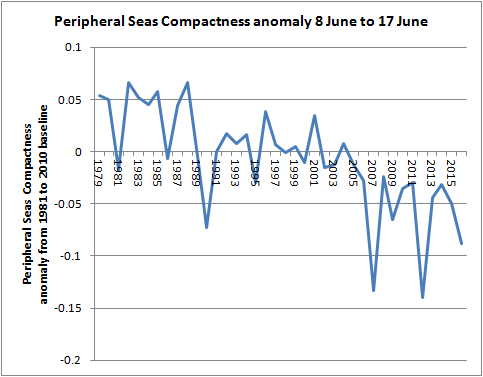 Compactness is very low at present, this is largely because of Beaufort. The low compactness follows the 2007 crash, so the data record is short (10 years). However Beaufort compactness in 2008 was very low, being comparable to 2007 and 2012, so compactness of Beaufort does not look to be a good predictor of overall low extents in late summer.

Looking at the current day to day changes in compactness anomaly and comparing to atmospheric state shows that the interpretation of current low compactness as indicative of a coming record low in September 2016 is probably not sound. 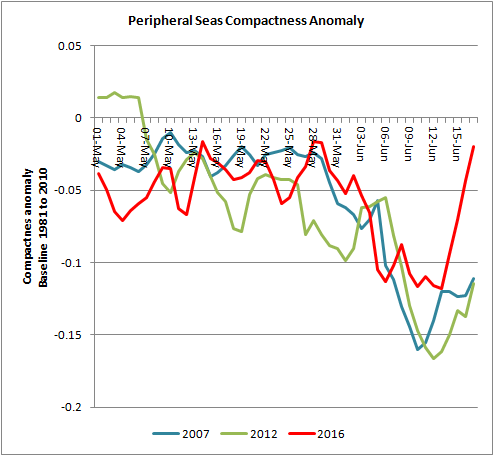 2007 seems to track 2016, however in 2007 the Arctic Ocean was dominated by high pressure, while in 2016 low pressure dominates. What has driven the drop in compactness in the Peripheral region this year is not thinning of floes due to melt, or melt ponds, but a low pressure dominance. As will be seen this shift to low pressure has been the driver of a substantial change to sea ice conditions.

Before I move on, I can't robustly explain the uptick at the end of the above compactness data for 2016 because this is from 13 June to 17 June, and NCEP/NCAR reanalysis is only updated to 15 June as I write.

Now to turn to extent for the two key regions. The Beaufort Sea is severely damaged, this is a result of winds over the winter, as shown previously. However as also suggested previously, a stall has happened in Beaufort, and the early start is about to carry extent back into the envelope of previous years. 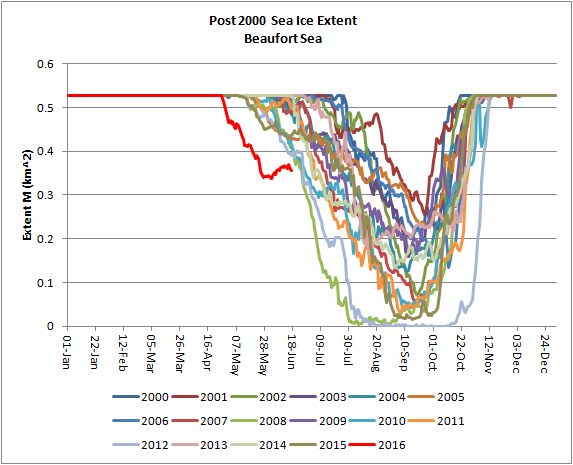 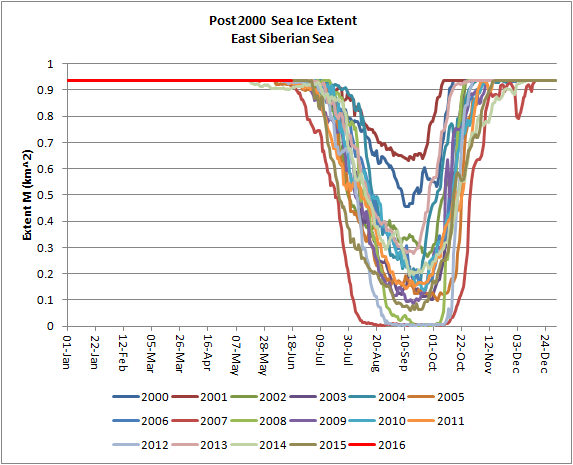 Breaking down the Peripheral region into two regions we have the Siberian region (East Siberian and Laptev Seas) and the Alaskan region (Beaufort and Chukchi Seas). It is clear that they are showing markedly different behaviours. Expressing this data as an anomaly from the 1981 to 2010 period, which is used by NCEP/NCAR reanalysis, allows easy comparison of what unusual weather drives what unusual ice state.

Of course Beaufort dominates the negative anomalies of the Alaskan region, but as will be seen, the drops in that region's anomalies happened together with high pressure dominance. But after 1 June 2016 the anomalies rose back towards more normal levels. 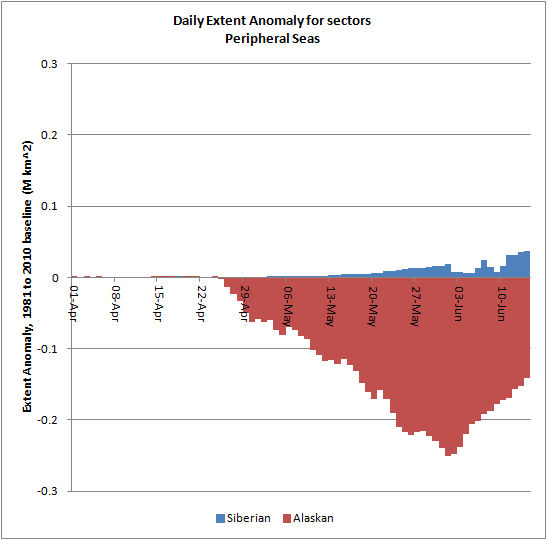 Looking at the seas within those regions, the Alaskan region is seen to have a drop until 26 May, after which there is a climb towards more normal levels of extent. This might be in two parts, from 26 May to 1 June being slightly shallower, followed by a steeper climb following 1 June, which is seen in the Chukchi Sea as well. This might be due to the multi-year ice barrier from 26 May until at 1 June the atmospheric regime shifted to low pressure. However the data merely might suggest that, it isn't a strong assertion. 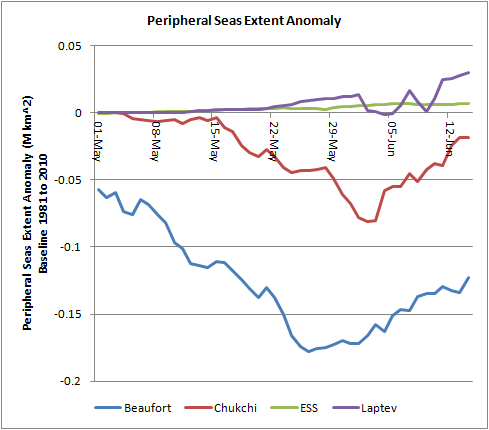 From 29 April to 31 May air temperatures just above the surface (925mb) were above average across the Arctic Ocean.

And during this period high pressure with clear skies dominated the Arctic Ocean.

Then after 1 June temperatures dropped, with much of the Alaskan region being below average temperature, while the Siberian coast gained peripheral warming from the intense land warming over Siberia.

After 1 June low pressure dominated the pack, with two dipoles dominating. One dipole is along the Siberian coast (flow from Barents towards the Bering Strait) the other along the north of Greenland and the Canadian Arctic Archipelago (Flow from Alaska to the Atlantic).

However what is key here is the impact of wind movement on the ice. Due to Ekman transport the ice moves to the right of the wind direction. In a high pressure system the general wind movement is clockwise around the high, Ekman transport is to the right of wind direction in the Northern Hemisphere, so under a high pressure the ice is moved inwards to the centre of the high (convergent). Whereas for a low pressure the ice movement is outwards, away from the centre of the low (divergent). 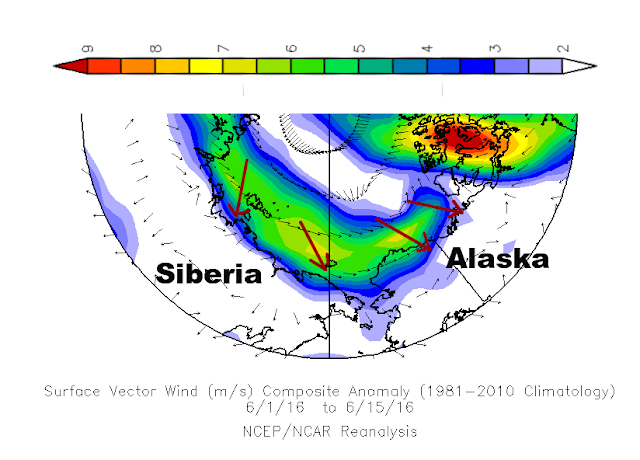 The above plot is for vector wind anomaly, and the red arrows show approximate ice movement to 45 degrees to the right of wind movement (drawn by eye), the net movement in the peripheral seas is outwards towards the edges of the pack. This has been the cause of the stall in extent decline and drop of compactness within the Peripheral Seas.
Posted by Chris Reynolds at 07:21