Now that the PIOMAS main series of total volume is out I can look at what that shows about the May volume loss. This being the first part of the overall spring volume loss.

This May has seen a strong volume loss in line with other post 2010 years. 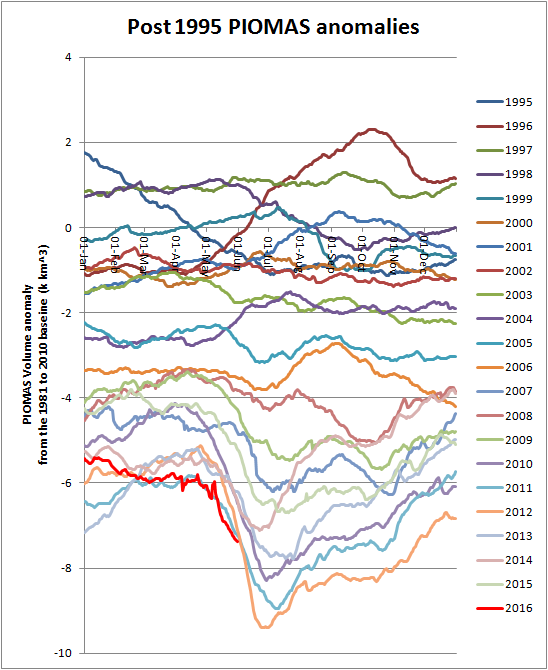 This is quite steep, but unlike 2012 the trajectory appears to be levelling. Nonetheless 2016 has seen the third greatest May volume loss. 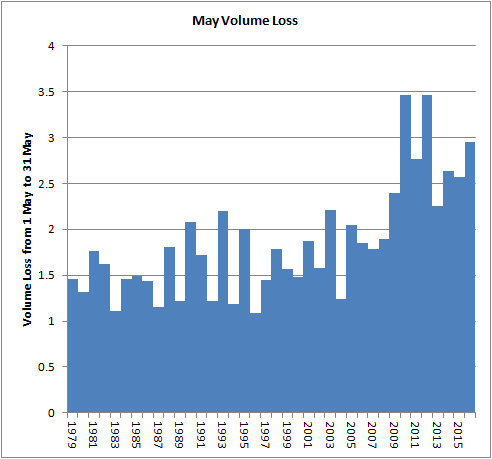 But it is far from as severe as the May volume losses in 2010 or 2012. And this year is markedly different from 2010 and 2012 in terms of where the anomalous volume loss is happening. 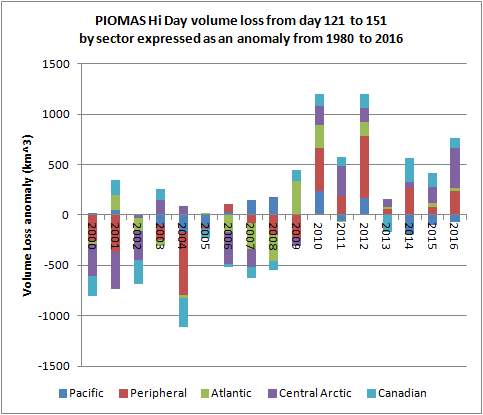 To look at this I have used PIOMA Gice and have calculated the 2007 to 2015 change from day 121 to day 151, then the 2016 difference from this baseline is shown as a stacked bar graph, revealing the change from average in terms of the average. 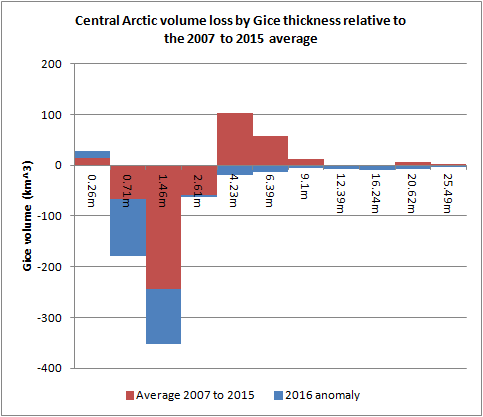 Your last graph is not what I would have guessed from a first glance at Wipneus' animation for May (post #942 in the PIOMAS thread of ASIF; http://forum.arctic-sea-ice.net/index.php/topic,119.900.html). My eye was drawn by the salient band of thinning that PIOMAS models in the white area north of Ellesmere. Taking your analysis into account, a closer scrutiny of the animation shows that much of the anomalous volume loss occurred near the Beaufort boundary of the Central Arctic.

That's a very useful observation. I had wondered if it could be the Atlantic side. Now I look at the animation you refer to I see it's probably both, but I think much is from the Beaufort side.

That said: I need to caution that in Gice those thinner amounts also co-exist with thicker ice within the centre of the pack (FYI between floes). Due to the size of the Central Arctic loss of volume of thinner ice within the bulk of the pack may be a significant factor.

Ah, I hadn't considered the contribution of interstitial thin ice in the central pack. Under some conditions (perhaps melt ponding over FYI, especially while melt ponds around the periphery are draining) it might account for a relatively large share of volume loss. Conversely, it could be a lesser contributor late in the season when bottom melt under the thicker floes predominates. Would changes in concentration provide a clue as to the relative effect?

Intuitively, by late summer most or all of the thin FYI should have melted. But in the PIOMAS model there may well be a gradual topping up of the thin ice by thicker ice having thinned over the season. What is in the model is a thickness distribution within each box and the physics works on all thicknesses.