In the Sea Ice Prediction Network releases this year is a report from Haas et al (PDF). In which they note that elements of the evidence suggest that "that the MYI in the region has the same or slightly smaller chances of survival in the coming summer than it had in 2015." However they do point out that it is more fragmented than in 2015.

This raises a question I have pondered, brought about by the detailed behaviour of melt in Beaufort. I expect near open water condition by September, but I wonder if there will be a stall in extent losses in Beaufort on the way to that state.

Beaufort extent started to fall on 20 April 2016 which seems to be the earliest in the short record of AMSR2 and the longer record of NSIDC Extent (I can't use the latter at the moment due to a satellite sensor failure). 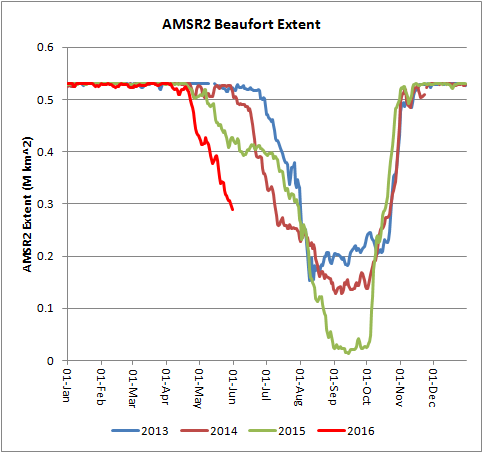 Since then there has been an overall collapse of extent, however this has not been equal on all of the ice edge. Most of the loss has been towards the Chukchi Sea, while polewards the retreat of the ice edge has been limited, or has not happened at all.

In the following graphic I have marked the ice edge in red for a succession of days through May using images from Bremen University AMSR2. The final image shows an overlay of Cryosat 2 thickness in late April, with the band of thick ice (red patches) showing where the multi year ice is. The caveat here is that we don't know how that ice moved through May.

For ease of viewing I reproduce the final frame of the above animated gif below. 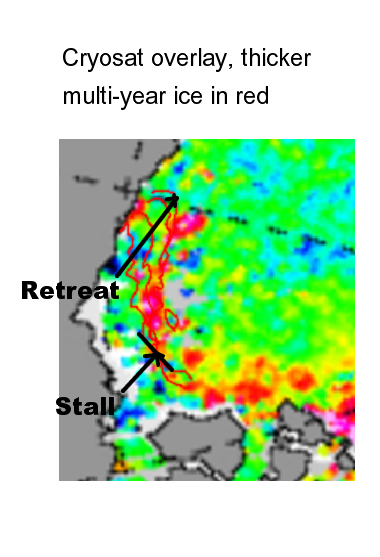 Multi year ice tends to be thicker than first year ice and contains less brine inclusions, so is typically more melt resistant. So the retreating ice edge often stalls when it hits this ice, this is because for a grid box to classify as extent of sea ice it need only have an ice concentration of over 15%, so a region of lumps of ice with 80% open water is classed as contributing towards extent and being behind the ice edge.

What the above shows is that recent losses of extent have mainly happened due to the progression of the ice edge along the Alaskan coast, within a few weeks there will be no more ice left to melt in this direction and the ice edge will then need to spread towards the pole. To do so it will need to pass through the multi year ice, and this may reduce the rate of losses.

However, I don't see this presence of multi year ice as able to cause the sort of prolonged stall seen through June of last year. ASCAT is a satellite radar system, the different backscatter of first year ice and multi year ice (due to dielectric constants) means that this can be used to spot the concentration of multi year ice.

Here is ASCAT from CERSAT on 1 May 2015. Showing a strong presence of multi year ice (green) in Beaufort.

Note that ASCAT detection of multi year ice is impaired by surface melt. However the difference shown above is supported by comparison using earlier dates in winter when there is no surface melt.

If continued the current trend of loss brings Beaufort extent to zero at the end of July, however it may not continue, a reduction of loss rate is possible within the coming weeks. Despite this I still expect Beaufort to be either totally ice free, or almost so, by September, and possibly earlier.

Hi Chris,
What are your thoughts on an extent of around 4.1 this year? That's what I predicted.
Also, do you think the ice could rebound a bit after this year with the La Nina coming in?

I'd say it will be low this year. PIOMAS spring volume loss (ongoing now) will inform me partially, we'll see the first part of that in May's data. Normally NSIDC sea ice compactness would inform later in June - I'm not sure about the data for that as it's affected by the satellite failure. However with area/extent it might reduce the satellite bias...

In short, I'll have a firmer opinion at the end of June.

No argument with your inference of a June stall or a September (near) ice-free condition. But the y/y comparison from CERSAT raises a puzzling question: what happened to all that multi-year ice from 2015, if it didn't rotate into Beaufort?