Previously, 9 years ago, I produced two posts on Open Water Formation Efficiency, here and here. Now, as a bed rock to a series of posts I am going to revisit that issue. First, in this post, I outline a theoretical model to demonstrate the process involved.

So we can say that in this spherical cow situation the open water formation is 100% for April thickness of <2m and 0% for >2m thick. 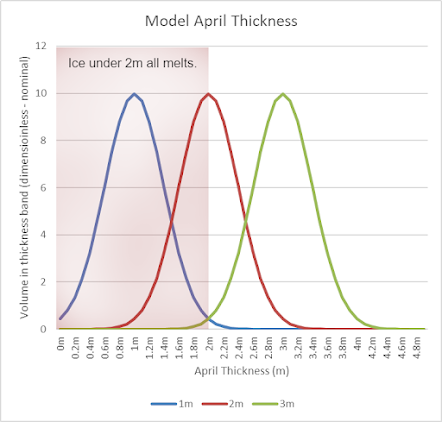 Take the red curve, this is centred on 2m thickness of ice in April, the amount by which it spreads out to the sides is governed by the Standard Deviation, which I have set to 0.4m. Using the red curve we can see that if all the ice under 2m melts out then this distribution leads to half the ice surviving the melt season. In contrast, almost all the ice for 1m April thickness (blue) melts out, and for 3m (green curve) almost none of the ice melts out.
So this gives us a hint of a curve, a 1m open water is almost 100%, at two meters it is about 50% and at 3m it is almost 0%.
I can calculate what happens as I sweep the mean April thickness from 0m upwards to above 2m, technically this a numerical convolution of the normal distribution of ice thickness and the step function of ice melting out below 2m thick. 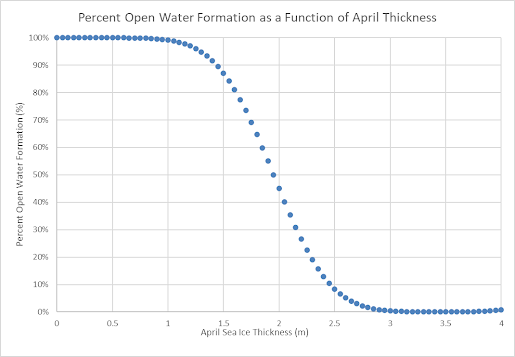 Now, technically the Open Water Formation Efficiency is the ratio: Percent Open Water Formation / April Sea Ice Thickness. However, although the term is useful, the graph isn't in my opinion. The above graph is far more useful as a conceptual tool.
I will be going into calculations of this distribution using PIOMAS and NSIDC data, but suffice it to say for the moment: The slope of the above graph shows the drop of a potential well, driven by Ice Albedo Feedback, which (unopposed) would lead to a rapid crash to zero late summer sea ice. In practice it has been opposed by an equally powerful feedback, the Thickness Growth Feedback.
Prior to the ~1997 to 2007 Rapid Ice Loss Event (RILE) there was a stable state, a potential well, with thick multi-year sea ice and low Open Water Formation Efficiency. During the RILE the powerful ice albedo feedback lead to the BCE Region (Beaufort-Chukchi-East Siberian seas) becoming a killing zone for multi-year sea ice, (not Fram Strait exports). The resultant loss of thicker multi-year sea ice led to a collapse of April thicknesses across the pack and OWFE rose as thicknesses approached the steep curve region in the above graph. This process was only countered by rapid formation of first year ice each year, associated with massive uptake of energy in the melt season and massive venting of energy in the early freeze season.
But the RILE of 1997 to 2007 was a bifurcation event separating two stable states of sea ice. Albeit that the former was in transition towards the RILE and the latter is in transition to a late summer ice free state. 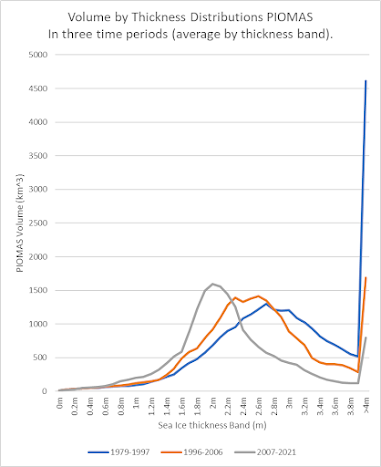