Just a quick first review of PIOMAS data from 1978 to 2021. The results of this preliminary data-dive are what I had expected, which is not good.

The PIOMAS gridded data allows calculation of metrics such as regional volume, thickness, amongst a whole load more. So here's a quick perusal of what the PIOMAS shows, and in a nutshell, my prior expectations are correct, the sea ice pack in the Arctic Ocean is radically different from the past, there has been no recovery from either the 2007 or 2010 volume loss events. Were they tipping points? Not sure on that, I am pondering Critical Slowing and will have more to say on that.

Firstly, the Arctic Ocean is Beaufort, Chukchi, East Siberian Sea, Kara, Laptev and Central regions of the Arctic Ocean. The graph below is average thickness for that region. 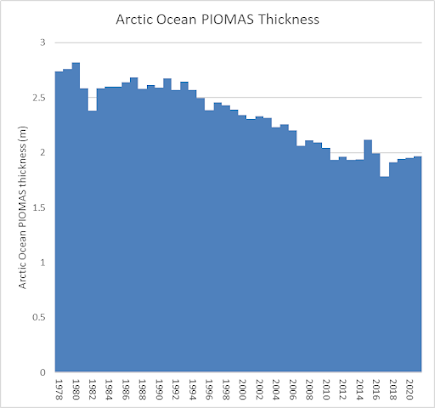 In April the peak of volume occurs, and since 2010 average thickness has been flat at around 2m thick, this is significant. Under the winter cold of the Arctic night sea-ice growth from open ocean by thermodynamic processes is around 2m, this is dominated by the insulating of the ice and is resilient to winter warming to a surprising degree.
So we have a situation as predicted in Armour et al 2010, "Controls on Arctic Sea Ice from First-Year and Multiyear Ice Survivability".

"Given the strong thickness–growth feedback of sea ice (Bitz and Roe 2004), where in a warming climate we can expect the thicker MY ice to thin at a greater rate than the thinner FY ice, and the fact that the ratio of MY to FY ice entering into the MY ice category each year is decreasing, it is likely that the difference between FY and MY ice survival ratios will decrease in a warming climate. If this occurs, the Arctic sea ice system would move toward a regime of decreased memory and decreased sensitivity to climate forcing..."

The interpretation that we have a new mode of Arctic sea-ice dominated by thermodynamic ice growth is confirmed by digging into the distribution of ice volume by thickness band. In the graph below I have broken volume down by three thickness bands, so for example, all the grid boxes with an effective grid box thickness of between 0 and 1m thick is shown in the small dark blue band at the bottom of the plot. 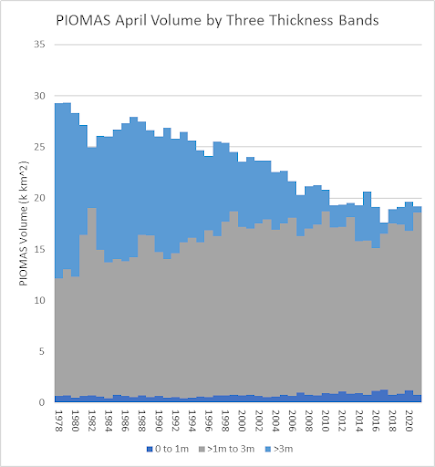 What can be seen is that the pre-2010 volume decline was due to the loss of thicker ice, the ice around 2m thick played no role in the decline and in fact increased to 'take up' some of the 'space' freed up by the loss of thicker ice. However now we are at a new steady state.
The memory in the system was provided by the thicker ice and with this largely gone the rapid growth of the thermodynamically produced ice is able to swamp the climate forcings. I have previously shown this to be the case under a wide range of atmospheric warming.
Looking at the source data for that, again using Arctic Ocean volume, I present the full series of April volume from 1978 to 2021 with a 20cm thickness banding. 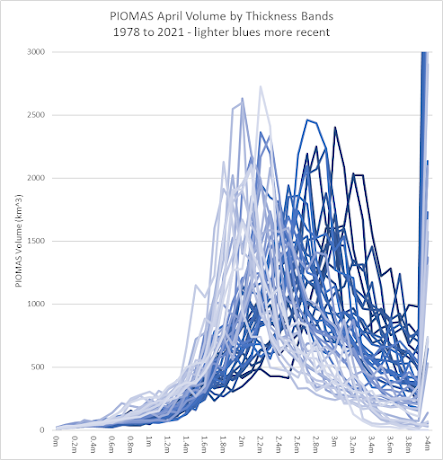 Here the darker the line is the older, and we can see the old ice-pack in dark blue, with the more recent ice pack thickness distribution shown is whiter, lighter blue.

These are two highly distinct systems within the Arctic Ocean's ice pack, the older having more thick mechanically deformed ice, while now the ice confirms to a sharp peak of thickness around 2m thick. And what governs the growth of that ice is winter cold.

I'm not going looking, but I'm fairly sure what is left of the denialists will be claiming that the sea ice doomers were wrong. Well the doomers were, there was no rapid crash, the extrapolation of curves turned out to lack detail, detail that was apparent from as early as 2004 when Bitz and Roe published "A Mechanism for the High Rate of Sea Ice Thinning in the Arctic Ocean." But anyone viewing this as meaning there is no cause for concern is an idiot.

The Arctic has transitioned with the ocean covered by a new type of ice pack, open water formation is worryingly high, especially as the open water will be warming seas right over the East Siberian Shelf with its seabed store of methane. The massive open water formation efficiency now produces a situation where massive energy is stored in the ice/ocean reservoir only to be released into the autumn (I've not checked on that yet but it will be).

In essence, the volume loss from the thicker older ice has dropped the Arctic sea ice into a new stable 'potential well' and to get back where it was is a steeper climb of action and effort than it took to get here.