June seems to represent a crucial period of pre-conditioning for the summer melt season, with large June sea ice losses in years of large summer losses, such as 2007, 2011 and 2012. The purpose of this blog post is to consider what is happening in June this year, and the prospects for the rest of June and the summer.

This year a June cliff has started, here I show it in terms of area calculated by Wipneus, and summed by me to make the Arctic Ocean area. The anomaly is the difference from the average seasonal cycle, worked out as the daily average area from 1981 to 2010. 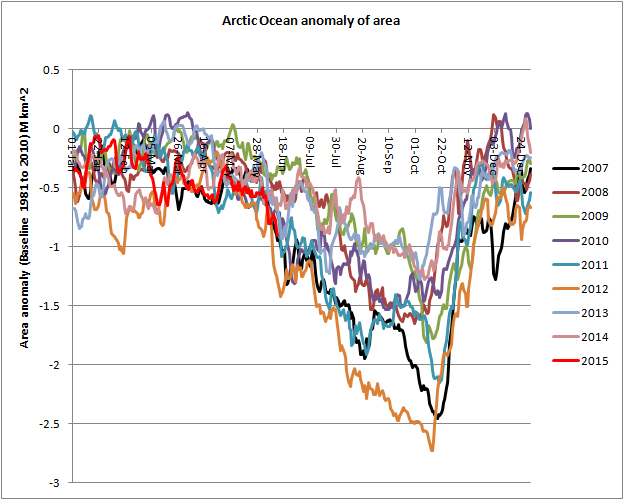 The June drop in anomaly started on 30 May this year, and continues to date. A smaller drop is seen in extent data. 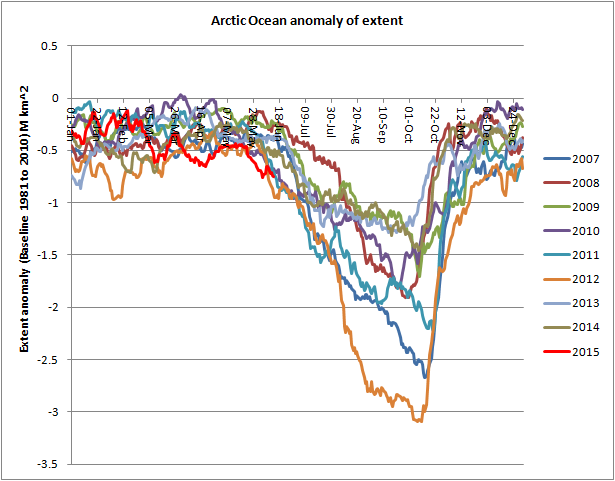 The decline in extent has not been so severe as in 2012, so as of 13 June 2015 (the latest data) no region or of the Arctic is at record low extent. In the following graphic the black lines show the range of extents for the 13 June from 1979 to 2015, the red triangles show the extent in June, all calculated as an anomaly from the 1981 to 2010 baseline period. 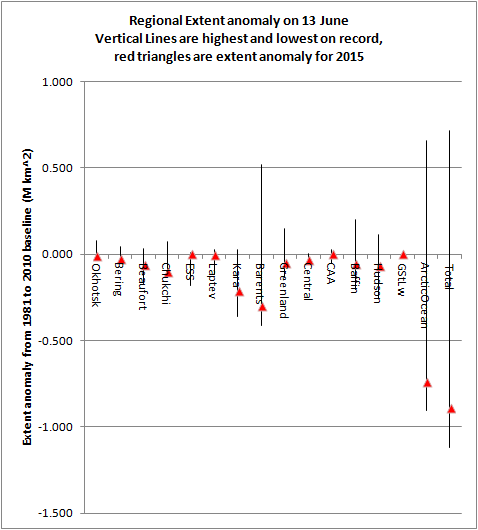 That extent and area are dropping at the same time means that compactness anomaly is roughly level, which means that the summer drop in compactness is average. Compactness is the ratio Area / Extent and can be considered an indicator of the amount of open water within the region covered by extent of sea ice. Such open water is critical in June, the period of maximum insolation. 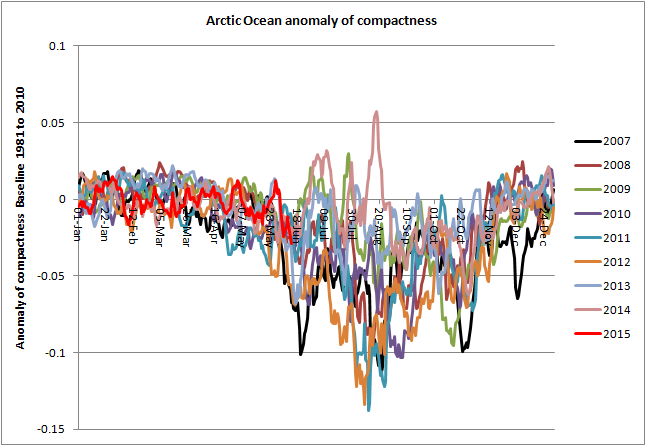 Looking at the peripheral seas of the Arctic Ocean Basin (Beaufort round to Laptev) compactness also remains stubbornly average. 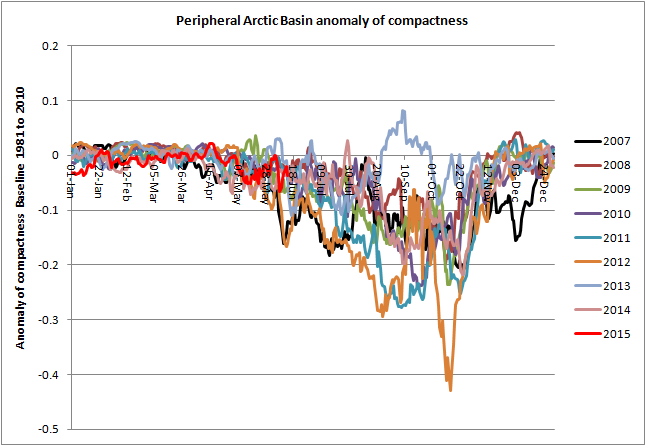 The answer, I think, lies in the weather. Here are early June sea level pressure anomaly plots for the record low years of 2007, 2011 and 2012 (2011 didn't set a record but it was the first year after 2007 to match that record low considering all sea ice area and extent datasets). Note that these were plotted when I first sat down to write this post some days ago.

The two significant common factors of all these years were:


So far in the first half of June 2015 these features have been absent.

However in 2011 and 2012 (and in most post 2007 years) a feature common to the summer is present through early June, and this is present this year. That feature is a high pressure over Greenland which can be expected to drive winds southward through Fram Strait helping with ice export out of the Arctic Ocean. As an aside, there is a direct connection between anomalous high pressure over Greenland and melt from the Greenland ice sheet

The lack of a dipole in early June off Siberia can be expected to have contributed to the average extent in the East Siberian and Laptev Seas, but it does not account for Chukchi being so low. Chukchi extent has been low earlier in May and June, but the situation has been exacerbated by a storm around 7 June 2015. The US Navy's HYCOM Cice model shows the impact of this storm. 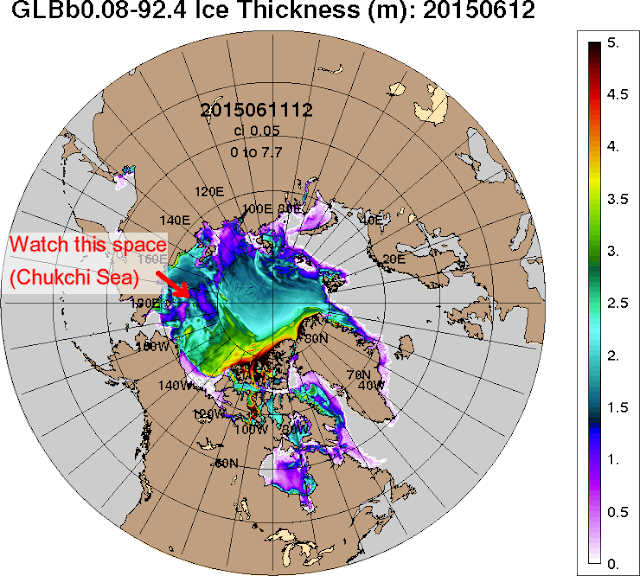 While last year's 'watch this space' story was the Laptev Sea, this year it is a band from Chukchi to Laptev, where low concentration dispersed ice should allow the ice/ocean albedo feedback to open up a lot of water here, possibly before the fast ice off Siberia is melted out. That would be quite a neat configuration to see.

An early contender for the 'watch this space' title of summer 2015 was the Beaufort Sea. Wind had opened a polnya off Banks Island and then ice/ocean albedo feedback worked on the opportunity presented. However I cautioned in my May summary post that this might slow as the ice edge encountered the multi-year ice. This has happened with extent loss in Beaufort slowing to an average rate of loss for 1981 to 2010. 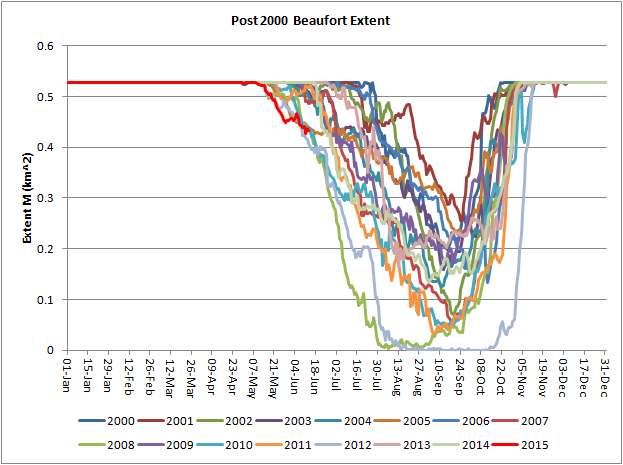 HYCOM suggests considerable damage to the multi year ice in Beaufort, if correct this implies that the rate of loss of extent is likely to increase over the rest of the summer, as is to be expected from the typical post 2000 behaviour seen above.

My SIPN prediction this year is 5.15 million kmsq +/- 0.64 million kmsq. So far I see little to make me think September 2015 extent will be substantially below that range. Schroeder et al have already announced their June prediction, which at 5.1 million kmsq +/- 0.5 million kmsq is largely congruent with my prediction. The lack of strong loss of compactness when years like 2007, and 2012 showed compactness declining more than average suggests to me that Schroeder et al are on the right track, and that my prediction not including data after April, and being biassed high by volume in the Central Arctic, will not be substantially to its detriment. Conditions at present make me think that around the lower range of my prediction 4.46 to 5.1 million kmsq is most likely, making the coming September likely to be an average post 2007 year.
Posted by Chris Reynolds at 12:29