Just a quick post with some graphs, because things are looking better in the Arctic Ocean for a more exciting melt season than the last two years. All of these graphs use anomalies from the 1981 to 2010 average.


A proper analysis will follow in early July, for now here is a snapshot of a rather exciting development.

Extent for the Arctic Ocean shows a fall in anomalies, loss being greater than average. 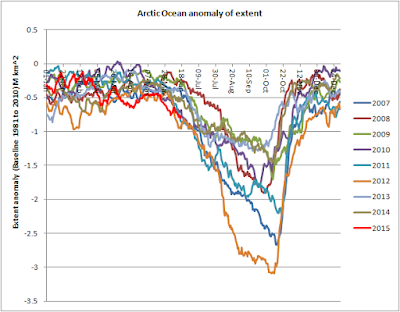 While for the whole Arctic anomalies remain level, loss is around average. 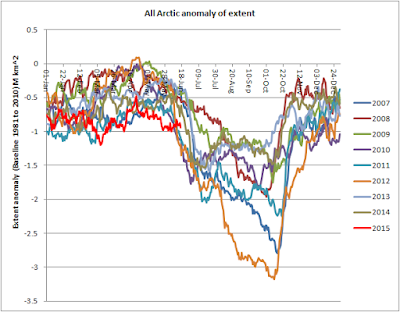 But area has just crashed through June, and crashed substantially. 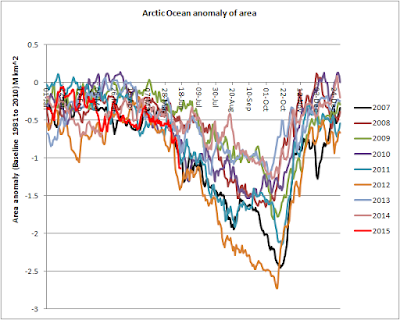 This has led to compactness (area divided by extent) dropping substantially, which is good for those of us who enjoy exciting summers of ice loss. Lower compactness implies more dispersed ice and a greater absorption of sunlight, preconditioning the pack for losses later in the summer. 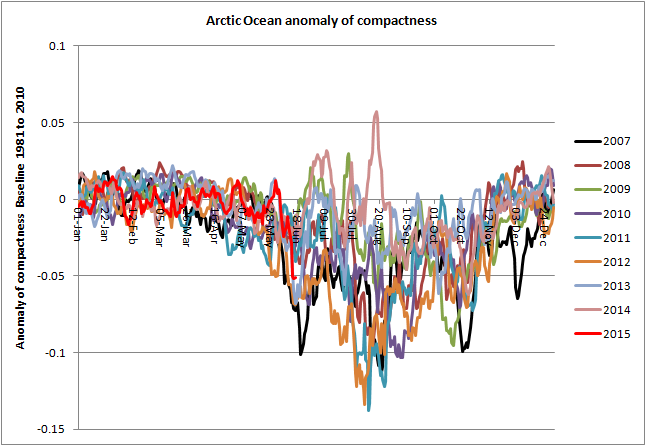 I've recently suggested that average compactness from 10 to 30 June may predict large loss summers. This drop in compactness doesn't suggest that is likely, we're only 7 days into that period and even 2013 saw a large drop of compactness at this time. Before we get to the end of June there is the indicator of CT Area (Cryosphere Today Area).

CT Area losses for late summer are very amenable to prediction, my prediction will be made shortly after 23 June. But for now here is the current state of anomalies for CT Area. 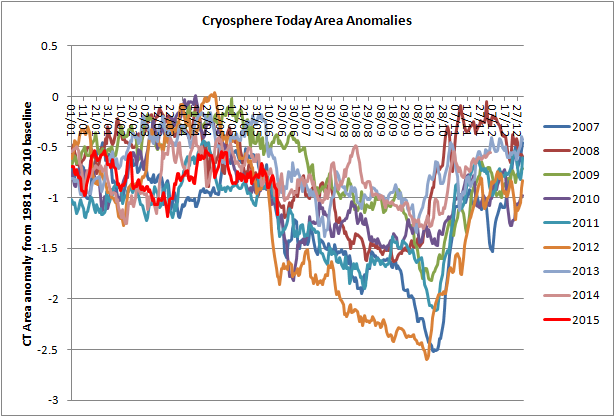 In terms of CT Area one can imagine a straight line from the area anomaly at 23 June to the minimum as the central value of the prediction, this is because of the lack of trend of late summer losses in that index (slope is 0.0006M km^2/year). Then the bounds can be applied, bounds of 0.37M km^2 above and below the central value makes hindcasts 80% successful. There is a week until 23 June, which means substantial losses of CT Area at far more than an average rate must occur to make a large crash this year feasible.

I don't think we'll see a large crash this year, I am certainly not throwing away my SIPN prediction, but I do think there is a better chance of an exciting year than we have seen over the last two summers.
Posted by Chris Reynolds at 11:58

I like the analysis, but just to double-check, have you corrected for the 2-day lag in CT dates compared to the origin of the data, or is that not relevant for your purpose? Did you see on the ASIF where it was being explained that CT area dates are those the data becomes available, not those the data originates?

No such adjustment has been made, I am aware of the CT Area delay, that and the treatment of grid box areas (constant grid box area IIRC) are the reasons I dropped CT Area some time ago. But for some reason it is amenable to prediction as described previously, so I'll use it for that.

Doesn't affect what I'm saying here. The 300k drop predicted by Wipneus is included in the CT Area data above.

It's just good to finally see some exciting activity that might mean an exciting year. I'm hoping for a minimum at the bottom end of my June SIPN prediction.