This will be a rather short post, I will have much more to say about the June PIOMAS data. But for now, partly due to work, here's some late comments on PIOMAS May data.


When I wrote my previous post May temperature data wasn't fully available from NCEP/NCAR, now it is. 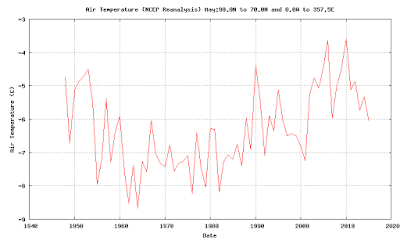 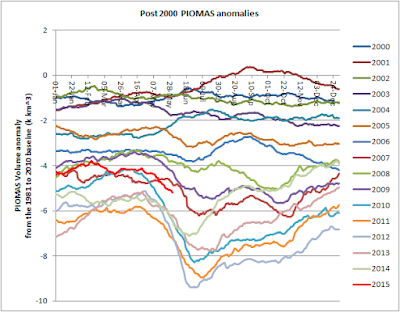 The Spring volume loss anomaly has been discussed previously. The above plot shows the difference from the average seasonal cycle for 1981 to 2010, the years 2010 to 2014 all show the drop of anomalies of volume from early May to around the solstice, although 2014 was a mild drop. So far, even with a cold May there has been a drop in volume greater than the average during May. I will post more about this when the June PIOMAS data is in.

The PIOMAS grid box effective thickness is seen in the following map plot. 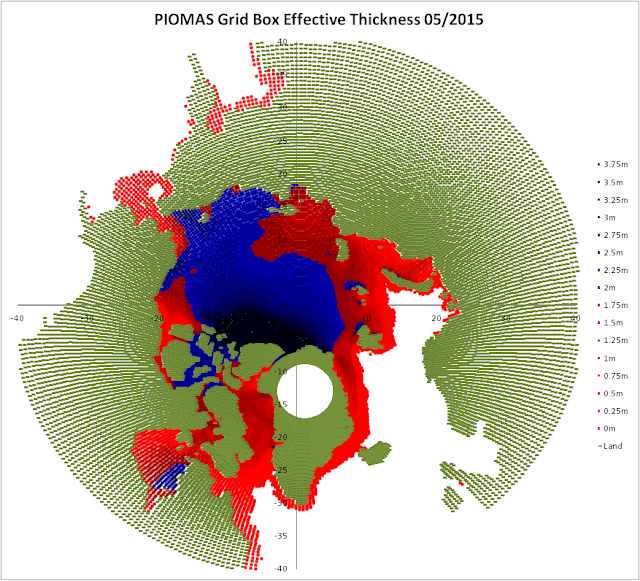 The somewhat thicker ice towards Siberia may be indicative of the winter export of thick ice from the Central Arctic, but it also largely falls under the region of cool temperatures over May and that may account for some April to May thickening. 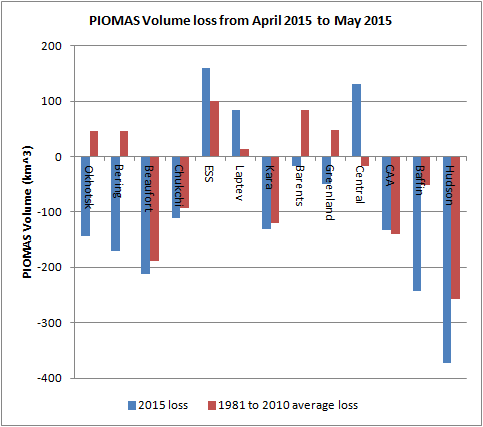 The gain in volume in the East Siberian Sea and Laptev sea is greater than normal, much greater in the case of Laptev. While on average the Central Arctic would show a small loss between April and May, this year it has shown a gain. I suspect that the cold May is playing a key role here, as these regions are under the band of May cold see in May's data.

Turning once again to differences I have plotted the regional differences from May 2013, after the 2012 record, but before the last two summers of poor melt weather. Yet again the Central Arctic holds the increased volume, while the bulk of the Arctic Ocean has lower volume than at the same time in 2013. 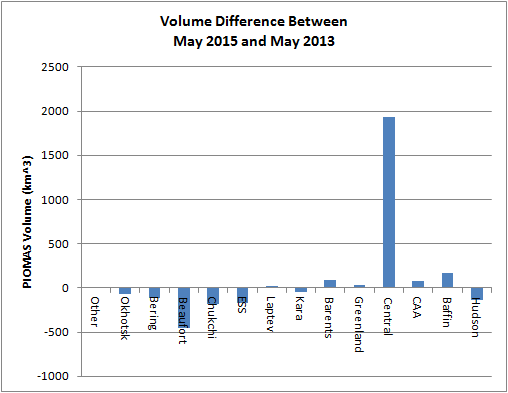 By the end of June we will know how large the drop in area and extent has been over June, how low the drop in compactness will have gone in June, and how low the PIOMAS Spring volume anomaly will go.
Posted by Chris Reynolds at 09:32

Could there be a delay effect with the anomalous May cold ie slower rate of melt in June?

I don't think so. May cold might have led to an ice gain off Siberia (assuming it's not advection into those regions). But good melt weather in June should be able to wipe that out.

But I've not done a proper correlation analysis.

I still think the current drop in compactness in Laptev may have a bigger impact than events in May, as it happens before the solstice under peak insolation.

On the other hand Beaufort losses seem to have levelled. HYCOM showed the melt edge hitting the thicker ice exported from the Central Arctic, this does seem to have paused losses in Beaufort.

It might be worth doing a post on such recent events in the next day or two.

One of the items that I think gets missed by just looking at historical numbers and that could be captured in a GCM is that at some point temperatures rise enough to turn precipitation from snow into rain.

Historically almost all of the precipitation that falls in the arctic is snow - but that is changing. In the forum someone mentioned that the Laptev is getting hit my rain. If temperatures don't return to freezing quickly that will have a significant effect on melt; especially as opposed to a few inches of snow - which would likely *delay* melt.

Looking at past data simply can't account for this change. It's one of the reasons I still haven't been persuaded that there is a long tail vis a vis when we reach an ice-free state.

Let's just do this over here, rather than get bits in public and bits by email.

Here's what I replied to you by email....

My issue is that unless we see the April peak volume collapse then issues like rain increasing summer loss will cause drops in September volume, but those drops will not compound year on year. And what the PIOMAS -1m experiment shows is that even with June starting with a pack 1m thinner than in recent years there is still a persistent remnant of ice off the CAA in September. The reason for this is the same process seen in PIOMAS anomalies of volume, the spring melt increases while the late summer melt decreases So I struggle to see how a rapid crash can occur.

These feedbacks, summer rain, early land warming through sow melt, increased area of FYI and increased melt ponding, reduced snow cover on ice, and others: They do not seem to me to address how one drops September extent to below 1M by 2020. They are reason to doubt survival of significant summer ice into the 2050s.

I still think that there is a fundamental and important message from Wagner & Eisenman, and that whilst they allow persistence of ice too long the general 'gompertz' like form of GCMs is what will happen.

I think in recent posts you've been making the distinction between Central Arctic and The Rest. The final bar chart in your post suggests that a greater proportion of ice is in the central arctic than the rest of the arctic this year. I was wondering what you thought this fact might have on this years melt progress?

My thinking is iF we go back to the 2nd fig in your post it looks like those year where we had less MYI in the centralarctic (and therefore a greater proportion of ice in the rest of the arctic) then we've seen those huge volume drops thru June ( years like 2012, 2011, 2010). Years where we've seen a bit of a recovery in central arctic MYI then the precipitous drops have got a little smaller (2013 and 2014). You might expect that this year ( barring a weather intervention) that this process might continue and we'll see a smaller cliff falloff thru June this year. I guess the prediction might be that the rapid falloff period is going to be shorter this year something along the lines of 2007???

I'll go into this in more detail when the PIOMAS data is out in July. But for now I'm watching to see what happens with the area and extent in June.

A lot of people are getting very excited at the moment. What I'm seeing are very mixed indications for the coming melt season. I may blog over the next few days.

Great to see this post found really understanding about global warming, I get another blog related to Record Heat and Global Warming News which have almost every news links for global warming.