This is filler post before we get the PIOMAS data. Wipneus has calculated regional breakdowns of NSIDC extent based on their gridded data, something I started doing but couldn't work out the correct ocean masking to use. Anyway that issue has been solved, Wipneus has been doing the number crunching and has let me have the data.


June extent loss anomaly within the Arctic Ocean is broken down in the following graphic. The anomaly is the difference between the average loss (baseline period 1980 to 1999) and the actual loss for June in the year shown. 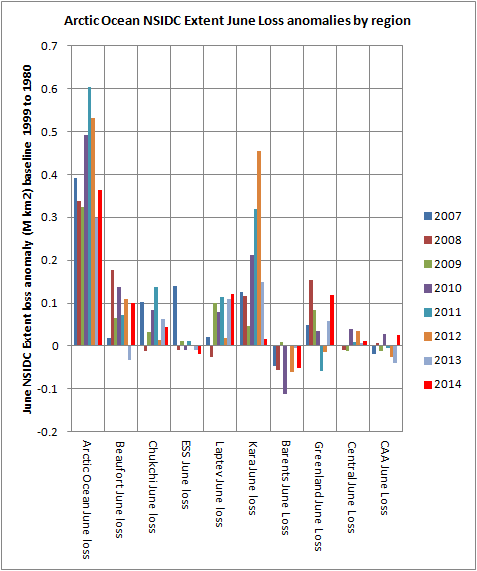 In contrast to the extent situation June Area losses are well below average, with the largest single anomaly being a below average area loss anomaly of -158k km^2 for the Central Arctic region, in this region June average loss for 1980 to 1999 is 220k km^2. 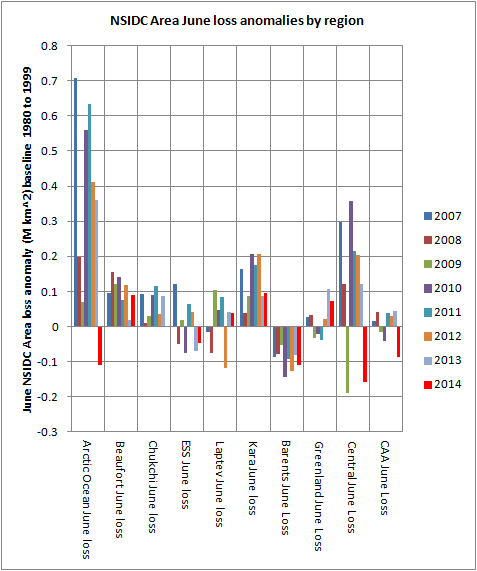 This conflict between extent and area implies a compaction of the pack, with area losses not leading to a decrease of compactness. Compactness is defined as the ratio between area and extent (=area/extent) and is used to give a measure of how compact the sea ice is, the closer to '1' the more compact (less dispersed) the sea ice is.

Compactness anomaly during the last 7 days (29 June to 5 July 2014) shows that the above average compactness this year is unusual in the context of recent years. 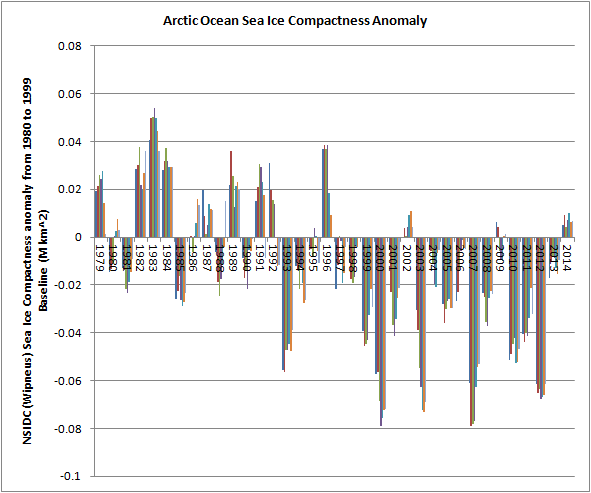 So what does this mean for the coming melt season?

Plotting a scatter plot between early summer compactness (7 day average centred on 1 July), and extent at the minimum shows a very scattered result, a linear fit only has an R2 of 0.44. Rather than leave it at that I have plotted new minimum records and the difference between the new record and the previous record low extent or area (red plots) in tandem with the early summer compactness 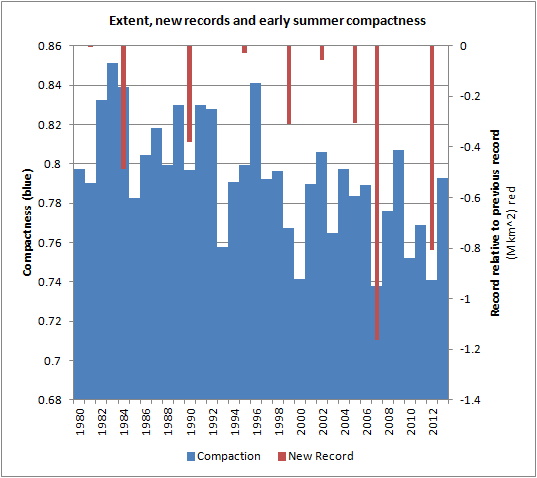 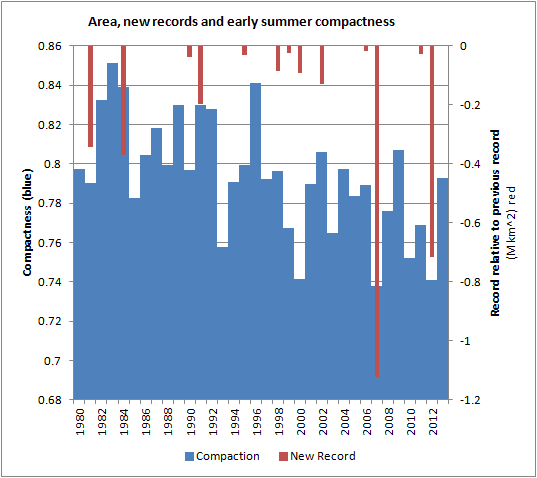 In both cases the relationship between new records and compactness looks mixed. However in terms of both area and extent the recent massive new records of 2007 and 2012 appear to be associated with low early summer compactness. This is reasonable as lower compactness will allow greater melt within the pack due to more open water and lower overall albedo, preconditioning the pack for massive drops below previous records. This is only two years, but it strengthens my opinion that a large drop below 2012 is not going to happen in 2014. However I do not take from the above graphs the idea that reaching 2007's extent this year is impossible. 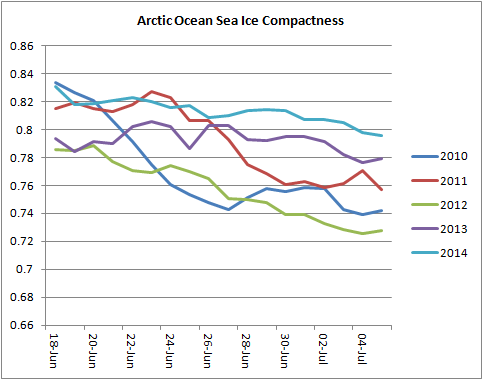 Compactness remains high, but it is falling convincingly now. A strong decline during the rest of the melt season is still possible, given the right weather. However the late start to the melt and lack of preconditioning may make nearing the 2012 record unlikely, if the weather changes it may be unlikely to reach 2007 or 2011. A lot depends on thickness at the end of June, and PIOMAS data for June should be out this week.

I have plotted June and July extent losses for the Arctic Ocean below. June losses are still historically high, although not as high as the 2010 to 2012. But there is still a substantial amount of loss to be had in July. 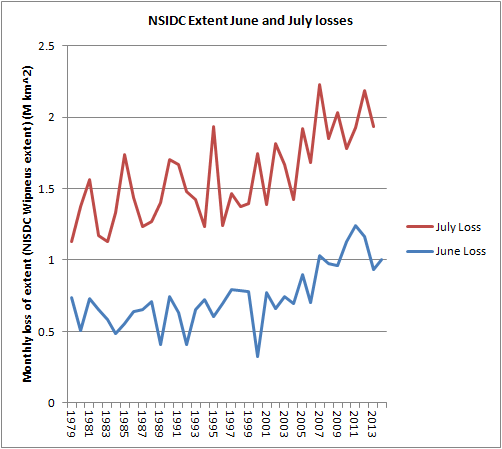 Looking at the relationship between June and July extent losses within the Arctic Ocean shows a weak linear relationship (R2 only 0.3). 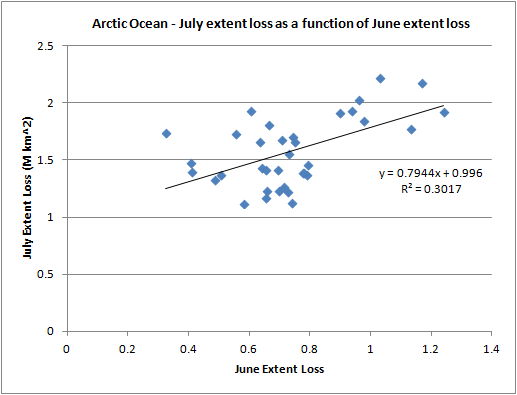 Applying the errors in July loss from the linear fit to the known June loss of extent in the Arctic Ocean, with maximum and minimum error giving the range, gives a range of July losses between 1.3 and 2.3M km^2. This loss would include 2007 to 2011, and 2013, at 31 July 2014, but would not include 2012. However, referring back to the above scatter plot, the trend line leaves most recent years (top right) above the trend, so it may be more reasonable to concentrate on the lower half of the distribution. In that case the post 2007 years excluded are 2008 and 2012. But 2013 stalled in August due to very unusual weather, is that likely a second year in a row?

At present both ECMWF and GFS forecast strong high pressure this week, which should mean strong losses of area and extent. However by next weekend they diverge, GFS retains a strong Beaufort High, ECMWF switches to dominant low pressure. If ECMWF is correct the we could see 2014 drop further behind 2007, 2011 and 2012.

There remains a great deal of uncertainty for the 2014 minimum.
Posted by Chris Reynolds at 02:27

Listing the regions in descending order of average area of ice at minimum could help evaluate what is happening. If I recall correctly; Central, ESS, CAA and Greenland are the top four. All the others are less.

This year, three of those (Central, CAA, ESS) have more MYI, late melt pond onset, and greater compactness with low June losses, relative to recent year trends. Overall retention of the MYI throughout the Winter and Spring has been very good. They look much more like 2006 or 2009, than 2007 or 2012.

None of the available data would suggest a new record loss.

Thickness in 2014 is at least 25cm above that in 2009. Using thickness calculated from gridded PIOMAS data May 2014 was 40cm thinner in Beaufort, 90cm thinner in Chukchi, and 50cm thinner in the ESS as compared with 2012.

However looking at ASCAT over the winter, and considering the low levels of MYI after 2010, 2013 was but one year and one year does not allow as much deformation and mechincal thickening as five or more, I do not think this is likely to be as severe an impediment to melt as the 2010 export proved to be. This is a change to my opinion earlier this winter.

So I agree that a new record is very unlikely. But I do not agree that the evidence argues against a place for 2014 in the top 5 lowest September extents.

The regions are ordered clockwise from Beaufort within the Arctic Ocean to help preserve a sense of the spatial pattern.

An R2 of 0.44 is pretty respectable considering everything else that can affect the minimum. What's your take on how much of the cause/effect is explained by melt pond formation (as effects area measurement)?

I can't say what the overall roles are. You are right about the other factors, and in that view 0.44 R2 isn't too bad. It just led me to try a different approach that would favour finding a role for compactness and record losses.