Crucial to what I think will happen later this season is the PIOMAS data, as I wait for that the NCEP/NCAR data is now updated, and of course we have extent and area data. So here's the situation over June.


Starting with NSIDC Extent (product G02135), I have calculated the daily differences in extent (current day minus previous), these are shown below. 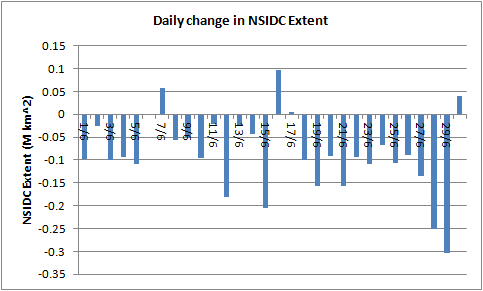 After that graph the losses for 1 July and 2 July are 261k kmsq and 77k kmsq, so the uptick on 30 June 2014 does not represent the end of that period of loss. However there is clearly a shift in losses after 18 June 2014. This is due to a shift in the atmosphere to strong high pressure over the Arctic Ocean.

Conditions before 18 June are marked by a strong low pressure tendency over the Arctic Ocean (data NCEP/NCAR reanalysis).

Then from 18 June the situation shifts to a strong high pressure tendency over the Arctic Ocean, this continues out over the North Atlantic, giving the UK dominant high pressure, and the downwards-right extension seen in the plot below shows that part of the pattern has been a frequently strong Beaufort High.

Indeed this shift to high pressure has been enough to ensure that average June sea level pressure (SLP) north of 70degN has been at the high end of the distribution of June SLP for years 1948 to 2014. 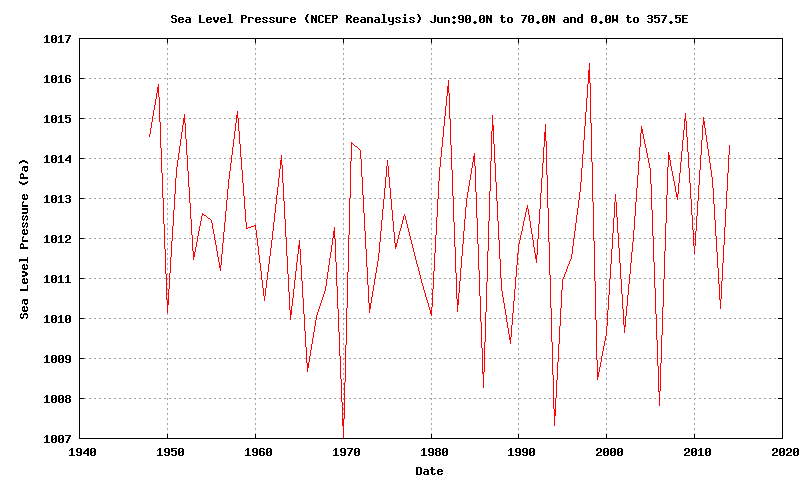 This shift in pressure has been accompanied by a shift in temperature. Prior to 18 June, temperatures were cold over much of the Arctic Ocean. The following NCEP/NCAR reanalysis plots are in Kelvin, for reference; 0degC is roughly 273 Kelvin.

During the first part of June average temperature was below zero.

After 18 June temperatures rose such that virtually all of the sea ice has surface air temperatures above zero.

Part of the reason for this will have been clear skies and more sunlight reaching the surface. However over the ice this should produce limited warming above zero, any warming above zero degC is limited by ice, the additional 'theoretical warming' above zero goes into melting ice (termed latent heat).

The following two images show air movement at the 850mb level (typically about 1400m height in June). Before 18 June circulation kept air within the Arctic Ocean (rings of arrows), what strong movement there was (yellow/green vertical band to the northern tip of Greenland) took air from over the ice and drove it over the ice, keeping things cool.

However after 18 June there is strong movement of air from Alaska over the ocean, as the air flows around the high over Beaufort this circulates to the Canadian Arctic Archipelago. The early June pattern of air largely circulating within the Arctic Ocean has been broken and the dipole formed by low pressure over Siberia and High pressure over the Arctic Ocean has, as in recent years, drawn in warmer air from outside the Arctic.

However, in terms of recent years, the June average temperature north of 70degN (again at 850mb) has still been kept low when compared to recent years. Timeseries from NCEP/NCAR reanalysis. 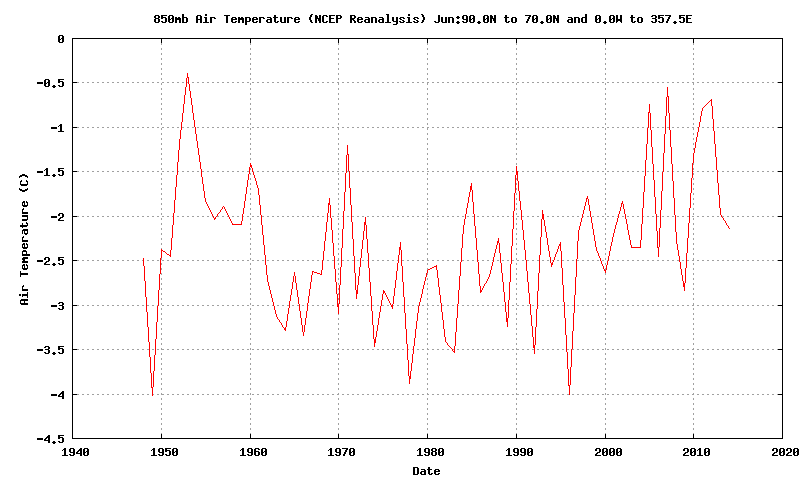 Using surface temperatures north of 80degN gives a timeseries comparable to DMI Arctic Temperatures, a product commonly used in the Arctic sea ice amateur community. This shows that on average June 2014 was comparable to June 2013, and was at the cold end of the temperature distribution for recent years. 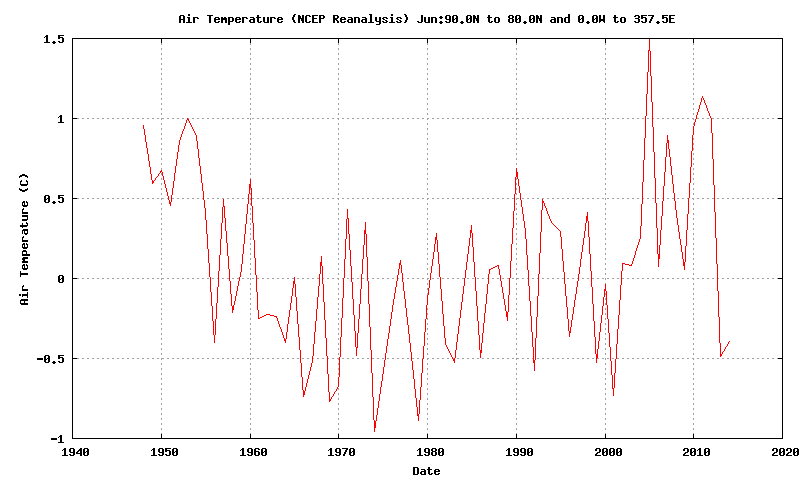 As usual I present extent and area in terms of anomalies from the 1980 to 1999 baseline average.

Cryosphere Today Area (CT Area) has seen large 'June Cliffs' in anomaly, this is suspected to be due to sensitivity to melt pond spread during June, and melt ponds are suspected as playing a role in large loss years (especially 2007 and 2012) by preconditioning the ice for large melt later in the season. Melt ponds are darker than bare ice so they increase the amount of sunlight absorbed by the ice.

This year there has been no June cliff in CT Area anomalies. If melt pond preconditioning is such a strong factor then this suggests a muted melt in the rest of 2014. It is worth pointing out that 2014 has seen flatter anomalies through June than 2013, flat anomalies indicate area losses of around the long term average. June CT Area losses have only been slightly more than average. 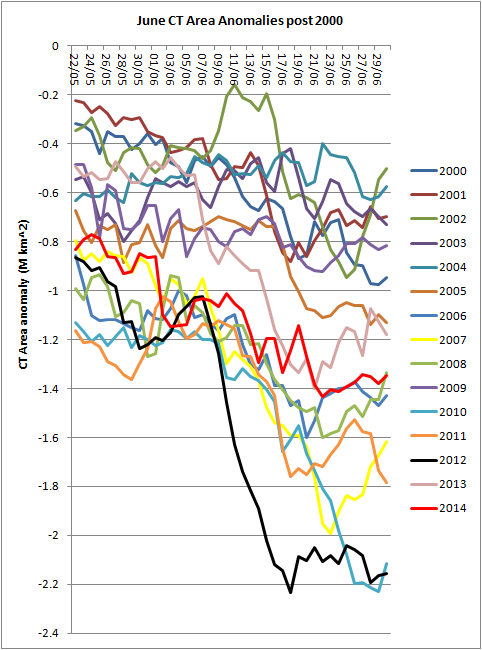 However June saw a rapid drop in NSIDC Extent anomalies after 18 June, losses of extent were far greater than the baseline average. 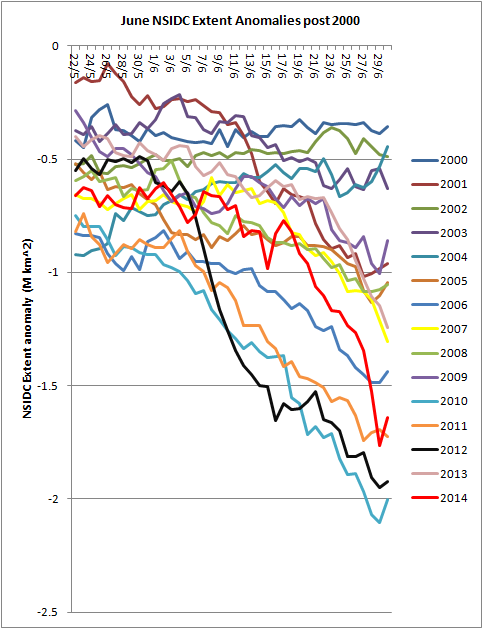 Due to problems with ocean masks in NSIDC Extent I've been unable to produce a regional dataset of extent and area from NSIDC gridded data. Wipneus and Michael Yorke have got closer, but a difference between the main numbers for NSIDC Extent and the extent calculated from the gridded product is still there. If it's anything like the problem I was having, it increases in summer - which is precisely the time of year of greatest interest. So without a good dataset of regional extent and area I'm now going to turn to MASIE and Wipneus's own (Homebrew) calculation of area and extent (on which there is a thread at the Sea Ice Forum).

MASIE extent shows how about half of the extent loss from 18 June to 30 June is from the Arctic Ocean, with the remaining half being almost equally from Hudson and Baffin. 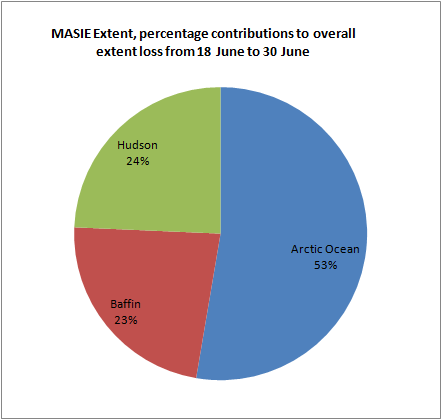 Switching to Wipneus's 'Homebrew' calculation of sea ice extent, data here, the picture is broadly the same. However here only 2/5 of the extent loss from 18 June to 30 June is from the Arctic Ocean, with Hudson producing almost 2/5 and the final 1/5 being from Baffin. 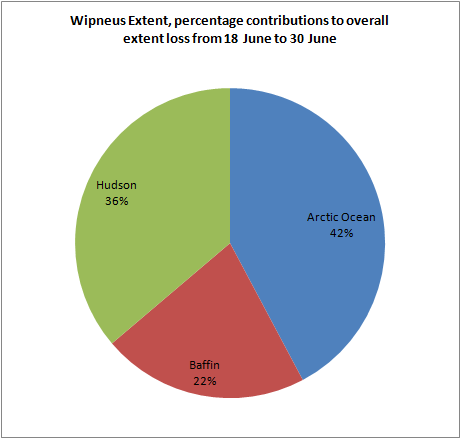 Breaking down the Arctic Ocean losses, the pattern is quite well spread, although there are surprises, for example extent losses from the East Siberian Sea (ESS) are negligible. CAA is the Canadian Arctic Archipelago, regions can be seen on Cryosphere Today. 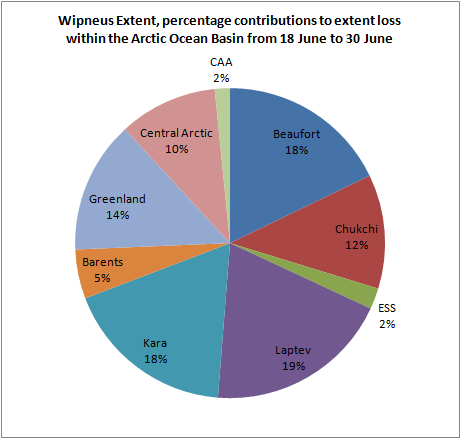 The differences between the Wipneus data and MASIE is due to different definitions of regions, MASIE has it's own region set up, Wipneus has used the Cryosphere Today regions for the same reason I did in my PIOMAs derived data, it's most commonly used in the amateur sea ice community.

To understand why Extent has been dropping faster than Area I take the information above and, using the Wipneus extent and area data, look the difference between area and extent. The following table shows area and extent declines between 18 June and 30 June 2014, together with the ratio of area and extent for the three regions concerned, Arctic Ocean, Baffin Bay and Hudson Bay.


Compactness is the ratio of area and extent, in the summer compactness declines within the Arctic Ocean as area falls faster than extent due to the sea ice separating into dispersed floes, the ratio between area and extent change in late June can be considered similar to compactness. The same summer process has been happening in Baffin and Hudson, being at more southerly latitudes. However in the Arctic Ocean itself, as is to be expected for the time of year, this process has not yet started, so the ratio of area and extent late June losses has not yet declined. This year, because so much of the loss of extent is from outside the Arctic Ocean the 'summer behaviour' of Baffin and Hudson is able to dominate with extent falling much faster than area, allowing CT Area to fall at average rates while we see above average losses in NSIDC Extent.

Differences between MASIE and the Wipneus data aside, the qualitative message is clear, that a large part of the recent losses are due to Baffin Bay and Hudson Bay (as already pointed out by Wipneus from his data). This may be taken to imply that once Hudson and Baffin are clear of ice there will be no further potential for large losses. However, historically, June overall isn't a time for large extent losses within the Arctic Ocean, July tends to see the real start of retreat in that region, so it is possible that as Hudson and Baffin slacken off the Arctic Ocean will take over. Lacking a long term regional extent series I can't back this up with numbers.

What will be critical is the thinning that has taken place over June, I can't offer an opinion because I don't have an analogous year for this year since 2010, and it is since the 2010 volume loss that anomalous large spring melts have been happening. However in my May PIOMAS post I noted that the spring volume loss had already started in 2014, and in the last two NSIDC Sea Ice News posts reference has been made to the Marginal Ice Zone Project in the Beaufort Sea. All three clusters of the Marginal Ice Zone Project show thinning over June, so the idea that melt totally stopped in June is not supported in Beaufort at least. As to whether volume loss has been greater than average, we will have to await June PIOMAS data.

That noted, June thinning will play a large role in the rest of the season, thinner ice needs less thinning to reveal open water and cause extent or area to drop. In respect of this it is worth noting that for the ESS May 2012 average thickness was 2.28m, May 2013 average thickness was 2.31m, but May 2014 thickness was 1.76m; about 50cm thinner than either 2012 or 2013. The picture is similar over Chukchi and Beaufort.

June 2014 started off late and has been characterised by a massive shift in the atmosphere, with a resultant massive shift in the ice state. As seen from a plot of 2014 relative to the other post 2007 years, 2014 is now the fourth lowest year on 30 June, when it had been seventh lowest on 1 June. Note that in the plot below 2014 is always the zero extent difference level, which isn't plotted, all other years are plotted as the difference from 2014. 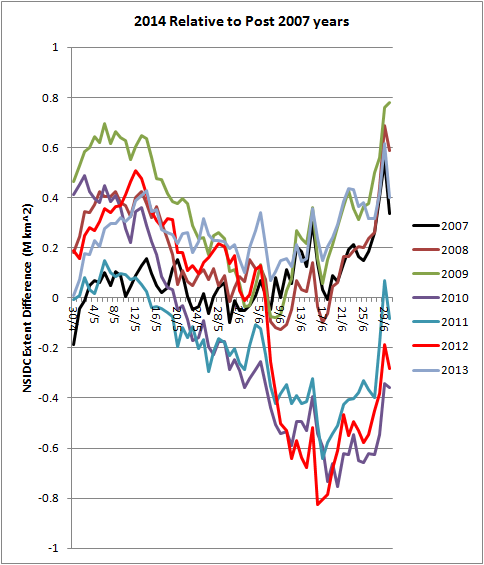 Whether 2014 will hold that position is due to a mix of weather and June thickness, but this is turning into a far more exciting sea ice season than I had expected in mid June.
Posted by Chris Reynolds at 10:48

Impressively thorough working of the numbers as usual, Chris. It sounds as though the main opposing forces for the remainder of the melt season will be early thinning - continuing the longer-term trend you have observed in other posts - vs. the high compactness (relative to recent years) of ice in the Arctic Ocean. The latter seems to be related to low melt pond formation. Weighing that factor fairly heavily, my guess is that the extent anomaly trace will trend up (again, relative to recent years) within a week or so if the current warm spell abates.

I read recently a quote from a scientist about how despite weather that wasn't notably good for melt 2012 crashed out. I put that down to the low winter thickness (volume) for recent years, combined with the aggressive thinning seen in Spring 2012. A lot of the outcome of this year depends on how aggressive the spring melt has been, but I think that determines whether we're in the 2011 ballpark or the 2012 ballpark. However if the current high pressure dominance continues through June we could be looking at a 2014 minimum of around 2012, likely a bit higher, but feasibly a bit lower.

Chris - off topic question: Were you the 'Chris' that delved into Monckton's various scientific references on RealClimate and found they never supported the point he was making? This was back in 2006 after his two-part essay ran in the Sunday Telegraph.

I'm unsure because I can't remember. It was around that time that I was in the process of ditching my scepticism about AGW, and even when I was a sceptic Monckton's transparent, idiotic, crap always irritated me.

So it's possible, it reads like my style, but I don't remember it. It was nearly 8 years ago!