I've had this blog post written but on hold for some months, I never seemed to have the mind to publish, but I've just stumbled upon someone claiming 'no global warming for 18 years', and it's moved me to post.

1. Anyone who says there has been no warming since 1998 is either;

a) unacquainted with the data or
b) cannot read graphs.

The hiatus started from around 2003. 1998 was an outlier followed by a continuation of warming.
e.g. NASA GISS, the blue lines being hand drawn. 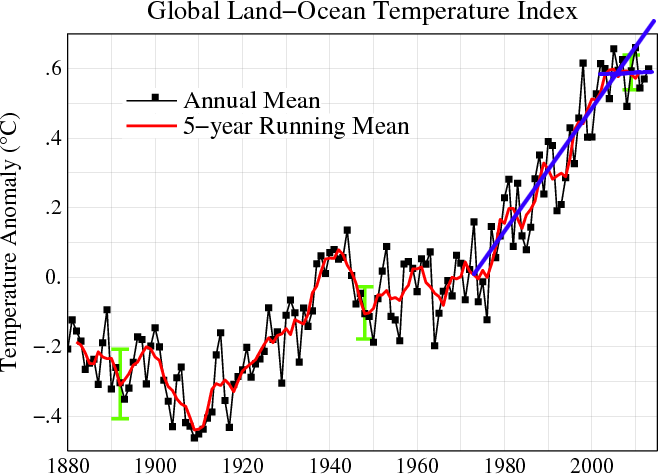 So that's 11 years of the hiatus, not 16, how anyone comes to the figure 18 I don't know and frankly, didn't care enough to ask.

2. The other associated canard that can be dispensed with ease is the insinuation that we don't know what's caused the hiatus in global warming. There is a pretty strong framework of explanation centring on 1) The ENSO, 2) Sulphate aerosols from vulcanism or human emissions, 3) Low solar activity, 4) a boreal winter contribution as a result of sea ice loss.

There is a further point: The hiatus in global warming (GW) is tied to the measures of surface and atmospheric warming, as Trenberth & Fasullo point out, this is too narrow a definition of GW. When one takes a wider view it is hard to argue that the energy imbalance causing GW has ceased. However as most of us who have been following this issue for years are used to using datasets such as the NASA GISS Land Ocean Temperature Index as a measure of GW I'm prepared to go easy on this point, in my opinion there is a hiatus, albeit one in the surface temperature and atmospheric datasets commonly used for global average temperature.


Those two issues (and the third detail) aside. There is a fundamental and very revealing issue with the hiatus meme as asserted by the more dim witted climate change denialists, and insinuated by the more intelligent ones. Consider the following two examples.

1) It's been a cold winter, in March things start to warm up, then in the second week of April a cold snap hits. Snow showers roll in from the north and the UK experiences daily maximum temperatures just above zero, very cold for April in the UK. So the denialist concludes that summer is over and starts posting on his blog that we'd all better get ready for a prolonged winter, through June, July and August!

2) At a party someone runs a nylon comb through their hair and amazes the denialist by picking up bits of tissue paper with the comb. Inspired by this, the denialist concludes that gravity is a liberal conspiracy, a great lie devised by so-called scientists, he blogs on this (it's normally a 'he'), hammering home the point that the scientific consensus on gravity is a socialist inspired fraud.

Yes there are people stupid enough to draw such idiotic conclusions, but they really are in the minority, the average climate change denialist would not make these mistakes. They would see an externally driven warming due to the sun's angle in the sky increasing and hours of daylight increasing, driving a general warming from winter to summer. When this is interrupted by anomalous weather they wouldn't conclude that winter is starting, they would accept that blips happen in the transition from the cold of winter to the warm of summer. Likewise, in the second example, they would understand that just because another factor is able to overcome the force of gravity, this does not mean that the gravity is disproved.

So the denialist can seem like a reasonably intelligent person in most situations. Like many people they may simply be using past experience to make up for a lack of understanding, no fault in that, show me a human that doesn't employ this technique at times! Yet when we take the denialist into the realm of their weird mental hang-up they ignore the comprehension or experience they would apply in those two mundane situations, blinded by a desire to attack the idea of human driven global warming, they fall into a trap that would make them seem foolish in those more mundane situations.

This stupid meme that the hiatus in global warming means warming won't start again once the factors driving the hiatus abate (as they will), or that the hiatus somehow disproves the settled science that increased atmospheric CO2 traps infra red radiation and warms the planet, is really just a waste of everybody's time.
Posted by Chris Reynolds at 11:59

just a waste of everybody's time

... and the idiocy has finally spurred me to do something about it on the web ...

all above is true...
There is an other nice option to show stupidity:
- plot the temperatures of 30 years before the "pause" (1968 - 1997).
- draw a linear trend line and extend this trend line to the year 2013
- decide where you expect the dots for the years 1998 - 2013 assuming global warming has stopped, and where you expect these dots if warming has continued.
- now plot the recent years.

You know I'm not convinced the majority will do anything substantive about AGW, but I'm still aware that on this issue time is more precious than money.

I'm intrigued to see how that will develop. Bookmark taken.

Deciding what would constitute an end to warming is interesting. I don't conclude summer has ended in August when temperatures level out. Temperatures falling are more persuasive. With regards AGW, temperatures are not falling, the very best natural variability can do is cause a levelling.

I've been asked by denialists in the past what amount of levelling or falling of temperature would persuade me that CO2 doesn't cause global warming. The last time I replied with a question: What number of balloons would a person need to rub on their jumper and stick to a wall to persuade me that gravity is wrong?

I have been reading about this subject for a few years, and I noticed the absence of surface warming was becoming a political hot potato.

I think there's a different issue which does merit attention: the Argo era ocean energy uptake seems to equate to about 0.5 watts per squared meter.

Since I'm just a retired engineer I may be missing a beat, but it sure seems to me this figure doesn't fit with the overall feedback family summarized by the IPCC in their latest report. What gives?

I don't really follow politics anymore, so I wouldn't know about 'hot potatoes'.

I don't know what you mean about 'feedback family', do you mean the radiative forcings figure from the latest IPCC report? IPCC AR5, figure SPM5 shows a net radiative balance of +2.29W/m^2 in 2011. But that is with reference to a 1750 baseline. The graphic shows a change of +1W/m^2 between 1980 and 2011, however the bounds are so large it is not possible to confirm or rule out any supposed energy imbalance show by Argo.

Mr Reynolds, the global warming politics are intense here in Europe. We face huge tax loads and pay high electricity bills, all of this designed to discourage consumption of energy and subsidize renewables. Now they are debating much higher taxes and more subsidies, which of course tend to destroy industry, and this means we import more Chinese goods manufactured burning coal. So the EU policy is meaningless in the great scheme of things. We export the ability to burn coal, pat ourselves on the back, and the politicians give speeches about their grandiose accomplishments. These guys seem to forget Europe isn't a planet, and that we share the same atmosphere.

Geoff Beacon writes: "I can't get a clear idea of what dana1981 was saying. Do you?"

Geoff, what comment from Dana Nuccitelli are you referring to and where? The SkepticalScience article you linked to was written by Kevin Cowtan and I didn't see any comments by Dana in the comment section.

Thanks, I wasn't aware of that particular page. However it merely outlines why I said we have a "pretty strong framework of explanation" rather than saying it was explained.

We have a framework, not a total explanation. There is certainly no room for peddling the "we don't know what is happening" crap the denialists come up with all the time. We may not have the details but we have a selection of factors that can together lead us to expect an attenuation of warming.

So that page doesn't affect this post or my opinion.

1998 was a particularly warm year, and 1999 was a cool one. Together, the two anomalies roughly cancel each other out. So drawing a graph beginning at the start of 1997 or 1998, or midway through either year defensible, because it incorporates both the warm and cold anomolies, but drawing a graph at the beginning of 1999 is cherry-picking, because it incorporates the cool year into the "starting end" of the graph but excludes the warm one, thereby creating an appearance of exaggerated warming.

I like to say there's been "no warming since the Clinton/Gore Administration." It happens to be true, it's easily remembered, since U.S. Presidential Administrations last 4 or 8 years it gives a appropriate "feel" for the kinds of time periods over which it is reasonable to average such data, and, as a nice bonus, it lends itself to wisecracks about Bill Clinton's & Al Gore's hot air. :-)

Here's a WoodForTrees plot of GISS, HadCRUT3, HadCRUT4 & RSS since the waning days of the Clinton Administration (January, 2001).

As you can see, only GISS shows any warming since the Clinton Administration (which lends itself to wisecracks about James Hansen's & Gavin Schmidt's hot air).

It's a stretch to call it an eighteen year pause, though. To defend the claim of an 18 year pause/hiatus, one would have to use a phrase like "no statistically significant warming," or be talking about satellite data, or else do things like undo the "adjustments" to the temperature records in places like the USA and Australia which have increased the reported warming. Here's a graph for 18 years of temperatures; as you can see, only the RSS lower troposphere satellite data shows no warming.

But a 17 year pause, or awfully close to it, is a good description of the temperatures graphed from HadCRUT3 or satellite data.

Don't cherry pick small regions of data, use a long >30 year period. Then calculate the trend, and see how things work out. The levelling didn't start in 1998. 1998 was an +ve outlier in all datasets, breaking a trend of warming before and after it.

I very nearly deleted your comment under my 'denialist deletion' policy. This is not a political blog, it is scientific. Mention Gore etc once more and I will delete without warning. I'll let you link to Goddard only because it amuses me that you defer to such a numpty and does not serve your argument well at all.

Chris reynolds,
you apparently did not do the plotting I proposed. If you had done, you would have seen no pause at all. The last 15 years, nearly all temperatures are ABOVE the extended trend line. I was not attacking you, but supporting you.


People making trend lines trough a limited amount of years (even 20 years) should realize that the beginning of their trend line should be connected to the end of a trend line of the previous period. Their can'n be a jump in the " average" temperature just because you start a new calculation period.

Sorry if I was abrupt. I didn't think you were attacking me.

I hadn't done the exact calculation you suggested, I'm with Tamino on the inflection to a linear warming having happened since the mid 1970s. But I can well appreciate that the more modest slope of 1968 to 1999 would produce the effect you describe.

That said, I still see a levelling, but while it is interesting, I don't like the way it is being spun.