As discussed previously, on 18 June 2014 the weather shifted, the early June delayed start to the melt season came to an end and the melt season started in earnest. Now data is available for 18 July 2014, so I'm giving a brief summary of the sea ice situation one month on.


Notes: The region I describe as the Arctic Ocean is Beaufort, round to Barents, Greenland Sea, Central Arctic, and the Canadian Arctic Archipelago (CAA). Greenland Sea and the CAA are arguably not the Arctic Ocean, however ice state here contributes to the minimum, which is why I include them as Arctic Ocean. All extent and area are from the Wipneus data set derived from NSIDC gridded sea ice concentration data.

I'm not going into detail with regards the weather, however sea level pressure for 18 June to 17 July shows that the average over the Arctic Ocean remains high.

NCEP/NCAR timeseries can only be plotted on a regional basis, unless one processes the source data and I've not got round to that.

Temperatures continue to be low, with some areas showing temperatures below the 1981 to 2010 average. Due to the central nature of the high pressure shown above, a dipole between the west and east Arctic does not appear to be strong this year. Air seems to be circulating over the Arctic Ocean and remains cold. 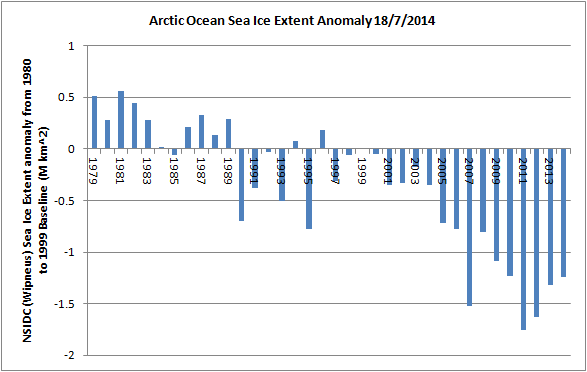 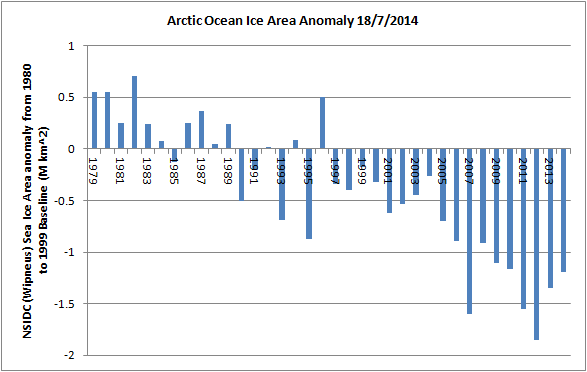 As with last year, despite differences in weather continuing to evolve, the impact of sea ice changes since 2007 seems to remain strong.

Both extent and area are very low in the long term context within the Arctic Ocean, which takes me on to compactness, which is defined as the ratio Area/Extent. What has marked recent weeks is positive compactness, area has not been falling as one would expect for the extent falls seen this year. However compactness has now gone negative.

First the anomalies of compactness (baseline 1980 to 1999), with each year in the graph below showing compactness anomalies from 1 July to 18 July. 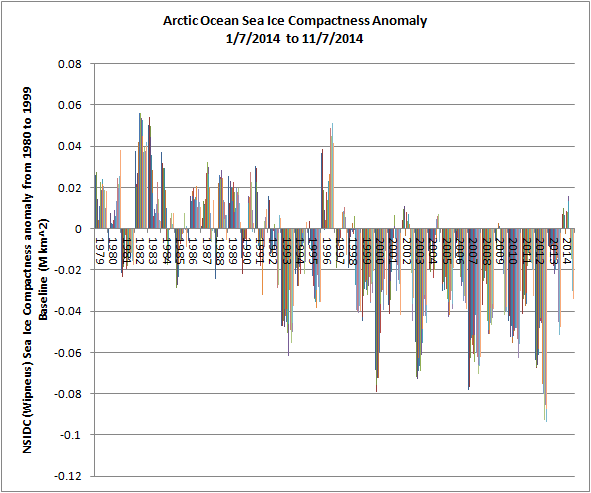 Having been positive for 2014, unlike the generally negative compactness anomalies of recent years, compactness went negative in recent days.

Looking at a timeseries of compactness anomalies shows that compactness fell below average for the first sustained period since 29 July 2014. The trend seems to be strongly downward, in other words compactness is reducing at a greater rate than the 1980 to 1999 average. 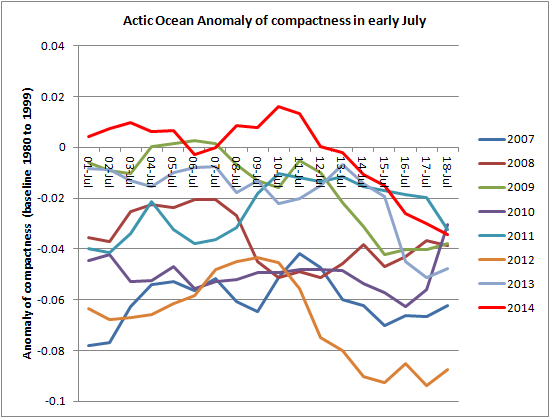 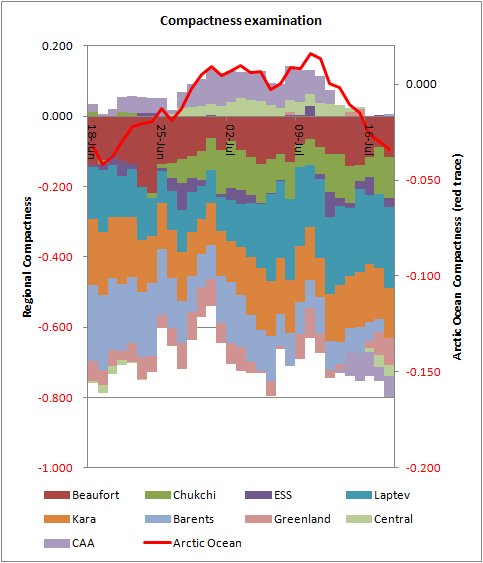 Presented like this it becomes clear that the failure of loss of area, which has led to Arctic Ocean compactness being above average is almost totally due to the Central Arctic and Canadian Arctic Archipelago. The ESS is only marginally below average, but the rest of the peripheral seas of the Arctic have below average compactness. Why is this? I'm considering that, but haven't come up with anything firm as yet.

However now the Central Arctic and CAA have started to join in anomalous large drops in compactness, I suspect that the usual July thinning has been happening. In my Mid July Status post I showed the progression of PIOMAS grid box effective thickness profiles for the Central Arctic in 2013, 2013 was chosen as it was a recent year of poor melt, the Central Arctic chosen because it largely survived that season's melt in terms of extent. 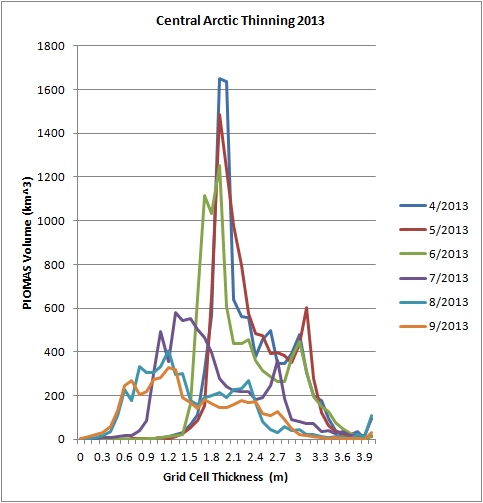 Following each month's thickness distribution it can be seen that while April to June show a large peak at around 2m, this has collapsed by July and the distribution has spread out towards the low end thickness, a process that continues through the remainder of the summer. This is caused by preconditioned ice of various thicknesses thinning to various degrees through June, spreading the distribution downwards and removing the monomodal peak around 2m. The fall of compactness shown in the Central region suggests to me that this process of precession to a thinner distribution and area reducing faster than extent is underway. However as the PIOMAS anomalies show in the late summer rebound from the spring melt, the resultant volume loss tends to be no larger in recent years than it has been in the past. Thus I would not draw the conclusion that the fall in compactness presages record losses, I remain confident that 2014 is not going to be a record year.

Going back to the idea that we're a month after the melt season properly started, I've made an animated gif of University of Bremen charts. This shows 18 June, 2 July and 18 July.

The loss of extent in the East Siberian Sea (ESS) is about average as seen in the anomaly of extent for that region. 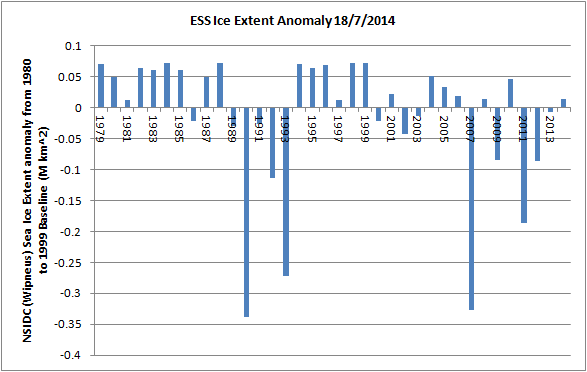 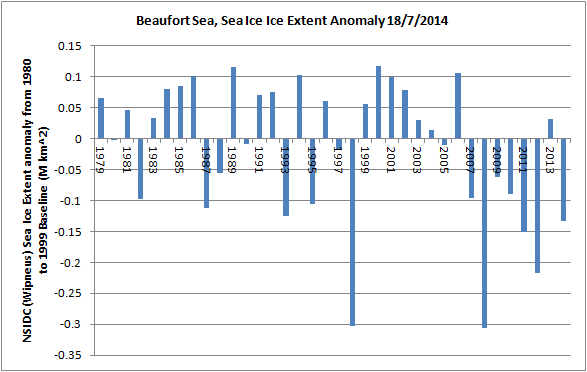 So the expanse of ice from Beaufort to the ESS (upper left quarter) isn't so unusual it demands that the export of multi-year ice into that region over winter 2013/14 be invoked as an explanation. But if it persists, then later in the season it may be seen to be a strong factor.

Meanwhile towards the Atlantic, while Barents is near empty of ice, Kara is only approaching halfway to the usual residual of summer ice, and has more extent of ice than any other post 2007 year. However as can be appreciated from the above animated gif (upper centre) the Laptev Sea polnya has grown into a large tract of water, which continues to expand, but does not appear to be warming as much as open water in 2007 or 2012, DMI. Extent in Laptev continues to be very low and is currently the lowest since 1979. 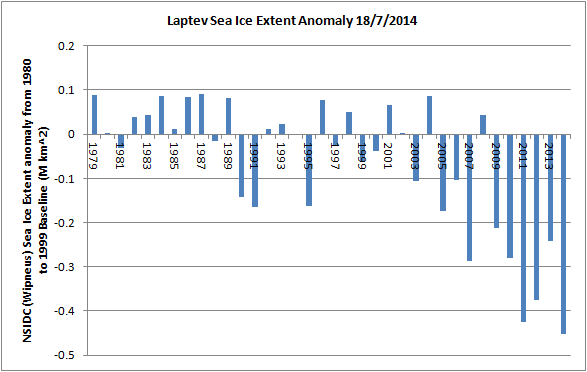 The current state of the ice and atmosphere does not suggest to me that a re-run of 2013 is at all likely, no more than a re-run of 2012 is a realistic prospect.
Posted by Chris Reynolds at 11:45