Now in mid August the potential for 2013 catching up on 2007 or 2011 is remote in my opinion, so it's worth explaining why I think that as I've been quiet for a while. Damn, just seen that Neven has posted today along similar lines, well as this is written I'll post anyway.


I've decided to re-start using extent and may as well use NSIDC Extent as this is the main index used by the scientific literature I read, in the autumn I will be reworking my spreadsheet to include NSIDC Extent.

In my June Status post, posted early July, I made a prediction in terms of CT Area based on past behaviour of the data. This prediction is shown as +/-SD and Central, how these were worked out is explained in that post here, they are the bounds stated in the update to that post. 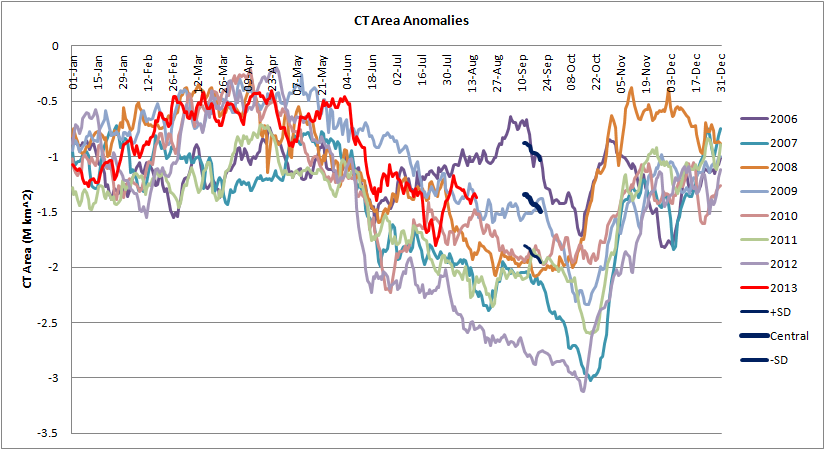 I had been expecting this prediction to fail on the low side, I now suspect I was wrong on that and that the losses from now on will be around the baseline average (1980 to 1999). It may seem that there's still a fair way to go and enough time for 2013 to beat 2011 or 2007, however I doubt this will happen.

Most recent years of NSIDC Extent anomalies show a levelling from this time until the minimum in around mid September, this implies losses around the baseline average. In CT Area 2007 and 2011 show an increase in anomalies towards the end of August, implying lower than average losses, 2012 shows the strongest downward trend (above average losses) but in that year there was much more open water earlier in the season implying a strong role for lateral melt in the late summer (implied by Zhang et al 2013 "The impact of an intense summer cyclone on 2012 Arctic sea ice retreat"). I expect losses from now on to be about average.

It is worth noting that the fall in anomalies after mid September seen in both the above graphs is due to anomalous open water after the minimum as the ocean loses heat before surface ice can form.

As discussed previously temperatures in June and July have been cooler than recently, NCEP/NCAR. 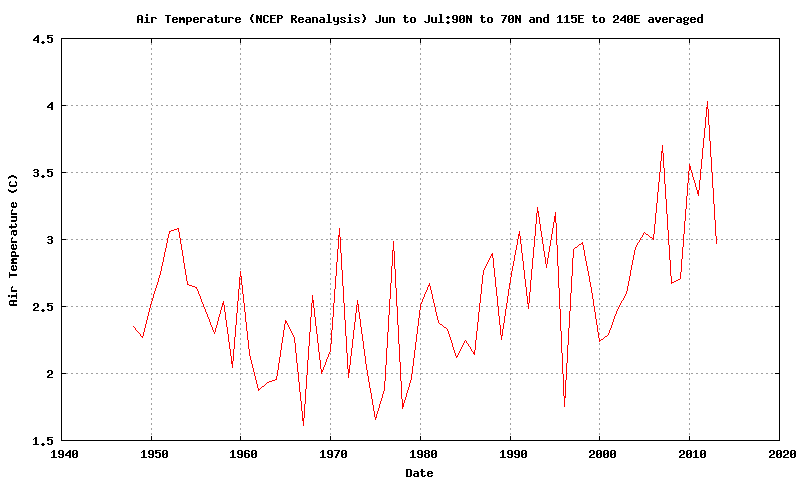 This has continued in August, NCEP/NCAR only has the facility for monthly/seasonal timeseries, but plots of the temperature for the first half of August show that 2013 was cooler over that period than 2012 for much of the sea ice pack.

DMI provide a plot of average temperature north of 80degN from ECWMF, link, this shows that 2013 has been cool, but also shows what appears to be a drop in temperature suggestive of an early start to the re-freeze. 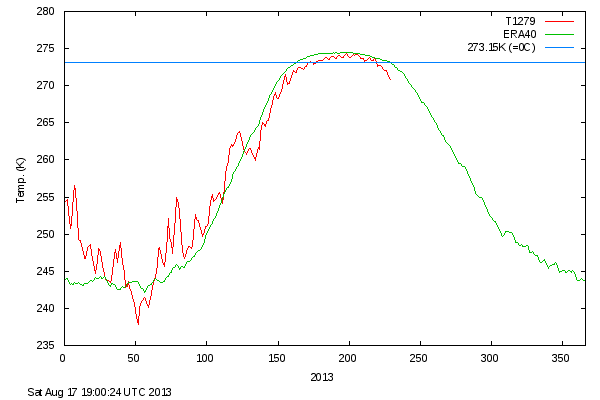 I doubt if temperatures will continue on the suggested steep downward trajectory, however GFS suggests a general cooling of the pack marked by an expansion of the 0degC isotherm, the grey line over the green in the Arctic Ocean. The following animated gif runs from 18 to 25 August and shows the 0degC isotherm expanding to cover almost the whole of the Arctic Ocean by the end of that period.

This suggests a modest further cooling to come. So whilst the true freeze season may not be starting over the whole of the ocean, the prognosis seems to be for a general cooling, but in any case the strongest period of the summer melt season is now over.

I've previously graphed the change of PIOMAS volume in ten day increments, the most recent period ends on 18 August, today's date, and is marked on the detail from that plot shown below. We don't have the data for August yet, but it can be appreciated that the variability in losses from year to year is generally a small fraction of the average losses in each ten day period. An exception to this is actually in early September, but here the trend is towards smaller volume losses, not larger. 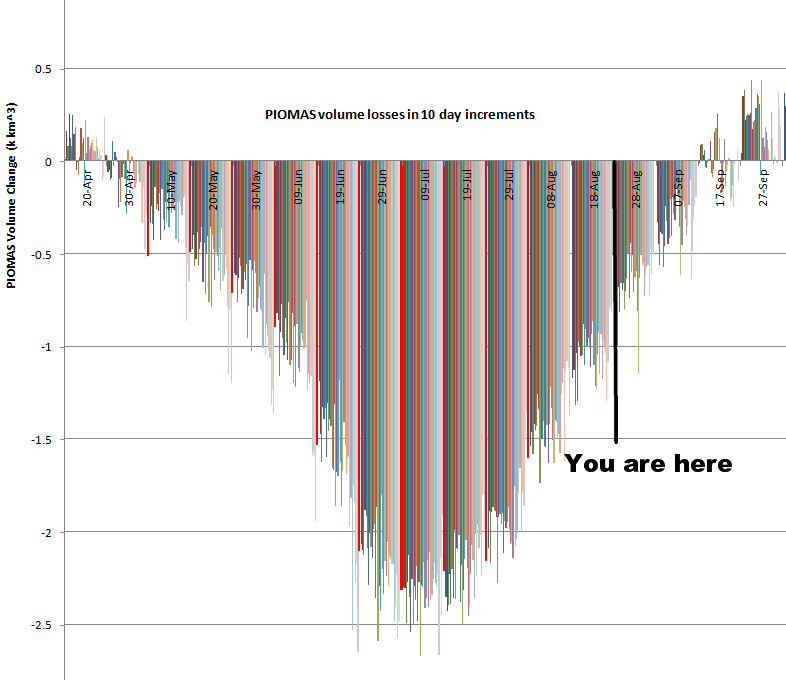 With thin dispersed ice, in theory it might not take a lot of volume decrease to expose more open water. But I seriously doubt if we're going to see a CT Area drop sufficient to meet 2007 or 2011, and expect melt from now on to be around the long term average.

For CT Area the date of minimum will be around mid September (average being 12 September), and the trend in date of minimum has a slope of -0.0376 and an R2 of 0.003. In other words there is a very slight trend of the date of minimum getting earlier (so slight it's fair to say there is no trend). The date of minimum is set by insolation, and approaching that minimum the rate of loss reduces, so if the sea ice is going to do something spectacular it has until about the end of this month, just under 2 weeks away.

The fat lady hasn't started singing yet, but she's on the stage and drawing breath.
Posted by Chris Reynolds at 11:37

if the sea ice is going to do something spectacular

I'm putting my money on the Hole.

But on balance my bet is nothing spectacular.