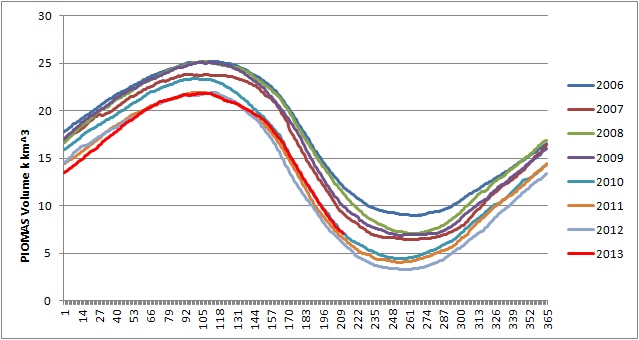 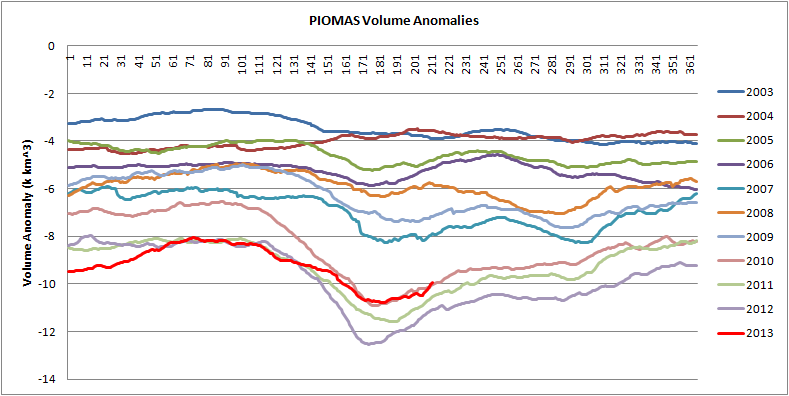 Taking the period from day 110 (20 April) to day 180 (19 June) as the typical period of the spring melt volume losses over this period are presented in the following graph. 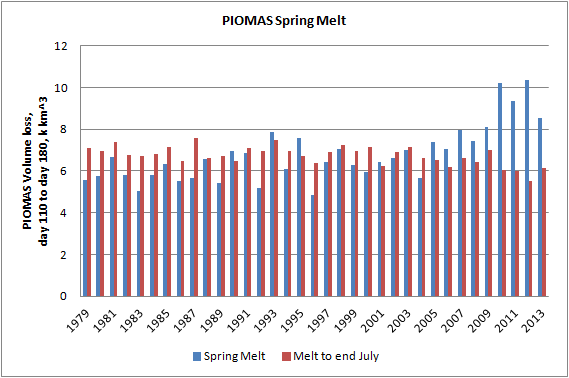 This shows that despite appearances of sea ice area or extent, 2013 still had a strong spring melt and aside from 2010 to 2012 was the strongest spring melt in the series. 2013 remains in the set of recent years.

The volume loss calculated using monthly average volumes shows that July losses were average, July not having a strong trend and being the month of greatest volume loss. 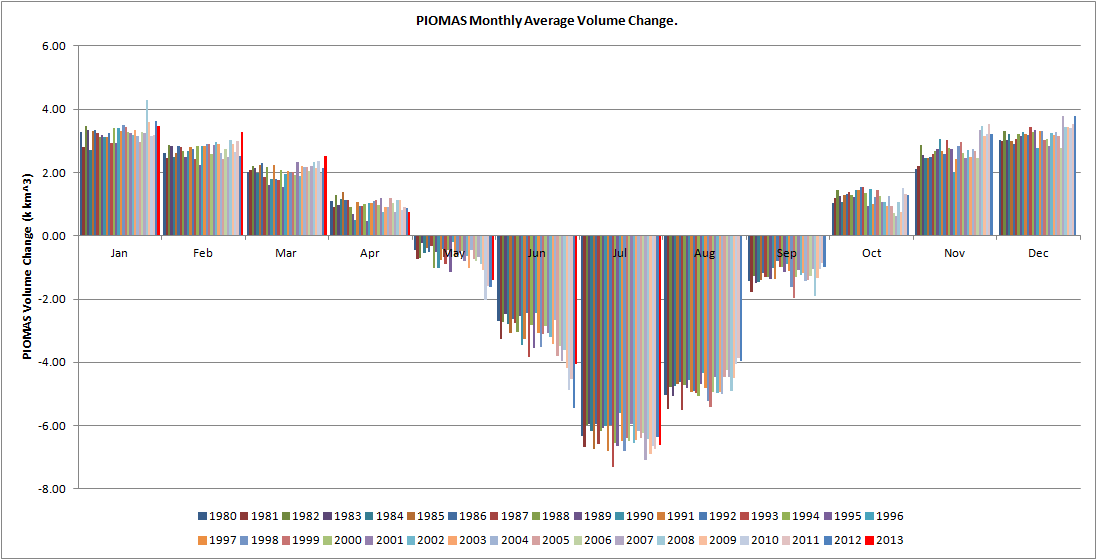 The same approach but using ten day increments, link, reveals that the loss over the ten day period leading up to 29 June volume losses were at record lows. Given this data I have changed my mind about the issue of dispersion and re-freeze in the recent hiatus in CT Area loss, I now think it is largely due to re-freeze and cessation/slowing of melt over much of the pack. Note that in the anomaly plot of PIOMAS volume, shown as the second graphic in this post, the uptick at the end of the series starts from 25 July 2013, the date that atmospheric conditions shifted to strongly anti-cyclonic and temperatures dropped.

That the current PIOMAS volume is at the same levels as 2010 does not however mean we're in a recovery of the ice,similarly that CT Area is now above all of the post 2007 years does not mean ice state is back to conditions before 2007.

The above graphic is from PIOMAS gridded data for March, the figures along the bottom row are thicknesses, and the graphic shows the volumes of ice at those thicknesses, e.g. for 2m that's 2 to 2.5m, and in 2000 the volume of grid cells reporting that thickness of ice was 1.978 k km^3. The exception being 3.5m which is 3.5m and thicker.

This data shows that in 2010 there was a volume loss event that lead to a large drop in grid boxes reporting ice over 3.5m thick. Ice of this thickness would take many years to regrow back to the sort of volumes reported in the early 2000s. The drop in 2006 would seem to hold hope of a rapid re-growth, however that was associated with an increase of ice thicknesses in the 2.5m to 3m range, in other words there was a dispersion that reduced the average thickness of grid boxes. Similarly in 2010 there was a drop of 3.5m thick ice caused by a dispersion leading to a peaking of volume in the 2.25 to 3m ranges. This was caused by reduced thickening over winter and a mass export into the Siberian sector, link, what followed in 2010 was that much of this ice melted out, so did not contribute to a recovery in 2011, and lead to a series of low volumes thereafter.

With volume levels currently at 2010 levels it may seem that we will see a winter recovery to volume levels similar to winter 2010. However the ice at present will regrow thermodynamically to the order of 2m thick, this limit is due to the ice insulating atmosphere from ocean and reducing heat flux more efficiently the thicker it grows over the available time in a freeze season. There will be some ridging leading to thicker ice, but the ridging needed to create volumes of ice over 3.5m before 2010 takes years. So to draw the conclusion that this winter will see volume and thickness levels typical before 2010 would not be sound.

There has been some questioning about these PIOMAS results and whether the model is now producing inaccurate results. I see no reason to doubt the picture painted for 2013. The muted spring melt has lead to a summer that is above the PIOMAS volume of the other post 2010 years, and a cool summer has compounded this, in my opinion there is no reason to resort to claiming the model is inaccurate. It is worth re-stating the uncertainty found by Schweiger et al 2011, +/-1.35k km^3 although in the abstract this is stated to refer to October, in section 6.3 this is applied to the September minimum. If we apply this uncertainty to the 31 July 2013 volume we get a range of 5.75 to 8.45k km^3 which makes it impossible to say whether volume is above or below the range of 31 July volumes for 2010 to 2012, add in the uncertainties to those years and the situation becomes even more uncertain. I will continue to use and assess PIOMAS data as an index, knowing it is not 'reality', but accepting it as a good proxy for sea ice volume. On that basis I accept the current PIOMAS estimate as showing that 2013 has not seen a further decline and do not see problems of internal consistency, or consistency with other indices this season.


The multi-page Excel spreadsheet has now been updated with the PIOMAS data, it is available here.
Posted by Chris Reynolds at 03:04

The recent post at ASIF on "Arctic sea ice albedo diminishing" led me to review your May post on "The CT Area June Crash" (referencing Rosel & Kaleschke on albedo w.r.t. melt ponding). Following your inference about melt pond fraction from CT area, particularly in the CAB, it looks like 2013 had considerably less ponding than 2012. Comparing to the PIOMAS volume anomaly, I see some correspondence - in both timing and depth - between CT-CAB and PIOMAS for 2012 vs. 2013. Do you find this to be the case in general? Any indication that melt pond fraction has as much influence on the seasonal low (not just the June anomaly) for volume as for area or extent?

I'd love to have a regional breakdown of CT Area to investigate what you say better.

I don't find any indication melt ponding has an effect on PIOMAS volume. The PIOMAS spring volume loss that has been a feature of post 2010 years (a year of volume loss rivalling 2007) starts much too early to be due to melt ponding. Indeed the June Cliff, which I take as indicating rapid spread of melt ponds, happens in the second week of June, while post 2010 the PIOMAS anomalies level out around the solstice 21 June, giving little time for melt pond impact on PIOMAS volume. After the solstice PIOMAS anomalies rise (less than average volume loss) then level (about average volume loss).

I'm not sure from the point of view of the PIOMAS model how much it would be affected by melt ponds in the real world - would they be modelled? But I have suspected a role for melt ponds in forming the annual minimum.

As a back of envelope calculation - If I take June losses to be indicative of the size of the June Cliff, and compare with the losses from June to the season minimum.

JtoMin is loss from 1June to min, the table is ordered by June loss.

It may be significant that aside from 2010 JtoMin ends up in descending order.