The full data for June are now available for Cryosphere Today Area (CT Area). As usual I'm still waiting for NCEP/NCAR reanalysis to produce July average, and as PIOMAS uses NCEP/NCAR data they don't publish their main series on the first of the month. So I'll start by going over CT Area, atmosphere and volume will follow in the next few days.


The seasonal cycle of CT Area shows that 2013 had been putting previous years behind it, until a levelling (virtual lack of loss) since 24 July. That's 8 days with virtually no loss. 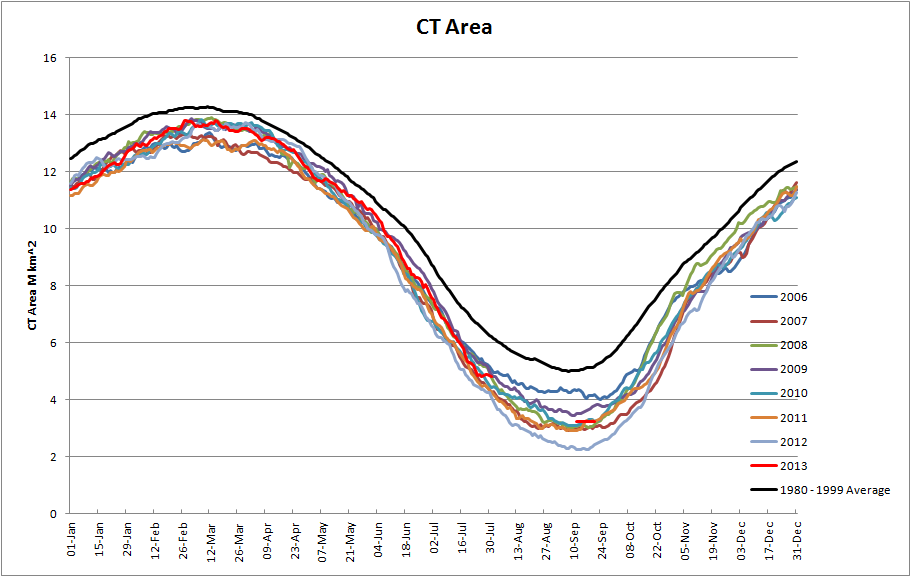 This plateau appears in the anomaly plot, the anomaly being the difference from the long term average seasonal cycle shown in the plot above as a black line, 1980 to 1999 daily average CT Area. It appears as an uptick which virtually wipes out the anomaly losses of the preceding July cliff. An increase in anomalies means that the baseline loss is greater than the current loss; evidently the case during the 8 day plateau. The July cliff is worth noting as these normally happen in early June due to the spread of melt ponds as temperatures reach zero. Due to the presence of ice, temperatures do not exceed zero by much, but the excess energy implied by this pegging of temperatures goes into melt. I have been unable to determine a clear cause for this cliff, which happened on 17 and 18 July. 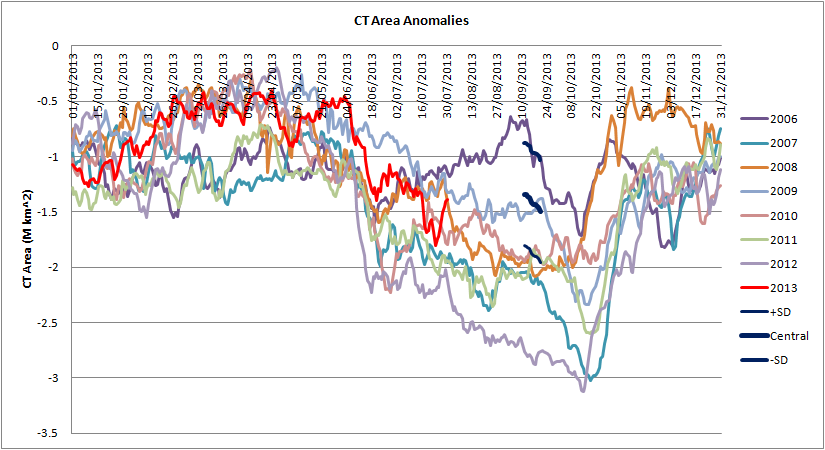 This plateau of CT Area has put my prediction back in the running, the prediction is shown in the thick dark blue lines, specifically my prediction is between the indicators for Central and -SD (-1.25 standard deviations of June 30 to minimum loss). However I still would not be surprised if we go below the lower bound of that and into the region of the 2007 or 2011 record years.

I've been discussing this plateau over at the forum, and had been tending toward viewing the anomaly behaviour as indicative of a rapid melt pond formation followed by rapid drainage. However although this is probably part of the cause with respect to the July cliff, I suspect that the major factor in the plateau is the development of strong low pressure after the 24 July.

Using WetterZentrale, link, I've followed the development of a strong low pressure after 24 July. This can also be seen in NCEP/NCAR reanalysis. First the average sea level pressure (SLP) for the seven day period to 23 July.

Then for the seven day period after 24 July the central low over the Arctic intensifies as do the high pressures around it. In the average this brings about a strong anti-clockwise air motion around the periphery of the pack. This pattern of a central low surrounded by highs is not just a feature of the anomaly, it is present in the mean.

Due to Ekman Transport, link, this should create a net divergence of the pack, i.e. a movement away from the centre. I suspect that the 8 day plateau in loss is mainly due to this net divergence, however the most likely way to create a 'cliff' such as that which preceded the plateau does seem to be melt ponding.

In my previous post I suggested that we could be in for a large degree of melt in August if the HYCOM model is correct. I still think this may be the case, and although over only three days the CT Area data has put my prediction back in the running, I am not assuming that anomalies will remain level (loss rates similar to the baseline average), I still think we could see strong loss over August. However I do think beating 2011 by a large degree is unlikely, and beating 2012 near impossible.

The above plot shows the CT Area on 31 July for all years of the dataset, and the area at minimum up to 2012. This shows how massive a loss would be needed for CT Area to beat 2012.

Considering the losses from 31 July to minimum for each year does not suggest a trend, this implies that weather is the prime factor, not the progressive deterioration of ice state. If we take the greatest July losses as being around 1.8M km^2 then using current CT Area and assuming this year will be a high end loss the CT Area at minimum would be around 3.0M km^2, in the same ball park as 2007 or 2011. But to reach 2012's area at minimum would need a loss of around 2.6M km^2, this has never happened, not by a long way, as the above graph shows.

Although I still have doubts about my prediction being successful, and still think that by September I will probably be determining the sigma deviation of the result (based on standard deviation of June 30 to minimum losses). I am not changing my prediction at this late stage in the game.

I disagree that divergence is the answer - you'd expect that to affect extent but not area.

I think the answer's melt ponds again - but not drainage thereof. Look at the oBuoy cameras, look at the temperatures in the Beaufort under the low. The ponds are freezing over again and are in some cases covered up with fresh snow.

Look at the CT animation here and watch the way the deep purples have reappeared in the northern Beaufort and north of the Canadian Arctic Archipelago.
http://arctic.atmos.uiuc.edu/CT/animate.arctic.color.0.html

Storms that aren't strong enough to bring up warm water and melt the ice from below are a very powerful negative feedback. Temperatures are down, albedo is up, the melt season in that part of the basin is ending early.

If you look at the Cryosphere Today plotter the ice edge in Beaufort/Chukchi recedes until 24 July, when the recession largely stops. CT Area has quite a course grid that will miss the sort of detail seen in MODIS, divergence of leads can occur that does not affect CT Area.

I agree that melt ponds are a factor, I don't agree they're the only one.

It's neither melt ponds draining/freezing nor divergence. It's clouds. The past few days have been quite cloudy over much of the CAB, and the satellite sensor algorithms tend to over-estimate ice concentration in areas covered by overcast on that particular day.

Looking at ECMWF , we will have low pressure over the CAB for another full week, which will probably cause continued overcast.

I never thought I'd live to see a day when the clouds were so stubborn over the area and stay around for two full weeks with virtually no break at all. But here we are seeing it.

I really don't think it's just clouds, although I'm not going to argue that CT Area could drop massively in the weeks to come.

Temperatures over the pack are down, in some places dipping below freezing regularly for periods during the day. And as I've pointed out at the forum, link, there is a drop in MASIE trends around the time of the CT Area plateau(probably more like a ledge actually).

But I have observed the effect of clouds, and you're right they do have an effect.

I'm resigned to this being just another question I can't answer.