Here in the UK we've had another cool wet summer dominated by low pressure systems. UK temperature is notably very variable, this is due to our location and the interplay of weather systems. We're in the battleground between continental European, and maritime Atlantic air masses, at the end of the Jetstream's path across the Atlantic.
Unfortunately the NCEP/NCAR interface doesn't allow me to compare a string of years seasonally, and looking for any changes in the summer weather needs to be seasonally based (by definition). However there is a publicly available dataset that does allow me to look at temperatures, the world's longest instrumental temperature series, the Central England Temperature series (CET).


When people complain about a cool summer the complaint is really about daytime temperatures, typified by peak temperature. So I've used the CET June July August average peak temperature, available here. Somewhat arbitrarily I've chosen to use data since 1975, 1975 is the start of the trend of recent global warming. But I just needed to include a significant time period prior to recent years for context, without losing the detail in recent years. 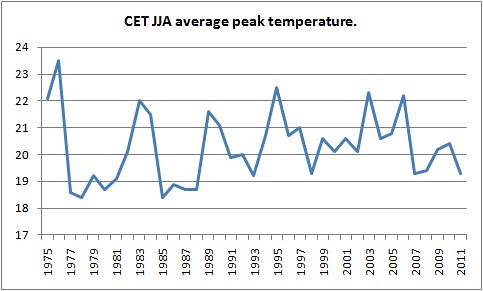 So it's clear that there's a lot of interannual variabilty between summers, as is to be expected. There are also periods where after peaks there have been drops in temperature. Amidst this variance I'm not stupid enough to make strong assertions. However it is interesting that since 2007 we've had cool summers.

As there seems to be the suggestion of a break in the trend after 2007 I've calculated the trend from 1975 to 2006, and deducted this from the temperature series, 1975 to 2011. The remainer is termed the 'residuals', that is residuals from the trend. 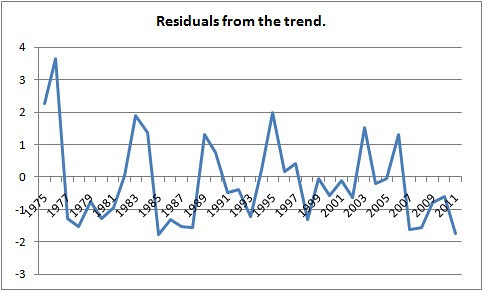 The reduction below the pre-existing trend since 2007 isn't unprecedented, but it is notable. So why this apparent predominance of cool weather since 2007? Why focus on 2007 at all? Well in 2007 the Arctic lost a quarter of it's area and has maintained that loss since (ref), meaning much more open water instead of sea-ice.


Is there a connection between UK summers and the Arctic? Or is this just a random variation in weather that's totally unrelated to the loss of sea-ice? I suspect the former, time will tell if it's the latter.
Posted by Chris Reynolds at 12:19

Interesting observation. If UK summer temps were related to the area of Arctic ice we might expect to see summer temps declining throughout the record in correlation with the declining trend in ice.

Clearly this doesn't appear to be the case. Perhaps 2007 was a tipping point? I hope not, warmer UK summers was one of the few climate change pluses I was looking forward to.

Having read the recent replies from Kevin O'Neill I'm beginning to appreciate the real breadth and depth of the impact of 2007. We really live in a post-2007 world now.

Having been messing around with NCEP/NCAR for the last few hours I may add a PS or even a follow up post on this. I think I gave up too easily on it before posting the main article.