The Big Dry in South East Australia is a classic case of the complexity with which AGW affects climate. I've chosen to write about it because the linkage is more subtle even than just an AGW interaction with a mode of variability in the atmosphere. Yet the AGW role is as clear as it has proven devastating for South East Australia.

The Indian Ocean Dipole (IOD) has been found to have a role in droughts in Australia. However, as far as I've read, there isn't a strong fingerprint of AGW on the IOD itself. It's true that warming of sea surface temperatures on a global average is due to AGW e.g. Realclimate, however that alone tells us little about warming in the Indian Ocean and it's impacts on the IOD. Furthermore there's no suggestion of a trend in the graphic below.

In Ummenhoffer et al the authors show that incidence of South East Australian drought is linked to the IOD and to a lesser degree the ENSO, which does have a more significant role in Southern and Northern Australia. 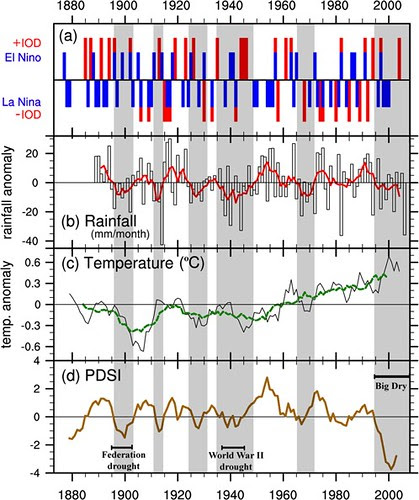 Panel A shows the IOD (red) and ENSO (blue) indices, above the x axis is +IOD and El Nino, below the axis is -IOD and La Nina. Panel B shows the rainfall series, note that recent rainfall is not unusual for the area. Panel C shows the temperature series, showing an increase in recent years. And finally panel D shows the Palmer Drought Severity Index (PDSI). This recent warming, coupled with droughts that are not unusual in historical context, has lead to a decrease in the Palmer Drought Severity Index. As that index is an inverse index this means that droughts have intensified. However notable in panel D is that the recent PDSI is remarkable in the context of the historical series. This is because increased potential evaporation due to the warming has exacerbated the drought.

Karoly and Braganza undertook a modelling study looking at the cause of recent Australian warming. They compared model runs with all factors and runs with only natural (not anthropogenic) factors. The following graphic is their figure 3. 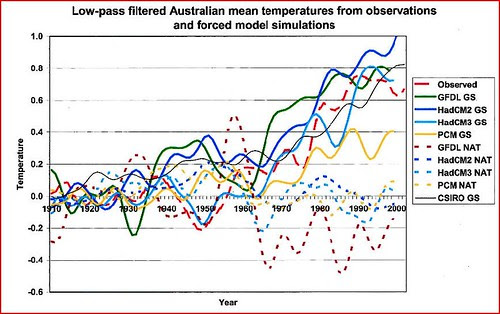 So in South East Australia the occurrence of droughts is related mainly to the Indian Ocean Dipole, AGW doesn't cause the droughts there. However AGW has caused regional warming, this warming has intensified moisture loss in the soil, so the most recent drought period (The Big Dry) has been most intense, despite rainfall not being the lowest in the timeseries.

Australia's Bureau of Meteorology (BOM) has some excellent resources on the IOD, see here.
Posted by Chris Reynolds at 12:11