Cooling of the Arctic Stratosphere since 2007

In comments on my earlier post "Arctic Dipole: A Positive Feedback" Kevin O'Neill raised an intriguing point regarding stratospheric cooling and tropospheric warming in the post 2007 period during the summer (June - August).He also pointing out that there was a mixed picture previously, see here. Kevin's graphic is here.

This has had me puzzling over it for the last few days, so yet again the posts I was going to do on the recent cold winters will be delayed. However I think I now have a reasonable explanation for the observations Kevin raised.

Note that this post concerns what is going on in the region from the Beaufort Sea to the Laptev Sea up to the pole.

Firstly here's the atmospheric profile from 1000mb (surface) to 10mb (high in the stratosphere). 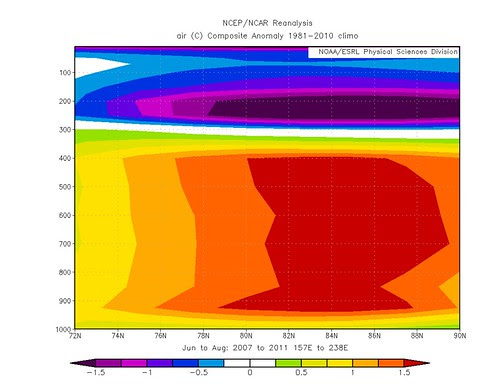 The troposphere is from the surface to about 300mb and is a region where temperature decreases with height (negative lapse rate), whereas the stratosphere, above 300mb, has a positive lapse rate; temperature increases with height. From the above graphic it can be seen that there is a warming mass above the surface and into the troposphere between the sea-ice edge and the pole. Counterpoised with this is a stratospheric cooling.

What is causing the tropospheric warming? Obviously during the summer post 2007 there's a significantly higher amount of open water. Relative humidity is down, but specific humidity is up, which suggests temperatures have risen faster than humidity (note humidity only goes up to 300mb). 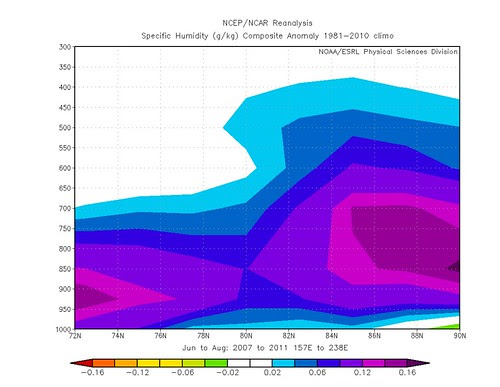 Specific humidity up to 300mb.

Note that the ice edge is around 76degN in the post 2007 period, which seems to support my notion that the increase in humidity is due to the reduction in sea-ice. I'd suggest (in a handwaving sense without calculations) that the tropospheric warming is likely to be due to a combination of increased infra-red and latent heat release from condensing water vapour.

But why is the stratosphere cooling? My best guess is as follows.

Here's the geopotential height anomaly for the period after 2007. 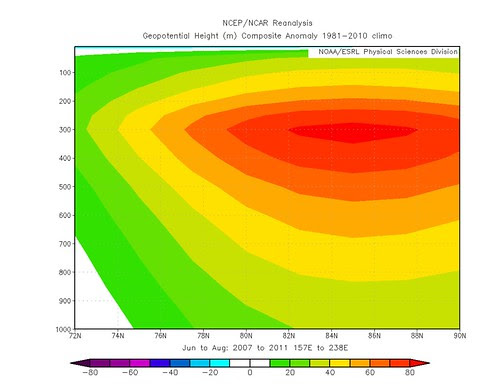 This pattern fits with the temperature anomaly, in that the area of maximum anomaly is around 82 to 86 degN. In terms of pressure the anomaly is at its greatest around the tropopause. This pattern suggests a bulge in the troposphere that is displacing the stratosphere. 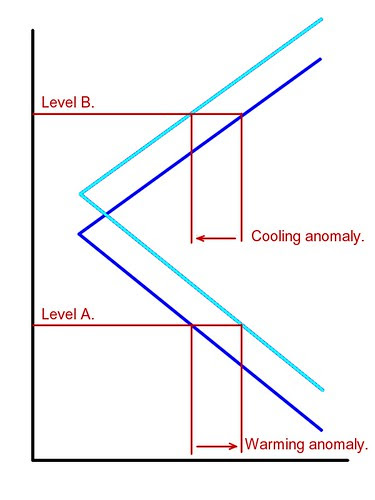 With the warming driven bulge in the troposphere the profile moves up from the dark to the light blue profile. So at level A we see that the move from the original profile (dark blue) to the new profile (light blue) entails a warming. However at the same time above the tropopause in the stratosphere at level B the move from dark to light blue entails a cooling.

The same process also applies in the spring, March to May. In the autumn, September to October, the atmosphere has rapidly cooled, restricting the waming caused by late season open water and ice formation to the very lowest level of the troposphere, i.e. warming and geopotential height anomalies show much less of an impact throughout the column and a negligible stratospheric cooling.

So I think that in general terms the tropspheric warming driven by the loss of sea-ice is causing a bulging of the troposphere, this drives the tropopause higher, which is forcing the decrease in temperature anomaly in the stratosphere. I stress that this is a regional process and doesn't account for the global trends in stratospheric cooling, which is due to CO2 and to a lesser extent CFCs, e.g. here.

But that's just the best guess of someone who's not a professional scientist, much less an atmospheric physicist.
Posted by Chris Reynolds at 03:40

Thanks for deciphering this :)

Weather (sic) or not you're correct, it's the best answer I've seen. Did you run across any of these during your research?

With regards the links, thanks, it's No, Yes, No.

That last paper has just gone straight to the top of my reading list.

Chris,
This is very good work.
The tropospheric warming makes sense, considering the increase in water vapor (a strong GHG). However, I'm not so sure if the stratospheric cooling makes physical sense.

Stratospheric cooling implies that there is some increase in GHG concentration in the stratosphere, which acts as the cooling agent. The NCEP/NCAR data product seems to suggest that water vapor does not increase (noticably) above 300mb.

You know, I take that back.
Or in fact, I think there IS a physical explanation for why the stratosphere would cool if the troposphere shows (much) more water vapor :

Consider the fact that the surface temperature of open ocean in the Actic is not much different than the surface temperature of ice in summer. Both are close to 0 C.
So if the amount of water vapor (the specific humidity) is up in the troposphere, then the temperature at the radiative top-of-water-vapor layer in the troposphere will be lower than before, resulting in a less-than-normal radiation upward (towards the stratosphere). If we assume that all other factors in the stratosphere remain unchanged (ozone, GHG concentration etc) this means that the stratosphere will be 'heated' less than before, and will thus cool.

Now, I'm not sure exactly how that effect is quantifiable using the 'geopotential height' other than that this seems to be a measure of the amount of water vapor in the air, but the effect I just described should be very accurately quantifiable by using a radiative transfer model like MODTRAN on the NCEP/NCAR tropospheric water vapor anomaly that you show in the second picture.

If all this is correct, that should explain the stratospheric cooling observed, but it does not explain why (so much) water vapor ended up in the (still cold) troposphere... Does open water evaporate much easier than ice sublimates, even at close to 0 C ?
Or is there an atmospheric (winds from lower latitude or so) explanation for the more-than-expected water vapor increase in the below 300mb troposphere ?

Yes open water should produce more water vapour than sublimation. After all in the former case it's simply the next phase, in the latter case the molecules 'skip' a phase (that being the liquid phase).

The problem I have with your proposed mechanism can be seen by comparing the first and second figures. I should have numbered them but let's just agree that figure 1 is the first figure, 2 the second, and so on.

Figure 1 shows an area of >1.5K warming right up to 400mbar, with lesser warming past 350mbar. Figure 2 shows a bulge in increased humidity up to 350mbar. Surely these warmer layers, close to the stratosphere will radiate more?

Indeed, I'm sorry for not posting this in the main post, but I did check out NOAA interpolated OLR at NCEP/NCAR. Due to the massive size of the url I'll have to post the link in the following reply - it shows an increase in OLR of 2.5 to 7.5 W/m^2 over the area in question.

NCEP/NCAR, Interpolated OLR for the period and area concerned. Link

Chris,
You are right. The warming of the upper troposphere seems to exceed the increase in water vapor concentration (which is to be expected). The resulting mild increase in OLR is very compelling evidence for that.

So I'm with you now regarding local radiative effects to explain the drop in summer stratospheric temps. It is not obvious what is going on there. By the way, do we have data for ozone concentrations in the summer time over the past decade or so ?

Incidentally, the link between ENSO and Arctic statospheric temps (including ozone column) seems interesting, Here for example :
http://www.atmos-chem-phys.org/9/8935/2009/acp-9-8935-2009.pdf
Even though that effect is significant only in winter/spring. So the 2010/2011 strong La Nina probably caused the very low March stratospheric temps in the Arctic and low ozone levels). But not sure how that works it way through into the summer..

NCEP/NCAR seems to report specific humidity only to 300mb. If actually some of that bulge of water vapor at 300mb (from figure 3) made it above the tropopause to 200mb, it would almost certainly explain the strong cooling in the lower stratosphere since 2007.

I'd pondered that too, but figure 2 above suggests not. Most (all?) of the flow into the polar stratosphere is via the Brewer Dobson circulation that originates in the tropical stratosphere.

I'll keep pondering on this though, I'm only just over half convinced by the explanation I've given.

Chris and Rob - remember we're looking at model output (NCEP/NCAR) constrained by observations. There aren't a lot of observations for some of these parameters in the arctic.

I try (not always successfully) to remember that we could be looking at a model artifact/error. The 'Boundary Layer' paper by Kay I linked to in my first comment is an example of how we could be chasing ghosts in the data; the CAM4 model consistently produced clouds over Arctic seas where the sea ice had melted while observations showed few if any clouds.

Lacking observations, the NCEP/NCAR model could be generating similar mistakes.

Chris I'm only just over half convinced by the explanation I've given.

I'm actually think that your explanation (increase of the tropopause due to increase geopotential height) is the only one that is consistent with all the NCEP/NCAP results.

After all, figure 1 does show that the temperature increased from 950mb all the way to 400mb. This should indeed cause the same amount (mass) of air to take up more space, which means that the tropopause should indeed be higher. In fact, the tropopause should be pushed up exactly as much as the temperature profile below it suggest. Which means the tropopause temperature should stay the same, albeit higher than before, which is exactly consistent with your analysis dispayed in figure 4. Figure 3 (geophysical height) is simply a calculation of the mass concentration, which obviously increases with altitude in a warmer troposphere. Figure 2 (water vapor) is simply showing that the warmer air holds more water vapor, which makes perfect physical sense too.

The lower statosphere then cools because it is squeezed between two 'cold sources' : the tropopause below and the optical depth to space that determines stratospheric 'lapse rate'.

None of this explanation requires any change in GHGs, water vapor, ozone or otherwise.

The only remaining question (at least for me) is this :

Why does most of the heating in the troposphere (figure 1) happen above 82N (where there is still ice) instead of below that latitude (where the newly formed open ocean is that we think caused all of this).

Rob asks:
"Why does most of the heating in the troposphere (figure 1) happen above 82N (where there is still ice) instead of below that latitude (where the newly formed open ocean is that we think caused all of this)?"

Can this be explained by the albedo effect? The open water takes in the anomalous energy, the ice reflects it back. Some of that reflected energy will be absorbed in the troposphere.

I'm not sure. I've pondered why the anomalies are strongest over the central pack but can't figure out a satisfactory explanation. It's notable in Overland and Wang, but they don't explain why.

One thing to bear in mind is that the NCEP/NCAR anomalies are now all based on 1981 to 2010. So anything that's been happening over the periphery - which would typically have open water - wouldn't be as anomalous as what happens over the pack ice interior.