The Loss of the Ellesmere Ice Shelves

In April 2001 the Journal "Polar Record" published a paper by Vincent, Gibson and Jeffries entitled: "Ice-shelf collapse, climate change, and habitat loss in the Canadian high Arctic." hereafter referred to as Vincent et al.
They started their discussion by stating:


The records of the early explorers in high Arctic Canada
provide clear evidence that a fringe of thick, undulating ice
existed along the northern Ellesmere Island coastline,
forming a large and possibly continuous ice shelf. Peary's
records also draw attention to substantial amounts of surface
meltwater that formed in mid-summer at almost all sites on the
Ellesmere Ice Shelf. For example, in his notes on Milne Bay
(Fig. 4) on 11 July 1906, Peary referred to `the devil-inspired
labyrinth of lakes and rivers set in a morass of knee-deep
slush which fills this bay' (1907: 225), while in Nansen
Sound he recorded a `continuous sheet of water' that
would eventually drain from the ice (1907: 213). These
observations suggest that even in the early twentieth century
there was a precarious balance between ice accretion and
ablation. Large-scale disintegration of the ice shelf took
place between the time of Peary's expedition and aerial surveys
in the late 1940s, with additional changes over the latter half of
the century. The RADARSAT observations from 1998
and 1999 indicate that the present-day remnants of the ice
shelf now amount to 9.6% of the estimated total extent of the
Ellesmere Ice Shelf in 1906.

Vincent et al report findings as to the age and original persistence of this ice shelf citing Evans and England (1992) who found driftwood that indicated that the ice shelf first grew in response to a cooling some 4000 years ago. Jakobsson et al 2010 later confirm this, citing more research by England showing no driftwood after 5500 years ago. Vincent et al note the speculation as to what had caused the recession of this vast ice shelf, noting theories around tidal action, changes in winds, and even resonant vibrations in the ice sheet.

As noted by Vincent et al, in the Antarctic Peninsular there has been substantial ice shelf loss due to regional warming, and the meteorological records from Alert (on Ellesmere Island) did not suggest a reduction in precipitation (snowfall). This suggested that the reason for the decline of the ice shelf was not due to a reduction in accretion (ice gain due to snowfall), but that the reduction was probably due to warming. Indeed the most striking loss of area appears to have been in the period between 1906 and the 1940s, which was probably due to the regional warming of that period. The Arctic is now warmer than it was in that period, e.g. Tamino. This fact alone suggests that whatever is left of the once expensive ice-shelves will not be there for much longer.

Perhaps what is most striking about this paper is the context of the decade since publication, during which we've seen a substantial loss of both volume and area of Arctic sea-ice and a massive warming. For those who's prejudice means they don't like Tamino I recommend Bengtsson 2004 figure 1, which is Arctic temperature from Johanessen et al (see refs in Bengtsson et al). Or you could just refer to the graph below (black line is observations).

Even more striking is how little of the ice-shelves are left now, 10 years on; Neven's Arctic Sea-Ice blog reports on their final decline here.

With regards the massive loss of the Ellesmere ice shelf between 1906 and the 1940s, I'd better say a little more as I've touched on what I consider an important paper. Bengtsson et al propose a hypothesis to account for the warming, that it was due to internal variability in the Arctic climate system, with temperature amplification by loss of Arctic sea-ice. I find their arguments persuasive, rather than re-hash them I suggest interested readers refer to their paper. One additional piece of evidence I'd put forward in support of their hypothesis is Gillett et al. They carried out a modelling study that found "the observed changes in Arctic and Antarctic temperatures are not consistent with internal climate variability or natural climate drivers alone, and are directly attributable to human influence." Their approach is the classic, all forcings / natural only forcings approach. 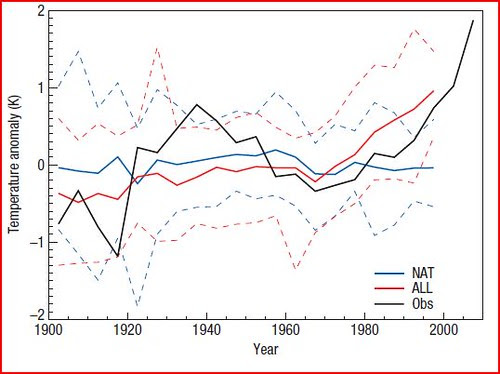 
Concentrating on the Arctic (my pet obsession), as you can see the natural forcings (NAT) does not reproduce the recent warming. Whereas the all-forcings (ALL i.e. natural and anthropogenic) reproduces a warming at the end of the period, as is seen in the observations. What is striking in terms of the 1940s is that both NAT and ALL fail to reproduce the 1940s warming, individual ensemble members might, but not enough members for it to appear in the ensemble mean. This suggests to me that the 1940s warming was not directly an outcome of externally forced changes, external to the Arctic that is. Were it a feature imposed by forces from outside the Arctic it would appear in all/most ensemble members and thus would impact the ensemble mean. That it does not appear in all ensemble members is telling. This is the behaviour I'd expect to see if Bengtsson et al are correct; that the 1940s warming was an outcome of internal variability in the Arctic. Now in terms of the recent warming, this is modelled as a rise in the ALL forcings ensemble, because it's externally forced, not an outcome of internal variability.

It could be suggested that poor model simulation of sea-ice may be the cause of failing to reproduce the 1940s warming. However if we're to view the sea-ice role as an amplifier, we should see an under-performance with regards the 1940s warming, we don't, we see a total absence in both NAT and ALL. That's before we get to the colder period before the 1940s, again as the model doesn't show it I'm suspecting internal variability of the climate in the region.

Isn't this just defending a crap model? No. Because for the recent period where we know there's a massive forcing of origin external to the region (CO2 increases), the model shows a warming when this is taken into account (ALL), but doesn't when it isn't (NAT). Showing that the recent warming is due to human activities, and supporting the suggestion that the recent warming is different in nature to the past. Other research bears out this difference, for example Overland et al points out that the 2000 to 2007 warming period has a substantially different pattern to the earlier warming culminating in the 1940s peak.

Update:
Courtesy of Mauri Pelto, a glaciologist: The retreat of the Devon and Penny Ice Caps show the reponse to regional warming of glaciers above sea level. Also in "Sharply increased mass loss from glaciers and ice caps in the Canadian Arctic Archipelago."(abstract) Gardner et al note:

Given the rate of increase of warming in the region, and that this will accelerate as the Arctic continues it's transition, and the Canadian Arctic Archipelago exhibits more summer open water, the mass losses in this region will continue to accelerate.
Posted by Chris Reynolds at 12:48

This isn't worth a post on it's own. I'll leave the link here as an 'easter egg' to this post for anyone needing some light relief. Gave me a chuckle.