The Beaufort Sea is shown in the map below, from Cryosphere Today. 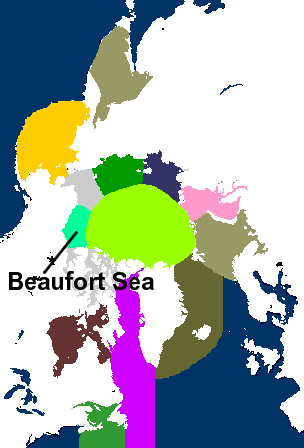 In my  post on April PIOMAS I showed how FUBAR Beaufort is in terms of PIOMAS Gice, the sub grid thickness distribution, data for day 121, 30 April in 2016. 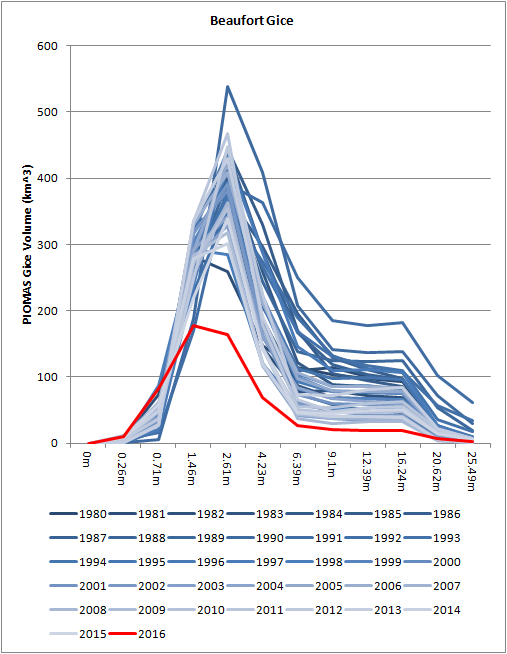 Over the last few days Beaufort Sea's sea ice extent has levelled, actually this happened just about the time I posted about the drop in Beaufort. Sometimes I get the feeling the sea ice does stuff to spite me. 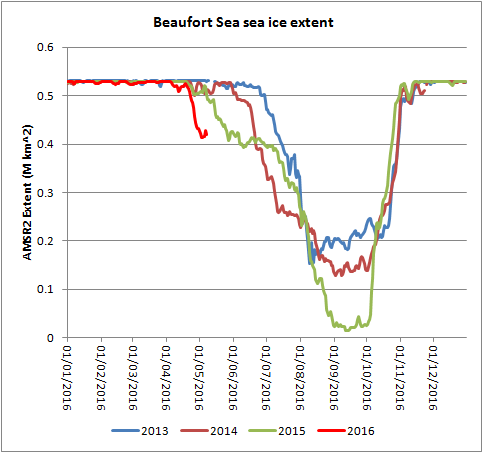 So what has happened? The inflection happens on 3 May, so I take 5 days including 3 May before and after that date and plot vector wind from NCEP/NCAR.

The period of fall during 29 April 2016 to 3 May 2016 is marked by strong winds from Banks Island (right hand edge of the red region in the graphic below), into the Beaufort Sea, driving ice away from the coast and increasing the open water.

Compare that to the stall period, 3 May to 7 May, where winds blow from the Central Arctic towards the Alaskan coast.

So what was compactness doing at the time? Compactness is the ratio Area / Extent, and is indicative of the amount of dispersal of the ice. When compactness is 1 the ice is as compact as it can be, when it is towards 0 the pack is highly dispersed. 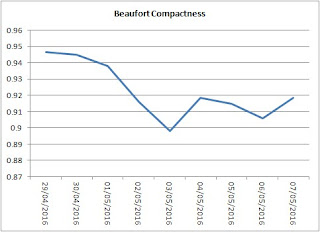 During the period of fall in extent the compactness was falling too, indicating that the wind (and some melt perhaps) was dispersing the pack as it opened the open water off Banks Island. When the new wind regime set in, it caused a slight recovery of compactness.

This shift was caused by the collapse of a dipole between low in the north Pacific and high over much of the Arctic Ocean, the Arctic Ocean high moved to the Atlantic side of the ocean and drew the high wind stress away from the Beaufort sea by reducing the pressure gradient between the two pressure systems. This is a satisfactory point to start looking further back, because winds play a role in how Beaufort got into the current state.

First off I need to identify when the excursion from normal took place. So here is a graphic showing the difference from monthly average volume, where the average is from 2007 to 2015. 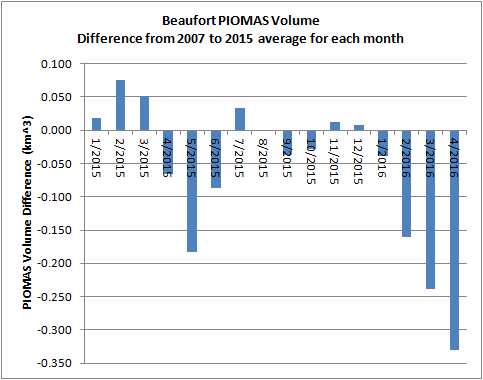 The volume deviation seems to have started in January and is marked by February, being increased in March and April. So we're looking at the last four months.

In the above working I have used vector wind from NCEP/NCAR, now I'm going to use zonal wind. Zonal wind is the component of the wind that blows along the parallels of lattitude, by convention a negative zonal wind blows east to west, positive west to east (the way the earth spins). The winds shown above that move air (ice) out of the Beaufort Sea away from Banks Island blow from east to west and the component that drives that motion of air is a negative zonal wind. Due to Ekman transport the ice actually moves roughly 45deg to the right of the wind forcing.

The table below shows temperature and zonal wind at the surface for the region bounded by 75degN to 67.5degN, and 205degE to 235degE, roughly the region of the Beaufort Sea. SLP is for 67.5degN to 90degN, and 180degE to 270degE, which is intended to give an indication of the Beaufort High, which is active in that sector, the Beaufort high was not unusual by that measure this winter so is merely shown for completeness.


January and February were very warm over Beaufort, while March a April have been less anomalously warm. While all through the months shown the zonal wind has been stronger than normal from Banks Island towards the west (towards the Chukchi Sea).

But is any of this unusual?

We know temperatures have been warm across the Arctic, but what of Beaufort? The following graph shows the average surface temperature anomaly for January to April. 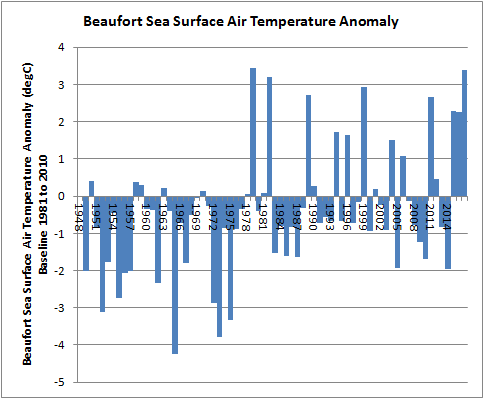 Beaufort Sea has been unusually warm, but in the context of past years it is not exceptional. In the following map plot it is seen to be very warm at the surface over the pack towards the pole from Beaufort, Beaufort was actually spared the worst of it. 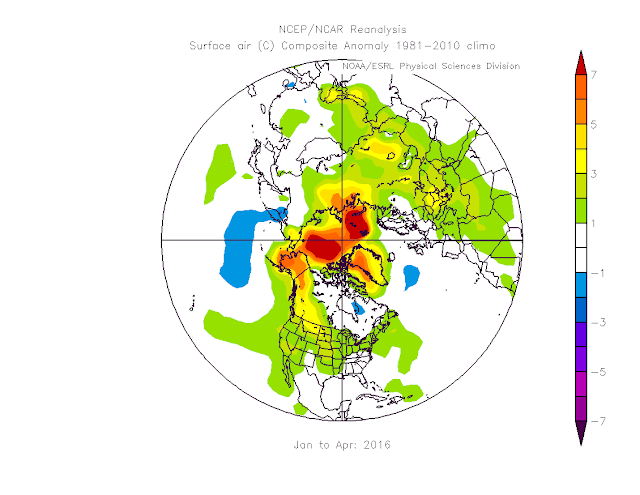 Taking a cross section  through the atmosphere this is accentuated at the surface, probably due to a collapse of the surface inversion typical over the ice but weaker in recent years. The sea ice being from roughly 70degN to the pole, 90degN. 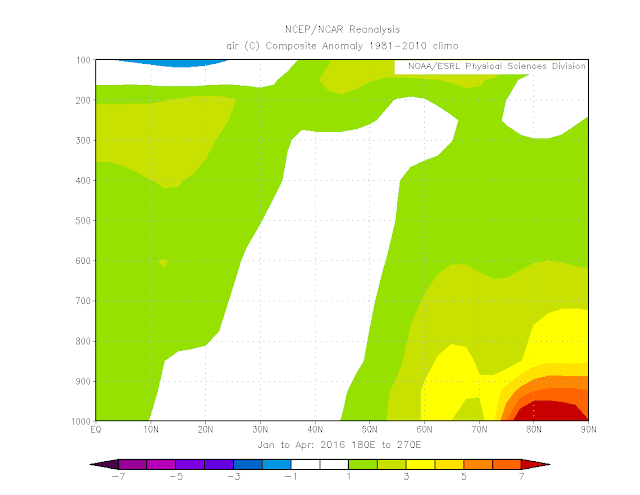 But this warming is associated with a warming aloft and outside the Arctic Ocean, down to the same latitude as where I live in the UK. So the simplest explanation is that a wider warming probably caused by air movement into the Arctic has broken the inversion down causing warm temperatures at the surface, and this is less likely to be a primary result from thinner sea ice.

It is work looking at Beaufort volume at the end of April from PIOMAS gice. 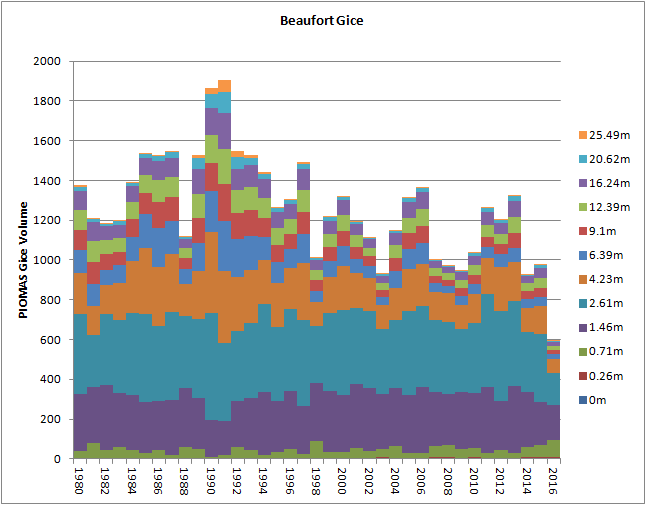 This doesn't suggest that temperatures are the cause of the collapsed state of sea ice over this winter. Whilst a lot of discourse in the amateur sea ice community has centred on warm temperatures and their catastrophic impact on ice it seems the culprit for the collapsed state of Beaufort is wind, not warmth.

What I think has been happening is that ice has been driven out of Beaufort towards Chukchi at abnormal rates over January to April. This has been opening up areas of open water which have frozen quickly, the ice has then been shifted out never getting the chance to thicken in Beaufort.

This might be a reason that thicker ice has increased in Chukchi and possibly the East Siberian Sea (ESS) over this winter (the following two Gice plots are for day 121, 30 April in 2016). The winds and the thinner ice, together with movement of the ice increases compression ridging with resulting thick mechanically deformed ice. 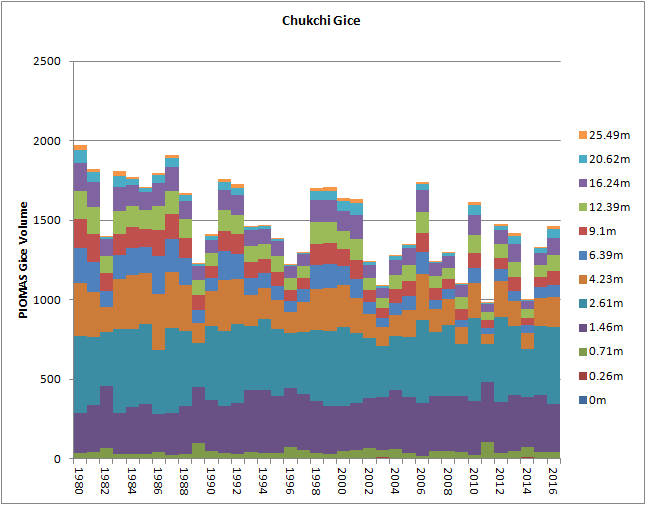 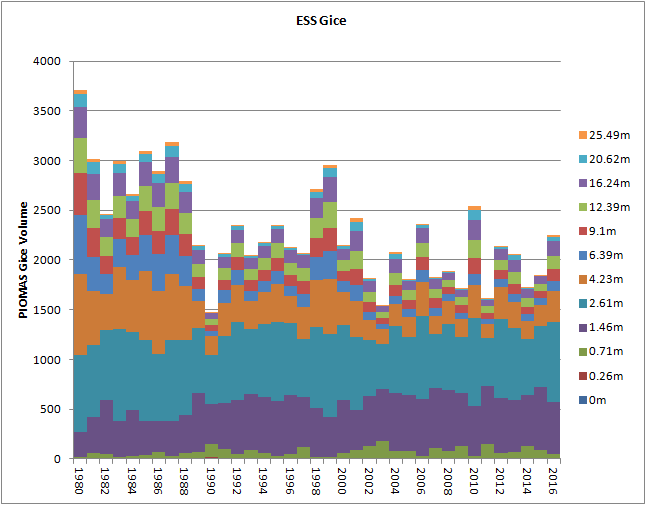 So that, Iceman, is my best guess.
Posted by Chris Reynolds at 13:12

I've been watching the changes in the cryostat data over the last couple weeks. By comparing the 14 day thickness to the 28 day thickness some evidence of what regional changes are taking place is apparent. A considerable increase in the ice thickness is happening on the basin side of the Beaufort from the compression induced by the gyre. Lately, the ESS and Laptev regions of the Basin are also turning red/yellow to indicate ridging to 2.5M.

That massive ridged section formed by the winter's winds coming in from the Barent's side is still growing in place between the Pole and Fram strait with bigger pink spots of 3.5M .

It seems that the open areas along the Beaufort shore are evidence of the volume of ice that has been ridged to thicker areas in the adjacent sections.

Thanks for that Anon,

Cryosat is something I just don't get the time to follow that closely. Luckily there is always someone out there who is able to fill in the gaps.

The steadfast winds have been pushing ice out of the Beaufort this year, as you demonstrate; therefore the low ice volume. With this, the warm air temperatures (not record heat, but certainly a record warm 3-month average) have minimized or prevented ice growth west of Banks Island; therefore the low ice area.

My point in the above is that temperatures have been this high in Beaufort before without such a collapse in volume. But the winds really have been absolutely exceptional, so I think we should look to ice movement as the dominant factor over temperature.

BTW open water or thin ice will itself give rise to warming.

> re this question uopu asked me the Sea Ice Blog

"The weather this winter has been exceptionally weird. What impact does this have on the likelihood of a summer development of the Arctic Dipole set up, and what impact will it have on the persistence of such a set up through the summer?"

I have no idea on this one, my strategy starts with ignoring the weather and looking for predictors that are available in April/May such as the warmth of the past three years or the thickness distribution of the ice. I haven't looked at the effect of the Diploe.

David,
I'll reply over at Neven's.

Chris,
Am I wrong in what I said about Rignot disagreeing with Hansen?

David,
I didn't get round to it, will do so tonight or tomorrow. BTW did you get the data?

Dreessen,
I don't know. I've not been following the discussion. But I didn't find that Hansen paper very persuasive.