The interesting forecast addressed in my last post involving two cyclones, one being the remnants of tropical storm Molave, hasn't panned out. Such is the risk of using forecasts so far ahead. However the weather still will play a large role in the setting of the September, and it was such a remarkable forecast it was worthy of comment.

Anyway, this is a quick post to update the sea ice volume loss over July and the volume at the end of July using PIOMAS daily volume data. I have now updated all of the regional PIOMAS data available here to the most recent data available.

I also digress at the end to a outlook for the minimum September extent.


Being reminded of this resource by Michael Hauber (Thanks!), Andrew Slater's calculation of temperatures at 925mb pressure level over the Arctic Ocean shows that July was very warm in the context of years since 1979. 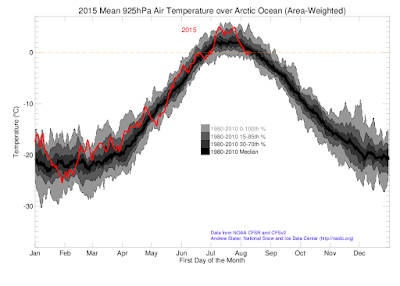 Looking back at the main PIOMAS volume series, I have calculated the ten day volume loss rate for past years up to the end of the current release of data. Years following 2007 are shown below, 2012 (orange) and 2015 (red) being highlighted, and the long term average (LTA; 1981 to 2010) shown in black. 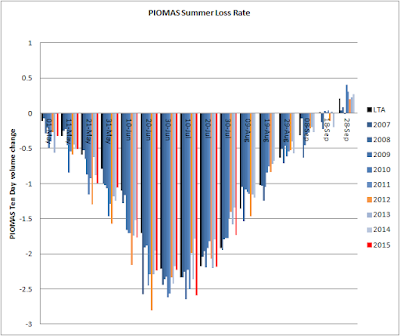 Using HiDay daily gridded sea ice data from PIOMAS I have calculated the volume losses from 1 June to 31 July for all available years (2000 to 2015). 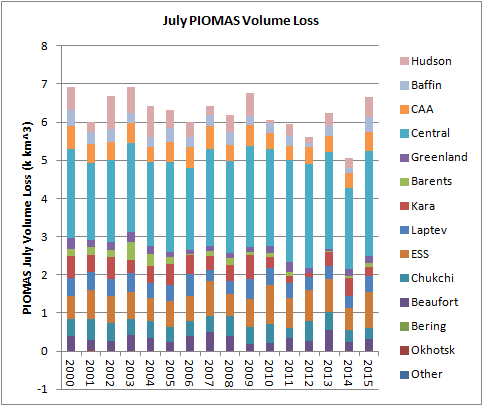 July 2015 saw the fourth highest volume losses since 2000 and strongly counters the poor losses of 2014. 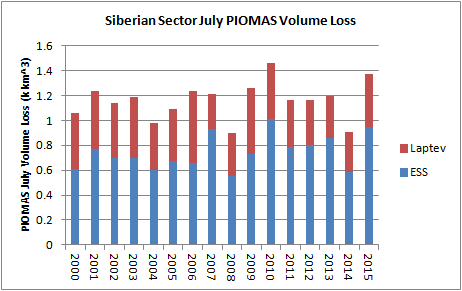 For the post 2000 period July 2015's volume loss is only beaten by 2010, the year of a large export of multi year ice into the East Siberian sea and a resulting volume loss event. This large loss in July 2015 is explained by the impact of the Arctic Dipole over the region through much of July. 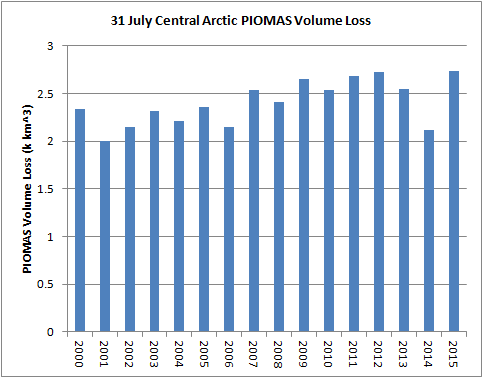 July Volume losses are increasing, 2014 saw reduced July loss in the Central Arctic, 2015 is back on the trend of increasing losses. So what does this mean for the volume increase gained since the 2012 minimum? 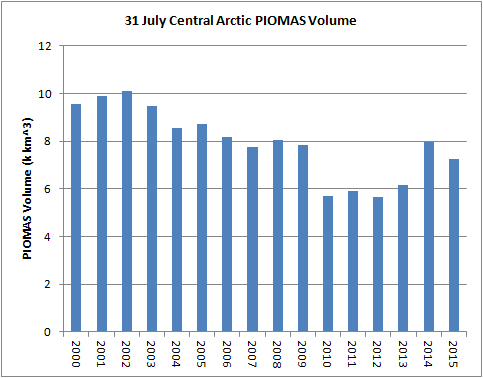 PIOMAS Volume as of 31 July 2015 is down from 2014, but less than half of the difference between 2012 and 2014 has been wiped out. This volume increase will carry over into the coming winter and become a major part of the initial conditions for summer 2016.

Overall this volume increase impacts total volume. Below is plotted the stacked volume contributions from all regions on 31 July since 2000. 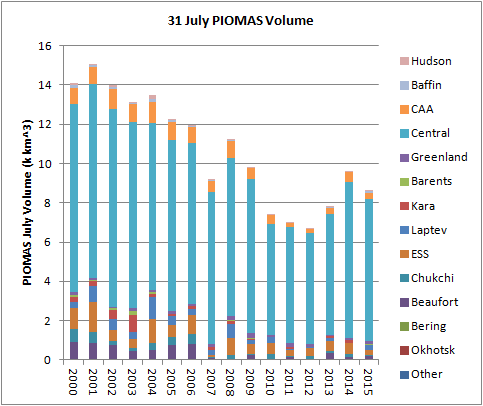 Whilst all other regions have similar 31 July volume after 2009/2010, the Central Arctic is holding up overall volume.

The Sea Ice Prediction Network extent predictions are based on the September Extent, which is the result of calculating average concentration of sea ice across September, then calculating the resulting extent. My prediction in June based on April data was 5.1 million kmsq +/- 0.64 million kmsq. When asked by SIPN about July and August I said my expectation was in the bottom half of that range, but that the original prediction should stand for July and August. During July my personal estimation went down, and by the end of July I fully expected my SIPN prediction to fail.

As a rough method I have done the following several times this summer. I take the most recent NSIDC extent data, and the September extent historic data. Then I calculate the drop from the current date to the September minimum, this compares different metrics but is just a back-of-an-envelope method. So using daily extent from 12 August (about 1 month to the daily minimum) I have a series of drops of extent. I take the drops for 2007 to 2014 and use these as 'scenarios', 6 of the 10 greatest losses are after 2007, I then apply those losses to the daily extent for 12 August 2015 to calculate what the extent would be for September if the losses from 2007 to 2012 were repeated.

That sort of rough reasoning combined with the above PIOMAS data has changed my expectation. I expect that the 2015 September minimum will be within the lower half of my June SIPN submission (using April PIOMAS data), that is between 4.51 and 5.15 (call it 4.5 to 5.2) million kmsq. September 2015 is likely to be in the lower part of that range, a small fail on the low side (below 4.5) is possible, but I consider it unlikely. (Asterisks in the above list denote the scenario extents within the lower half of my SIPN prediction.)

However equally claims of an imminent recovery of Arctic sea ice seem equally lacking in evidential support to me.
Posted by Chris Reynolds at 10:11

Chris,
Looking at the NSIDC numbers as of late, I would say your range is pretty good for that. On a side not, do you remember that A4Real blog I mentioned? Is that even worth following in your mind?

I don't see anything new regards methane since my series of blog posts on the subject, so am unwilling to invest more time until anything really new comes to light.

I tend to agree with you on that. And based on that link you provided me with on Portnov and the Kara Sea, it sounds like a steady release to me.

Chris,
Last question on CH4, would you agree with me on my appraisal of the Kara, and also, is the lack of any scientific mention of Antarctic CH4 under the ice since three years evidence that it's not an issue?

I don't get the relevance of Antarctica, the paleo history of Antarctica and the East Siberian Shelf is very different.

Kara may be a steady release, but I don't think that a) the rise is so large, or that b) we have enough years of close monitoring to say whether it is a linear or exponential increase. Of course I don't follow the data closely so may be educated on that.

However even a large increase may not continue. The evidence from pockmarks and landslides in the past suggests pulses of emissions can occur, but that they tend to be self limiting.

The reason I bring up the antarctic is due to this study that came out in 2012 that said it was likely CH4 was there in the sediments at shallow depth under the ice. Since then, not a word has been mentioned, which I find a bit weird. Anyway, here's the link if you're interested. It's a very short read: http://www.researchgate.net/publication/230762346_Potential_methane_reservoirs_beneath_Antarctica