How is the August extent loss going?

I have previously posted about an apparent oscillation in the August extent loss in recent years, nearing the end of August it is a reasonable time to look at how August losses are going in light of that possible oscillation.

My post on the August extent loss examined the loss in more detail, no need to go into that now, you can read it if you want. But here is the headline graphic of that post. 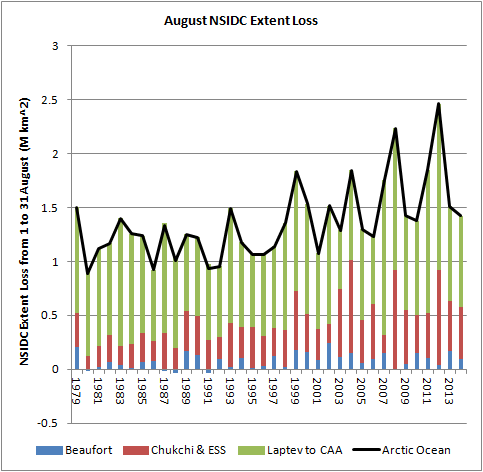 I'll update that in September, but for now I have used NSIDC extent to update using losses from 1 August to 26 August. 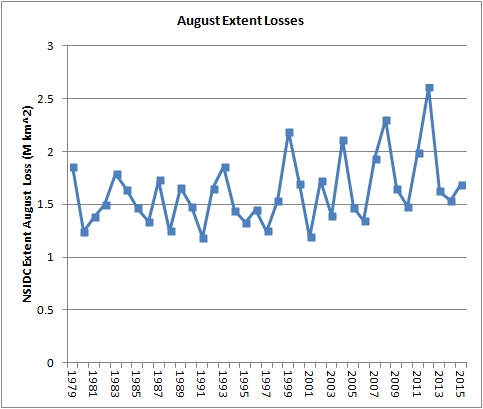 The final point is for losses from 1 to 26 August, so this is an unfair comparison, and at present it suggests a low August loss which isn't correct as we have five days of extent loss to go.

August loss so far is 1.688 million kmsq, the average day to day loss for the last ten days was 0.055 million kmsq (with a lot of variance), with 5 days left, assuming that average persists, we'd see a further loss of 0.2775 million kmsq, that could take overall losses to 1.966 million kmsq. Which would land us right in the ball park of just below 2 million kmsq that the supposed oscillation would require.
Posted by Chris Reynolds at 12:27

Chris or Neven,
Do either of you guys know much about Antarctic ice or know someone who does?

Sea ice or the ice sheet?

Either way I don't really know much. There are people at the sea ice forum who may know more and there's always Google.

Chris,
The thing is, I want to ask a scientist my questions, and I haven't had luck on Twitter, so I was hoping either you or Neven knew one I could ask.

Sorry Dreesen I don't know enough to help. I suggest you look for papers note the scientists who are looking at the sort of things you want to know about, and email them.

I think that oscillator device you bought is subconsciously influencing you, Chris. ;-)

The waveforms I'm really getting into are the spiky ones. When it was thundering last week I was messing around with two large coils at right angles to each other into each channel of the scope. I was getting over 0.5 volt peaks when the storm was overhead.

I've also been using some of my weights and a piezo electric disc, watching lorries pass on the road outside.

I'm going to have a break when I've done the summer round up and a post on the minimum. I think I'm going to get back into electronics...