Is the ice unusually fragmented?

I've been rather busy with a new piece of kit, a PicoScope 2206A, so haven't been commenting much on sea ice elsewhere. But this post is once again prompted by claims I read that the Arctic Ocean's ice pack is unusually fragmented. Is it really? Is comparing one year against another through gaps in clouds a satisfactory way of determining how fragmented the pack is?

I've looked at this issue back in 2013, where I used the ratio of IJIS Extent divided by Cryosphere Today Area. This is 'upside down' from the usual term 'compactness' but at the time I though a number increasing as the dispersion of the ice increased was a better index. Since then I have switched to the more typical measure of compactness, which is the ratio area / extent, and use the dataset provided by Wipneus. This is a better index as it's using the same base data to calculate area and extent and is a number between 1 and 0, where 1 is the state of total ice cover (area equal to extent) and the closer to zero the more dispersed the pack is.

Back in March of this year I looked at compactness and found evidence for decreasing compactness. Now I just want to take a quick look at compactness at this time of year using data to a current date. To reduce the effect of short term variations I have taken the average of compactness for 10 to 19 August from 1979 to 2015. 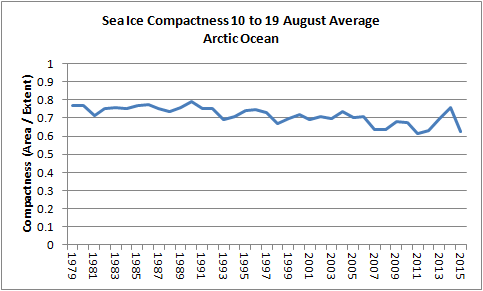 What is seen is a gradual decline in compactness, however current levels are similar to other post 2007 years. This tempered drop has been observed previously and is due to the Central Arctic, as will be seen. The Central Arctic region is the largest single region of the Arctic Ocean, it is shown in bright green in the map below. Also indicated in the map below are the Peripheral Seas of the Arctic Ocean Basin.

Compactness is falling in the Central Arctic region, but at a leisurely pace. 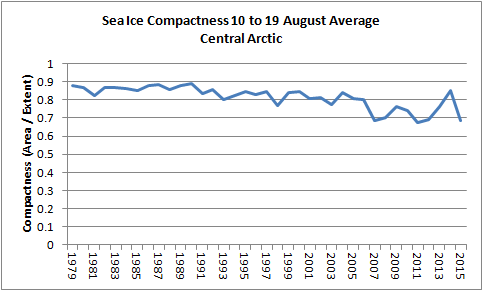 It is in the Peripheral Seas that we see the greatest decline in compactness. 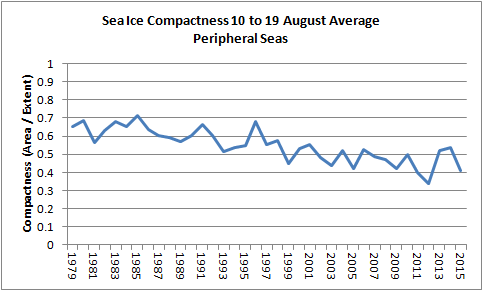 However the last ten days of compactness in the Peripheral Seas is similar to that seen in years since 2000, it is at the low end of the range, but is not highly unusual in the context of recent years. So I am not convinced that we are seeing a broad pattern of abnormally low concentration sea ice.

This of course has implications for claims that the sea ice is poised for an imminent crash, but that is an issue for another time.
Posted by Chris Reynolds at 13:30

Good job Chris. Your posts are informative as usual

Chris,
Please disregard my prior post linking to that Antarctica study. I find this link is much better at summarizing the data: http://news.nationalgeographic.com/news/2012/08/120831-antarctica-methane-global-warming-science-environment/.
This will be the last question I ask on CH4. All my others have been answered, so if you could take a quick look at the link and give me your first impressions, that would be great.

Personally, I think it's just another example of a feedback we don't need. I don't see it being a catastrophic event.

This post may warrant an update one of these days, because compactness is shooting through the roof (or at least, it is on my CAPIE graph).

I'll check on it over the weekend. I've been busy doing other stuff and must admit I haven't looked at sea ice for the last week.