Rather than do an August status post this close to the minimum, when the take-home message of the 2013 melt season is already clear, I've decided it's best to do a post on the summer melt of 2013. The actual minimum may warrant a further post, if so that will be done.


The following are plots of anomalies for CT Area (Cryosphere Today Area) and NSIDC Extent, anomalies based on 1980 to 1999 average for each dataset. Upper/lower/central are the prediction bounds for my CT Area prediction, I made no prediction for NSIDC Extent. 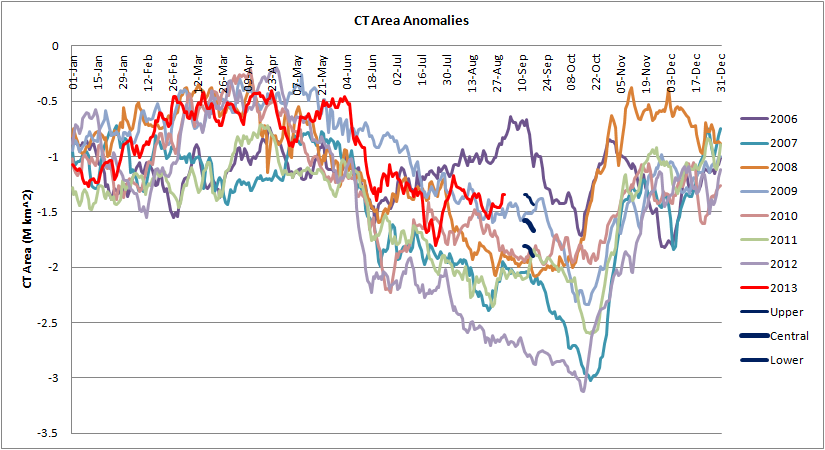 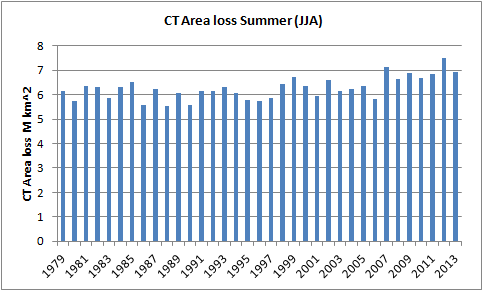 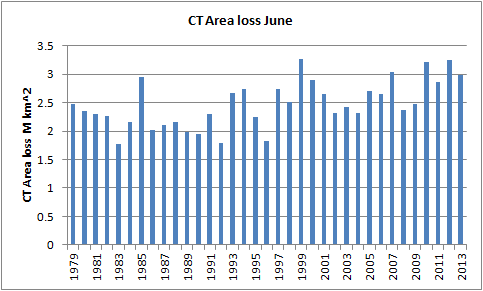 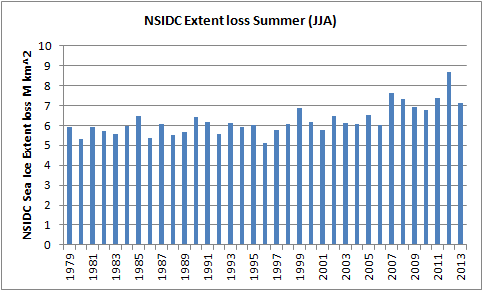 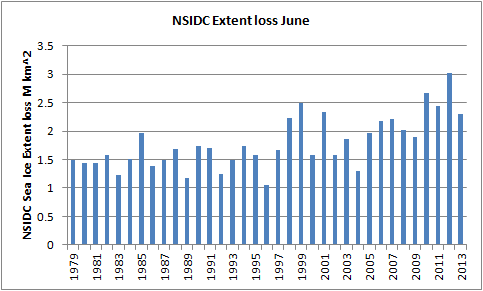 So despite sea ice extent/area suggesting ice conditions are like 2009, the June behaviour suggests not, this is probably because first year ice is flat and ice more able to form large expanses of melt ponds leading to more rapid drops in June.

The indices of sea ice area and extent show what is known as a 'one year lag negative autocorrelation', in plain english this means 'a new record doesn't tend to follow a record'. In the CT Area dataset this tendency (it's not a hard rule) was broken in 2011 and 2012, this year it seems to have been supported. The actual 1 year lag autocorrelations are -0.524 for CT Area and -0.564 for NSIDC Extent.

But it can be seen in scatterplot trends for the two series, detrended by differencing, using 31 August area/extent. 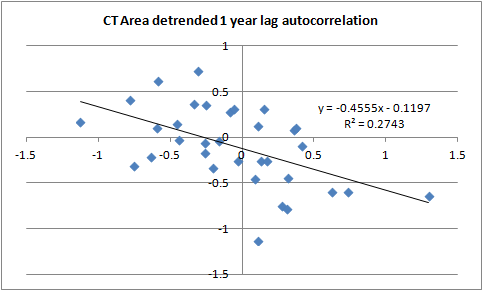 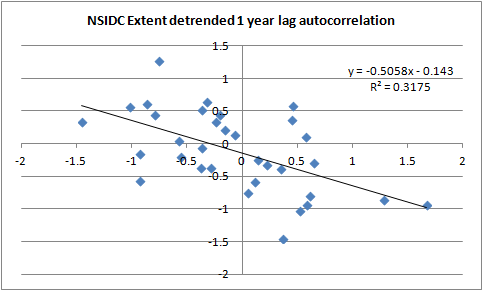 So if much of the area/extent increase of 2013 comes from before June, what of the winter and early spring conditions preceding the 2013 melt season?

To look at this we must leave indices of area/extent aside and turn to volume, because before June the ice edge is outside the Arctic Ocean so contains little information about conditions within the Arctic Ocean which play a role in the summer melt. The following table is for PIOMAS volume on the days and years shown with 'delta' being the difference between 2012 and 2013.


By the end of March volume in 2013 was lagging 2012, but by such a small degree that the total volumes were virtually identical. By 30 April 2013 had a lower volume than 2012 to a more significant degree. However by 31 May 2013 had higher volume than 2012, this increased by 30 June. As argued here, this behaviour seems to be explained by colder temperatures through May than in recent years leading to a muted spring melt.

I'm still working on the role of the atmosphere, but most of the increase in summer losses in area/extent is actually occurring in June, and there is negligible relationship between June sea level pressure (SLP) and losses of CT Area during June. 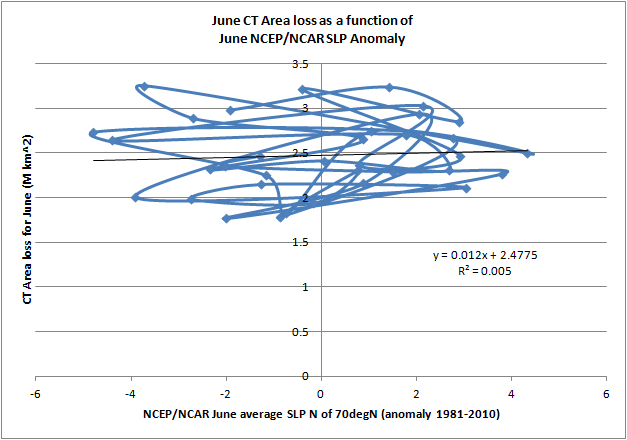 This is in addition to the late summer showing smaller trends of loss. So I am now rather doubtful about the role of the Arctic Dipole in the post 2007 behaviour of the ice, and am tending towards seeing ice dynamics as a much bigger driver than I had suspected. I will post more on this but need to do more work.

One important caveat to note here is that referring to the first two anomaly graphs of this post shows that in both CT Area and NSIDC Extent seem to have a downward tending anomaly slope in the late summer, the absence of this in 2013 may be demonstrating the role of the Arctic Dipole. This is especially relevant to the apparent accuracy of my CT Area prediction: Around 16th July there was a second cliff of the season, this was truncated by the appearance of cold weather about ten days later. This seems to me to be suggestive of what may have happened with an Arctic Dipole and warmer temperatures in late summer: The anomalies could have continued to drop as they did in 2012, due to faster than usual melt rates.

Throughout the season it has been tempting to view cooler temperatures as causing reduced melt, but less sea ice (meaning more open water) may be what is driving temperatures upwards, and more ice this year may have suppressed temperatures. Despite the lack of relationship between SLP and June loss shown above, there is a relationship between temperature and June loss, but this may be caused by sea ice loss, not causing sea ice loss. Again this is an issue I am looking into. 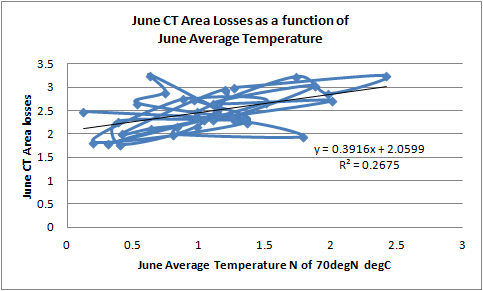 So given the argument with regards the 'negative one year lag autocorrelation' it may be tempting to see 2013's melt season as a case of rebound following a record minimum with the same process at work that has been at work in past years. Pinning down a reason for the negative autocorrelation is not easy, but perhaps a major reason is rapid ice growth following years of reduced sea ice.

Both the total volume numbers of PIOMAS and the detail of the thickness distributions do not suggest this was the case for 2013. 2013's total volume was about equal to 2012 at the end of March, and March thickness distribution was thinner. So by this point in late winter growth of ice had not overshot 2012 at the same time, implying we are not below equilibrium as in 2007. The following shows March volumes accounted for by ice of various thickness, thickness bands in metres along the bottom row.

Looking back to 2007 as a record followed by a rebound we see a clear rebound of volume, both in terms of total volume and in terms of contributions from ice over and under 2m thick. 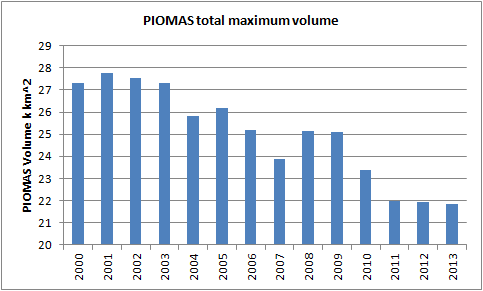 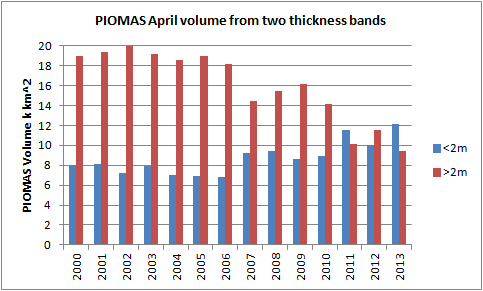 This behaviour is indicative of a thermodynamic rebound when a record low has driven the ice below equilibrium state. It has clearly not happened this year, what happened this year was after April, and followed the autumn/winter ice growth rebound, it was not caused by it. So whilst we will probably see an increase in contribution from ice over 2m thick by early winter, this will be due to the persistence of thicker ice through the summer of 2013, caused by weather, not due to a thermodynamic rebound.

2013's melt season has actually turned out to be a more exciting and useful year than the further crash I'd been expecting when posting earlier this year. Now we have a 'control' year to use in examining the roles of atmosphere and changes in sea ice in the post 2010 environment. But it doesn't change my view of the process, the ice is on a trajectory to a seasonally sea ice free state.

Great post Chris, I think an update for minimum volume won't be necessary. The two last graphs contain a typo : volume in in km^3 not km^2.

I think it's interesting that volume seems almost independent of area, given the last three years. And even with a cold, cloudy arctic summer the MYI volume decreased significantly, that must almost mean that melt form the bottom is fierce.

Thanks for catching the typos, something always gets through. ;)

Beware that none of what I post tells us anything about MYI volume this summer. PIOMAS gridded thickness data hasn't been released over the summer. The two PIOMAS based plots are for the spring - April to be precise.

There is a relationship between area and volume approaching minimum for CT Area and PIOMAS volume. For the date of minimum for both series volume is related to area by the following equation (power trend applied to scatter plot, R2 of 0.93).

In other words CT Area is about 1.3 times the square root of volume.

For monthly averages September is:

I've yet to get round to working this out for NSIDC Extent.