I should be cracking on trying to get to grips with the atmosphere, but it's proving as difficult as I'd feared. So I've given up for the moment, dug out my debit card, and hit Amazon. The only thing I've purchased that's germane to this blog is Hansen's Storms of My Grandchildren, in which Hansen refers to a 1981 paper: Climate Impact of Increasing Atmospheric Carbon Dioxide. Scanned PDF here.


I often find old papers take me back into a world I tend to easily forget, before the ominous and (it seems to me) premature impacts of AGW that we're seeing. Hansen's reference to that paper throws a stark light upon recent years in the Arctic, towards the end of that paper the authors note:


Floating polar ice responds rapidly to climate change. The 5 to 10 degC warming expected at high northern latitudes for doubled CO2 should open the Northwest and Northeast passages along the borders of the American and Eurasian continents. Preliminary experiments with sea ice models suggest that all the sea ice may melt in summer but part of it would refreeze in winter. Even a partially ice-free Arctic will modify neighbouring continental climates.

Published at the end of the 1981 sea ice melt season on 28 August the above statement from the paper is worth contrasting with plots of 1 September ice extent from Cryosphere Today. 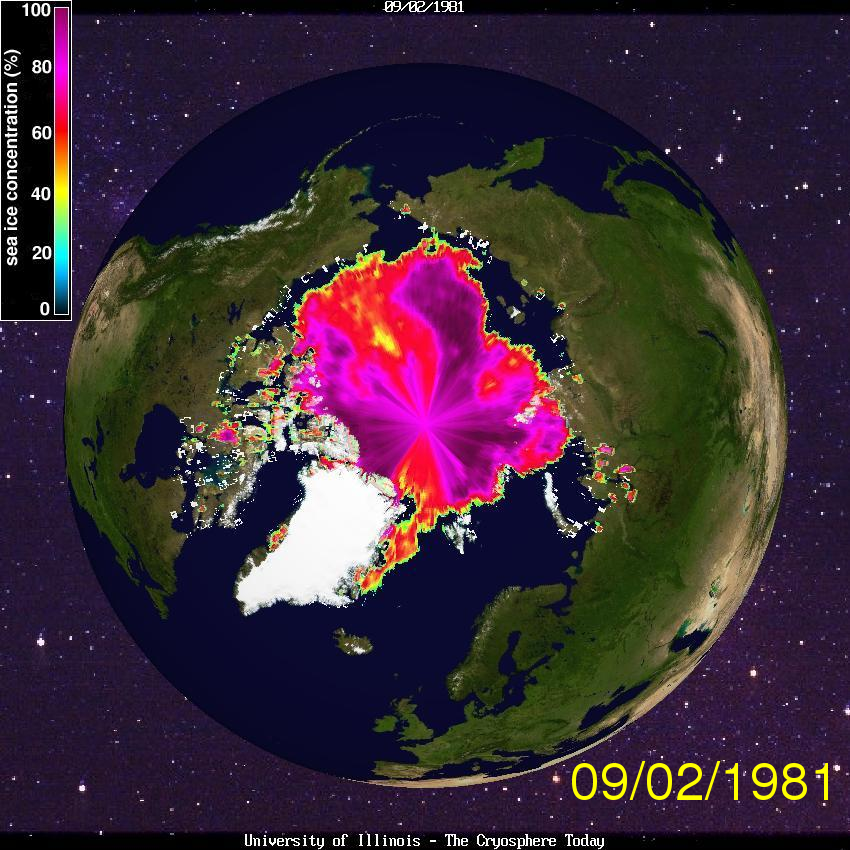 Compare that to last year on the same day. 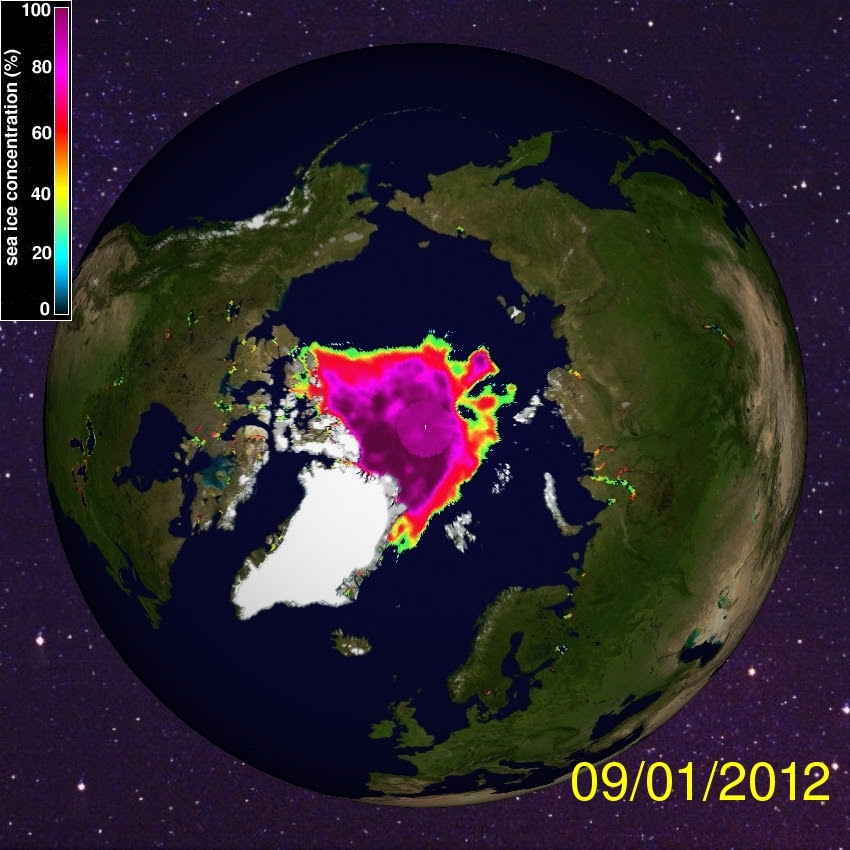 And even this year's so-called recovery pales before the extent of ice in 1981. 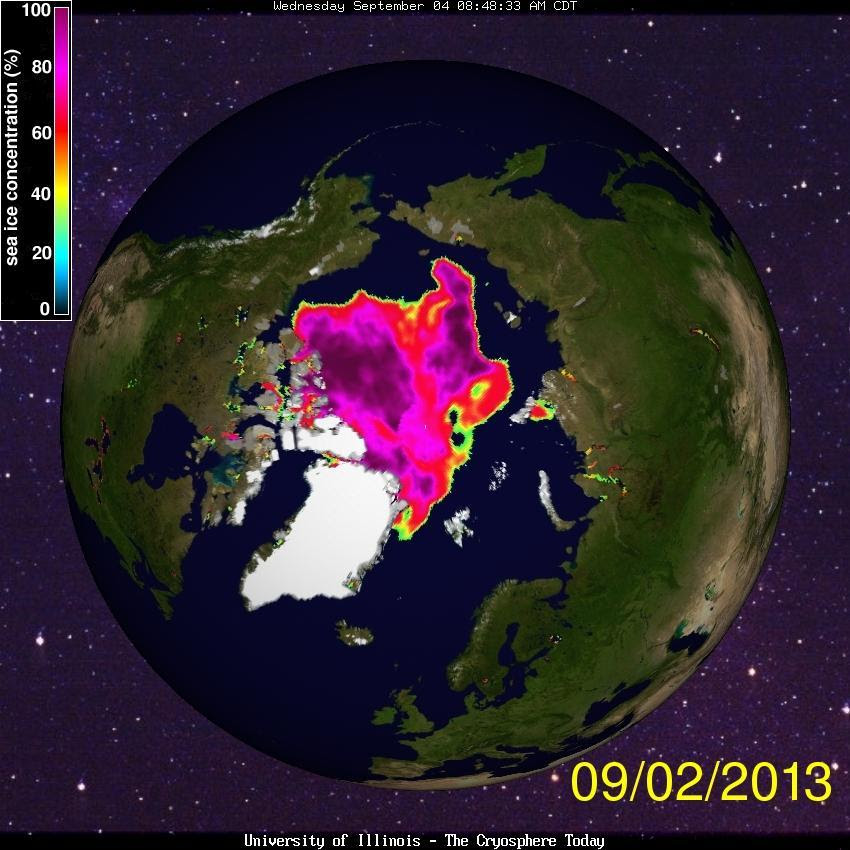 Long before CO2 doubling and the full force of Arctic Amplification the Northwest and Northeast passages have both been open over the last few years, and even in this year of 'recovery' the Northeast passage has been open to navigation, e.g. FT.com. I've previously blogged extensively on summer and winter mid latitude atmospheric impacts of decreasing sea ice, e.g. here, and here. And aside from the Arctic the climate dice are already loaded by AGW, as discussed here. I could go on, but to go over what's already known is tedious.

Given the denialist backlash against the IPCC Fifth Assessment report, including their total misunderstanding of the recent hiatus in global warming and this year's Arctic sea ice conditions, I've seen the question being asked: What will it take to wake people up and drive humanity to effective action on CO2 emissions?

When I step back from following specific lines of study, as I have done in the last few weeks of watching DVDs and reading books unrelated to my primary hobby, and especially when I see an entire panel of 'meejah pundits' agree with the presenter on Sky News that the Daily Mail has shown the scientists wrong with regards anthropogenic global warming, I think the answer is pretty clear. The warnings are decades old, the science gets stronger each year, yet the bulk of humanity continues with 'plan A', and takes shelter in the flimsy whitewash of the denialists, and greenwash of the governments. This is an intelligence test that humanity is in the process of losing.

That doesn't mean I'm likely to stop blogging or studying, I'm not going to miss something so exciting and awesome and I've got too many loose ends to tie up: Will we see a long or short tail in Arctic sea ice? How long will the 2013 uptick in volume persist, and what will this tell us about the time constants involved, e.g. the Beaufort flywheel? To what degree is the summer pattern a modification of the Arctic Oscillation? Can Cohen's Wave Activity Flux be used to shed light on the development of the summer pattern and Greenland ridging? Is there a connection between eastern Eurasian spring snow line retreat and the Greenland summer ridging? Why was 2013 so different from the other post 2007 years? How does the CET series show impacts due to Arctic sea ice, does this factor fully explain the lack of warming in CET over recent years? NH Blocking shows a shift post 2003 - how is this related to Zhang's finding that the AD emerges to dominance after about 2003? How much of a role in the greater seasonal cycle post 2007 do the AD and thinner ice each play? That's just what's running through my head most days.
Posted by Chris Reynolds at 13:01