The Beaufort Break Up of February 2013

Over the last week there has been a large fracturing event in the Beaufort Sea, the aftermath of this event continues to unfold. This is being discussed at Neven's Sea Ice Blog, and at the new Arctic Sea Ice Forum. In this post I summarise my understanding which has been posted on those sites in a piecemeal fashion.

On 20 February 2013 a large fracture opened up in the Beaufort Sea. This was visible not only on Infra-Red (IR) satellite, but also in ASCAT scatterometer images. This fracture was due to a wholesale clockwise movement of the pack, advancing ice into the Atlantic sector and opening coastal flaw leads along the Siberian coast. Such large scale movements of the ice are not exceptional, when I used to follow QuikScat and make slideshows of it to examine pack activity I regularly came across such large shifts, often associated with shifts from low to high (or vice versa) Arctic Oscillation index.

In this image it is also possible to see the remaining multi-year ice (MYI) as a white region off the north coast of Canada and Greenland. As I will show, the location of this is significant to what happened during the fracturing.

I've produced a more detailed view of this arc fracturing in my Google Docs account (I'll be using that facility in the future, very good for large images). That's a series of adjacent images (250metres/pixcel) from MODIS Arctic Mosaic, (26 February 2013) put together with some annotations. The main thing that's worth seeing is the scale, as the inset shows the longest line is the same distance as between London and Edinburgh (~540km).

After 19 February a high pressure system established over the central Arctic, by 24 February this was sitting between two low pressures and establishing a net air flow that drove the clockwise rotation of the ice.

I paused the above image on 24 February to show the high between lows. This is a striking feature, but to the best of my knowledge it is not highly abnormal. However it does seem to me to explain the movement of the whole of the pack.

As mentioned above, ASCAT shows multi year ice, this enables a further feature of the event to be appreciated. I've overlaid a satellite IR and ASCAT image on top of each other to demonstrate an aspect of the mechanics of the event. After overlaying I marked out the region of MYI shown in ASCAT in red, so in the following satellite IR image the red region is roughly the region of MYI. 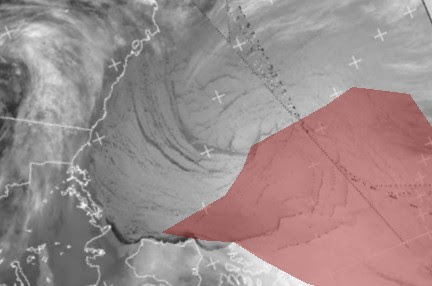 Here it is apparent that the parallel arc fractures cease around the region of MYI where the angle of shear changes. Indeed from the middle column of crosses, third cross up, it seems arguable that the largest fracture deviates and then follows the FYI/MYI boundary. What has happened is that as the entire pack has shifted clockwise this has placed the Beaufort Sea under tension, and the ice has failed, that failure being bounded by the Alaskan coast (upper left), Banks Island and the Canadian coast (lower left), and the region of MYI (centre). This mode of failure is the same mode seen by collapse of sea ice within channels in the Canadian Arctic Archipelago as the Northwest Passage has cleared to open water in recent years. The arcs are a result of the physical enclosure between land and MYI. 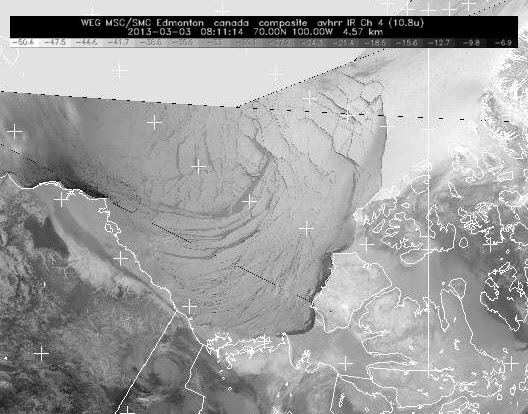 Whilst the initial arc fracturing has now completed this is leading to secondary fracturing that is reaching into the MYI region. This is seen in the previous graphic, but comparing the two, which are separated by about 48 hours shows that the region bounded by the most poleward (right side) fracture has become more fragmented. Whether the region of disrupted ice will progress further into the MYI area and towards the pole, I do not know. This event may not have fully played out. However it is only for the initial arc fracturing that I think a reasonable case can be made for it being abnormal. The wider fracturing above, and that preceding the arc fracture event proceeding from 20 February, may not be so unusual.

Others have been following fractures in Beaufort for some time, however I wasn't convinced that these fractures were unusual. Due to a burglary I lost my previous stockpile of satellite images, however DMI provided images from years back for the same locations around Greenland. So in a previous post I used that location and provided four images, the question being - could people identify the images from 2013? I asked this because I wasn't convinced that I could justify why the image I knew to be from 2013 was from that year. The results seemed to bear out my suspicion, of those who replied the ones who got the correct year had been following the DMI maps and despite rotation and mirroring the images recognised the pattern. Other replies indicated people found it a hard one to call.

I've recently come across an article from 2008 which describes a fracturing event in Beaufort which was as big as the event of this February. However in December the ice is much thinner than in February, consider for example the following two images from HYCOM, the US Navy's sea ice model: 31 December 2013, 27 February 2013. The difference here is extreme due to large open water in Beaufort at the end of last year, but even older ice containing a lot of thinner ice at the end of the melt season will thicken thermodynamically in the cold of winter.

What were conditions like in December 2007 / January 2008? The Drift Age Model plots from Fowler, Maslanik and Tschudi shows that at this time Beaufort contained a lot of MYI, although this was probably rather dispersed, here. What 2007/8 and 2013 did have in common was a preceding substantial new record.

However it was not this cracking per se that I consider unusual, I still am not convinced a good case has been made for it being unusual. In my previous post I described how I first ascertained that the large arc fractures were visible in an ASCAT image the same size as the QuikScat images I'd located. Then I went through winter in the QuikScat and ASCAT images looking for arc fractures of the sort that occurred in late February. I was unable to find images of similar fracturing.

So what I consider to be unusual are the massive arc fractures that opened up after 20 February 2013.

What does it mean?

This doesn't mean all of this ice will melt out now, the melt season hasn't started as temperatures in the area are still around -30degC, Weather Central (German). Indeed this is shown in the image I linked to at Google Docs, where striations are visible in new ice within the fractures showing that as the fractures have opened the ocean has immediately frozen. However this new ice will not have the chance to thicken as much as the existing ice before the melt starts. So ice in Beaufort will contain regions of very thin ice which will melt out and may mean more open water later in the melt season. This is significant because areas of open water within the pack cause solar driven warming, within the pack. However this isn't the major factor that I expect will dominate this season.

In a previous post I outlined the current state of the ice in the context of two models (PIOMAS and DAM) and ASCAT, the exceptional nature of this state is supported by longer term examination of these three sources. There is now a staggering amount of FYI in the ice pack, indeed the pack is clearly a predominantly FYI pack. I explained above how I see the arc fractures as being constrained by land and the MYI region. In my opinion this is telling us how thin the ice in Beaufort is, much less mechanically strong than the adjoining region of MYI, such that under forces that don't seem to be unusual the ice opened up a large series of arc fractures.

I suspect that over the expanse of FYI shown by PIOMAS, DAM, and ASCAT the thickness distribution probably peaks at 2m. As the arc fracturing shows, this is mechanically weak, but more than that this first year ice will absorb almost 1/3 more solar energy throughout the season than the MYI it has replaced, ref. However add in the inclusion of thin new ice between floes, and the open ocean that will expose, and we have the recipe for another record year. 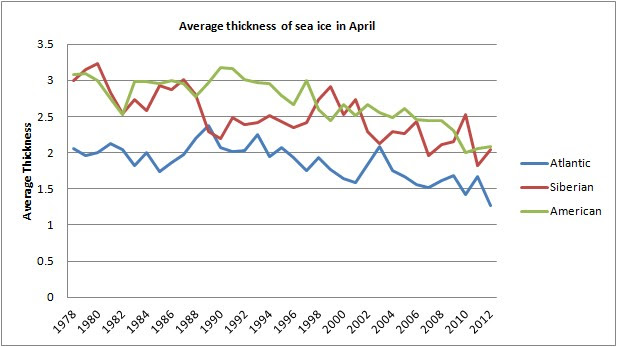 In the Siberian sector outlined in my previous post on Open Water Formation Efficiency I calculated April thickness from PIOMAS gridded data. The Siberian sector is significant because it's the region that has become increasingly dominated by FYI, i.e. it has been typical of what most of the pack is like now. In previous years Beaufort has started the melt season with a substantial fraction of MYI, it starts this season with fragmented FYI.

The Siberian sector has also shown a marked increase in seasonal thinning, whilst the Arctic Dipole and ocean warming may play a role, I suspect that the greatest factor is the increase in melt season albedo as the pack transitions from MYI to FYI. 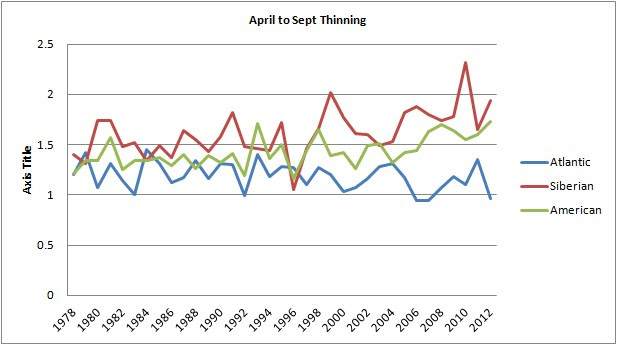 With thinning between April and September being close to April thickness, giving large open water formation in the Siberian Sector, 85% open water in September 2012. However average PIOMAS volume for January 2013 is 6.8% below that of January 2012, which if applied straight to a ~2m thickness implies over 10 cm thinner, assuming that volume deficit is maintained to April. Comparing the Siberian sector for the above two graphs shows that 10cm is a significant factor. And now most of the pack is FYI like the Siberian sector, with thermodynamics setting the thickness gained over winter, and loss over the summer, these thermodynamics apply equally to FYI in all regions of the pack.

So whilst this fracturing will have an impact of some sort in the summer, sea ice integrates any impact upon it, I expect the main impact will be the predominance of FYI and consequence for albedo as we enter this year's melt season.


In closing here's one loose end, it's worth noting that in the HYCOM forecast these arc fractures aren't visible, but a single large Polynia has formed showing the difficulties involved in modelling ice down to the scales where the relevant physics happen. The ice in HYCOM seems to be rather more strong under tension than the real ice is.
Posted by Chris Reynolds at 03:53

Chris, excellent summary, surprising details. Would you get so keen to place an educated guess how much (km²) ice has been displaced into warm Atlantic waters by opened cracks?

Tricky, if we had the numbers instead of graphs for the CT areas it would be possible, but having been over the graphs they're not detailed enough. However Barents does show an increase around this time. Check out the second of the two following graphics.

Day 50 to day 63 of ASCAT, showing bulk movement of the ice.