Anyway, the lead in question is visible here. It's been commented on at Neven's Sea Ice Blog, and at the new Arctic Sea Ice Forum. The lead itself is now visible in ASCAT, here image shown below. 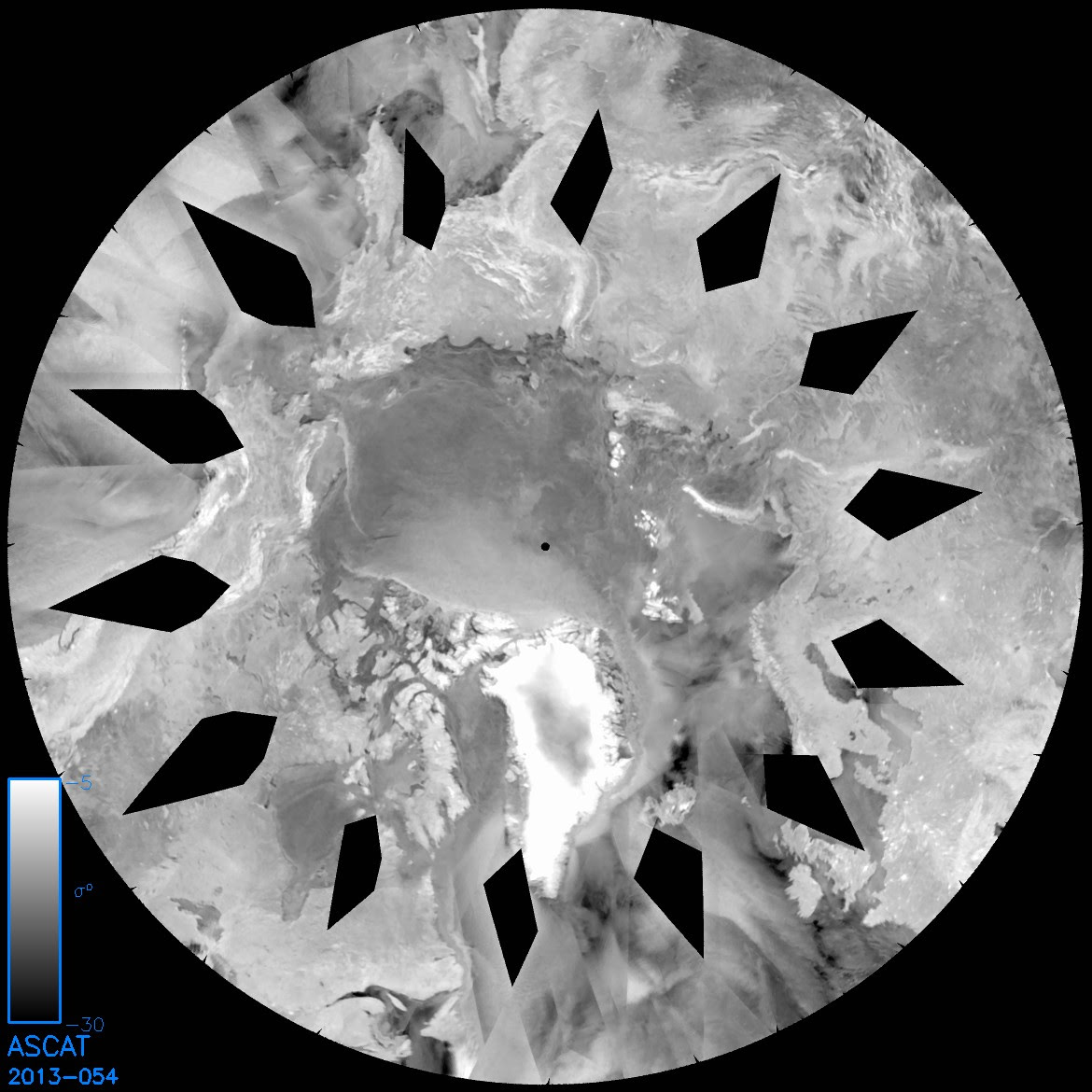 The lead itself can be seen left of the north pole progressing down from the Bering Strait. From this image it is apparent that it is accompanied by a lead along the coast of the Candian Arctic Archipelago (CAA). However the opening of the Beaufort lead does not seem to be related to the CAA lead as that does not change as the Beaufort lead opens (slide show from day 46 to day 54). ASCAT only goes back to 2010, looking at these images from days 1 to 100 and 300 to 360 in 5 day intervals I am unable to find a similar feature in any part of the Arctic. In doing this I have excluded coastal leads such as the CAA coastal lead shown above.

QuikScat goes back to 1999, I've used the same period as for ASCAT (days 1 to 100 and 300 to 360 in 5 day intervals) and again have not considered coastal flaw leads to be features similar to the current Beaufort lead.

Despite using the same basic approach QuikScat is different from ASCAT, so are leads visible in QuikScat? Yes, the following image shows a coastal lead off Siberia (2006 day 64).

However it is not clear whether such cracks are actually leads with open water or simply divergences within the multi-year ice (divergences would imply open water leading to first year ice cover during their formation). Either way these are far less obvious features than the current lead in Beaufort.

There is however similar activity in Beaufort/Chuckchi, this image (2008 day 330) shows such a feature.

These are common in this area due to the Beaufort Gyre and movement around the Bering Strait. But this is the most similar event to the current Beaufort Lead, and it is clearly not as large.

So the current Beaufort sea ice lead is very unusual in the context of sea ice this century as seen by scatterometer radar on the QuikScat and ASCAT satellite scatterometers.

The first box is ticked, this is an unusual event, but what is the cause, and is it exceptional?

There seem to be two competing issues here - highly unusual ice conditions and/or highly unusual weather conditions.  Here is the most recent NCEP/NCAR sea level pressure plot for 21 February 2013, as the lead was opening.

The resultant wind fields are shown in an image from Artful Dodger at the Sea Ice forum, reply #7 here. And it is seen that a sharp spatial change in wind direction over the pack seems to be the cause of the divergence that is causing the Beaufort lead. Neither the pressure fields from NCEP/NCAR, their intensity, or the resultant wind, seem exceptional to me. The shift between the high pressure centre over the pack and the low over the Aleutians is pretty big, but I don't see anything so weird it could solely explain an event that seems to have no precedence since 1999.

So we have a mid-pack lead that is larger than any seen in the last 13 years, caused by weather that seems not to be a one in 13 years event. Which leads me to agree with anyone claiming that this is;
a) very unusual, and
b) probably primarily a consequence of abnormally thin ice rather than abnormal weather.

However I still prefer to rely on more direct data and assimilating model data (e.g. here) when shaping my expectation (here) that we're in for a very exciting sea ice season.
Posted by Chris Reynolds at 10:08

Great post; Douglas Adams had such a terrific way of writing about frustrating situations with humor. One of my other favorites was "Last Chance to See," in which he wrote about human folly regarding the animal world; I wonder what he would have had to say about the Arctic. That being said, I agree that this lead situation appears to be exceptional, and thank you for your research that bolsters that opinion.

Yes, thanks for thoroughly looking into this, Chris. I know how difficult it is to make sense of these occurrences during winter (which I often don't even bother), so hat off to you.

Given the cold over that part of the Arctic, do you think this will make that part of the ice pack stronger? Or will the thin ice in those cracks melt out earlier and thus attack the pack from the inside out?

I often think that the whole AGW issue only makes sense when viewed through the type of humour Adams expressed so well in Hitchhiker's Guide. Which is probably why that quoted passage came to mind immediately when I had such trouble finding the data.

I often don't bother during winter. Issues like the winter area maximum aren't of much interest to me because they don't tell us much about conditions inside the Arctic Ocean, which are key to the minimum. Volume is of course different.

The ice that forms in the cracks won't have time to seriously thicken. Whether it will play any prominent role in the coming melt season, I don't know.

I suspect that melt season response to the overall poor state of the pack will dwarf any contribution from the current leads/cracks fissures, whatever people want to call them.

Chris, for any future such U.S. data location/status issues, you can save yourself time by emailing Bob Grumbine (bobg@radix.net, although he may prefer his easily searchable work email for these purposes), a sea ice expert who conveniently maintains some of the relevant data himself.