PIOMAS Data are now out so it's time for my February Status post. I hadn't intended to do these each month, but in light of the recent fracturing and the imminence of the Spring melt I've decided to keep with it until September at least. The pressures of overtime however mean this one's a bit shallow and bitty.

Someone called Dave C is now drawing the sort of flak I used to attract over at Neven's Sea Ice blog - flak? Ah yes I remember it well ;) . He's pointed out that after large volume gains from the minimum until maximum, or in this case March 1st (the date the new PIOMAS data runs to), following years don't have new records. This is really a restatement of the 'negative one year lagged autocorrelation' issue with sea ice extent, but in terms of volume. He is correct. Statistically speaking, after detrending by differencing, taking the gains from the previous year's minimum to each year's March 1st and correlating against the current year's minimum gives a correlation of 0.511 (statistically significant to 99.5%) for the whole period 1980 to 2012. Doing the same for the post 2007 years gives 0.811 (statistically significant to 95%).

However Dave then goes on to argue for a recovery this year, so as not to misrepresent him I stress that he doesn't seem to be talking about a recovery like the denialists so are so desperate for, merely an uptick to a little over 2012's record. I disagree with this for the reasons I gave in January's status post. I also note that since the 2010 volume loss every year has shown a drop on the previous year's volume minimum, in fact since 2001 every year has been a year on year drop apart from 2007 2008. 2012 may have soundly beat 2007 but in the PIOMAS volume realm it is a slight event compared to both 2010 and 2007. 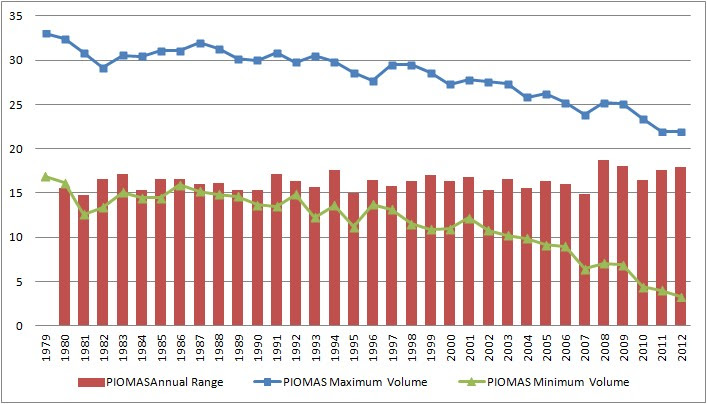 EDIT - I've just updated this graphic with the correct one - all indices on the same axis.

In the previous post where I stated my reasons for accepting that we're on the fast track to a seasonally sea ice free Arctic Ocean I made a number of predictions. Number 1 was correct the refreeze was fast and there wasn't delayed open water as in 2007. Number 2 wasn't; I didn't expect last year's volume loss to be closed with respect to 2011 and 2012. It has been as the PIOMAS volume anomalies show. Number three looks like a bad bet as well, while February to April post 2010 have been unusually warm with a low level pattern in the atmosphere over the Arctic, this year so far has been very cold, so that's looking like another fail. However as with the previous (number 2) that was little more than a hunch/WAG, unlike number one. 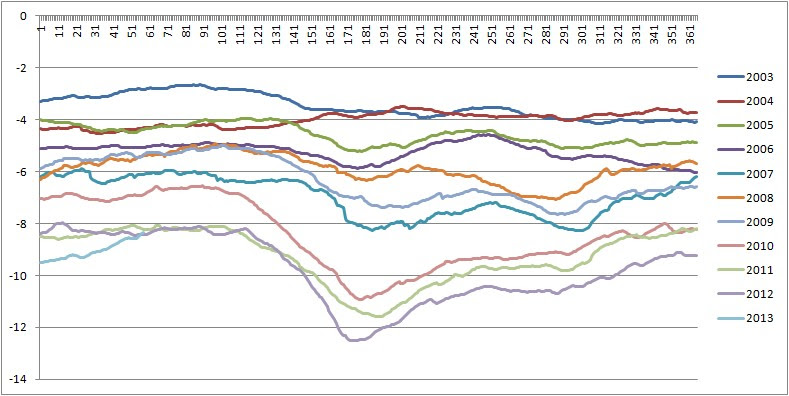 The curious issue is where this volume gain is occurring because both the PIOMAS team thickness and calculated thickness (PIOMAS Vol / CT Area) don't show 2013 catching up on 2011 and 2012, as does volume itself. 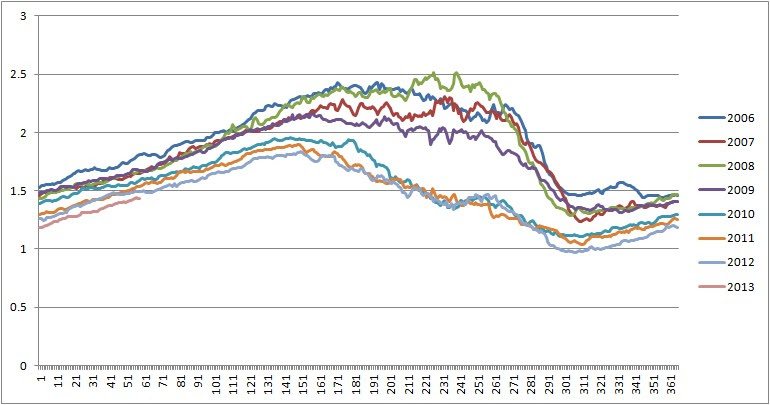 This suggests to me that the gain in volume is due to lateral ice growth, not thickening. Which is significant, because it seems to suggest that the ice hasn't thickened so as to gain on the previous two years. This is to be expected given the state of the ice as shown by PIOMAS, DAM and ASCAT in December, outlined here. The loss of so much multi year ice will bring down average thickness.

The Beaufort Break up discussed in my last post continues, contrary to my expectations it has now spread to the bulk of the remaining multi year ice (MYI) off the Canadian Arctic Archipelago (CAA). I'm still waiting for a decent pass of the satellite to get one for today, but here's a slideshow of the 3rd to 11th March, it's missing the 10th because I was having a day off watching films - and that's when the massive spread of cracks happened. In going over the previous QuikScat images I don't recall seeing large cracks in MYI as are now apparent in ASCAT, but I'm not about to spend another day making sure, so I'll just say I don't know how unusual it is, and I don't know what impact it will have on the melt season.
Posted by Chris Reynolds at 14:01

The pressures of overtime however mean this one's a bit shallow and bitty.

>"I also note that since the 2010 volume loss every year has shown a drop on the previous year's volume minimum, in fact since 2001 every year has been a year on year drop apart from 2007."

Crandles, Thanks for catching that. Should indeed be 2008.