Once is happenstance.
Twice is coincidence.
Three times is enemy action.

The latest PIOMAS volume figures are in, what they show is what I have expected and backs up what I'm claiming about a significant change to PIOMAS's behaviour. However despite it not being the end of the season we can still see that for 3 years in succession PIOMAS has been behaving 'oddly'.

Rather than show PIOMAS absolute volume, which is dominated by the seasonal cycle I think it's best to use anomaly. This is calculated by first obtaining the average for a long period for each day in the year, I use 1980 to 1999 so as to better contrast the recent massive losses. Then the anomaly figure is calculated by subtracting the long term average volume for each day from the volume for each day and year. This method highlights the changes from the average annual cycle. The following graph is anomaly for the last ten years. 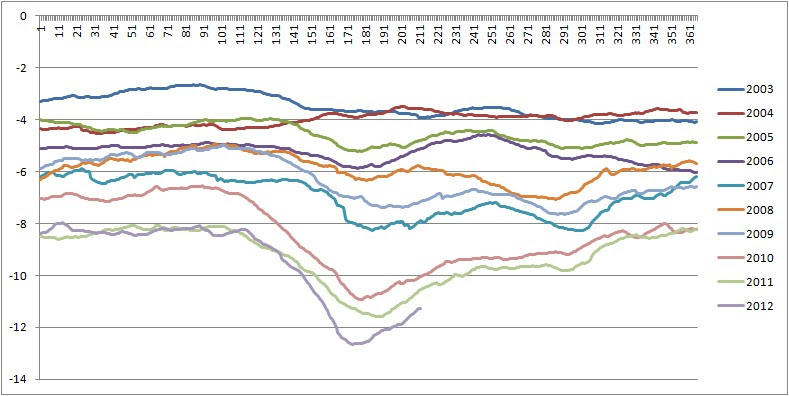 The last 3 years anomalies stand out from all previous years since 1979, when the PIOMAS volume series starts. All three years are typified by a massive Spring deviation from the long term annual cycle, 2012 has been the greatest such deviation. As time moves on into the closing part of the melt season the anomalies reduce, this does not imply an increase in volume, just that the deviation from the long term average reduces.

I've previously posted about features of the 'calculated thickness' that I term the Porch and the Roof. From now on only the Roof really matters as I've stopped using extent and switched exclusively to using area. Calculated thickness is a term I've coined for the thickness obtained by dividing the PIOMAS volume by Cryosphere Today's (CT) area, you'll find links to the PIOMAS and CT data at the end of the post. This is a specific metric, whilst it has a relationship to modelled thickness, I don't think the two should be confused.

In previous decades the Summer period has shown little decrease in thickness, giving the graphical impression of a flat roof, however as the ice has lost volume the decadally averaged calculated thickness has shown a tendency towards decrease during the Summer. The two most recent years, 2010 and 2011, have however not shown this behaviour termed the Roof. Now we know that 2012 is following their precedent. The following graphic shows the full series of calculated thickness from 1979. As mentioned earlier you can ignore Extent Thickness, which is calculated from extent, the one to follow is Area Thickness, which is calculated thickness as referred to in this post.

From this the abnormal nature of the recent three melt seasons can be appreciated. Instead of a flattened top to the seasonal cycle the cycle maximum is a point.

The most recent years calculated thickness are shown in the graphic below, this shows the implied loss of thickness caused by the Summer volume loss being greater than that which can be accounted for by area change. 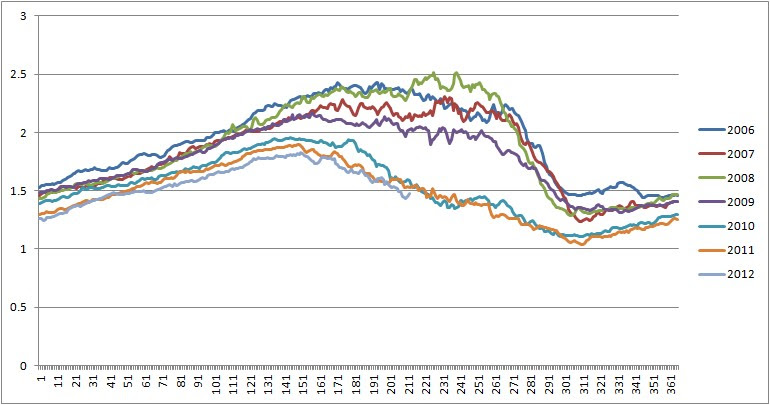 Note how this implies that around 1 September (day 244) the thickness loss is around half a meter.

Finally for completenes, as I posted it last month, here's the calculated thickness at the end of each month over the Summer. 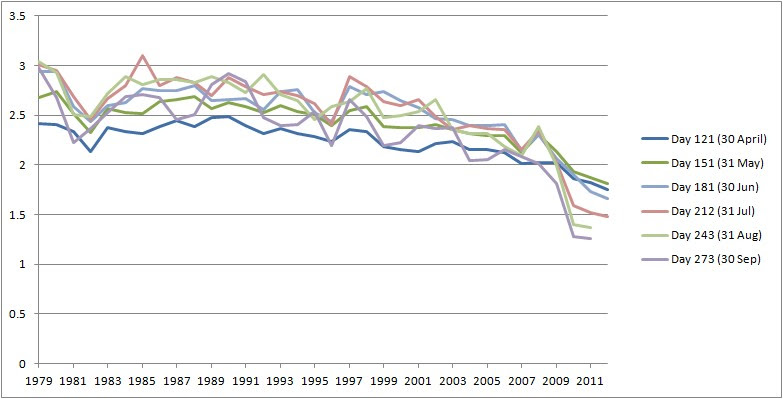 Figure 4, Calculated thickness for the end of each month over the melt season.

I had previously been of a like mind with Dr Schweiger of PIOMAS, In April over at RealClimate in the comments I wrote about these changes (ref). In reply Dr Schweiger suggested it might have been weather, now with a third year, random chance looks less likely as we have three years with very different weather factors. So I'm asserting that this is not just chance, three years, plus more information I've been made aware of, means I'm convinced that the loss of the Roof is an important event in the context of PIOMAS.

Later this month I'll be explaining why there has been this change in the behaviour of the ice pack as simulated by PIOMAS. The cause of the loss of the Roof has significant implications for the behaviour of the ice pack as we proceed further into this decade, if PIOMAS is correctly modelling what is happening in the real ice pack. Have we now seen the demise of the last vestiges of the old ice? Is 2011 and this year just a taster of the volatility we'll see in years to come?

PIOMAS Volume can be downloaded at the bottom of this page.
Posted by Chris Reynolds at 14:14

We may have to add a third housing term to the discussion soon - 'basement' - because all the ice-graph trends are headed down.