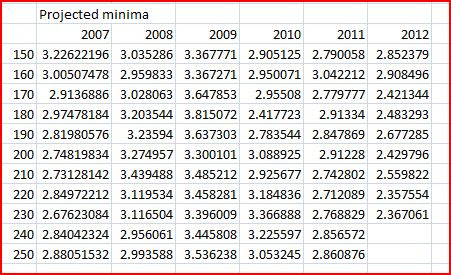 During the process of writing that post I realised that then taking the average of all ten day periods to date gave a better result with regards the 'hindcast' projections for previous years. The current 'hindcasts are:

It's clear that there's a generous error of about 0.1 M kmsq on these, even so 2012 still looks like a substantial record in comparison with the previous years, perhaps you could argue for 2.7 M kmsq, for 2012 but that's still a significant new record.

This work got me thinking about initial condition based projection, which is essentially what the method above is. But that method neglects current state in favour of the state across the season. So I've used the current date's area and continued forward with the daily area changes for years 2007 and 2011 from today. I've done this for the last 11 days.

It almost goes without saying that this method produces larger variations in the projected minimum for 2012 as time proceeds. But I've decided to persevere with it to see what happens. I've labelled the projections p2007 to p2011, and the following graph shows the projections based on data available today. 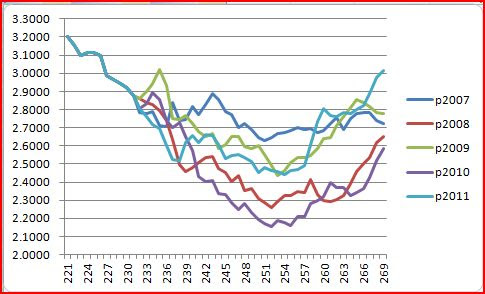 The large spread is apparent, overall the minima is between 2.1 M and 2.7 M kmsq, the projection from table 2, with previous year's errors allowed for falls squarely in this range however. So are we looking at a drop in the range of 2.1 to 2.7M kmsq? I suspect not.

I've previously stated elsewhere that CT's area for 2007 and 2011 shows a drop off of melt rate after day 236, that's four days from now on 24 August 2012. This inflection is apparent in the CT interactive plot of areas, a detail of which is shown below. 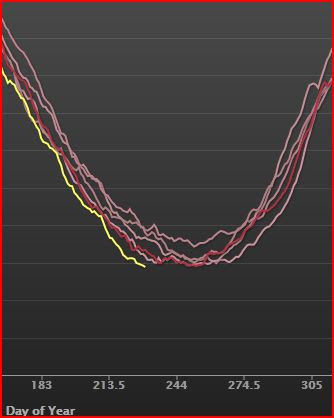 Figure 2. CT Interactive sea ice area plotter. Detail showing change in melt profile after day 236. Years 2007 onwards, 2007 and 2007 are the lowest complete curves, showing flattening at the base of the curve, 2012 is in yellow. Source.

Looking at Google Earth is informative about what's going on here. It has a gadget that allows you to plot day/night and cycle forwards and backwards. As late as 15 August the pole is in light 24 hours a day. But as time moves past the last week in August the pole is increasingly in twilight, implying that the Sun is skirting along the horizon. The image below shows sunlight/night demarcation on 24 August, but the effect is best appreciated in Google Earth by going back in time and advancing. 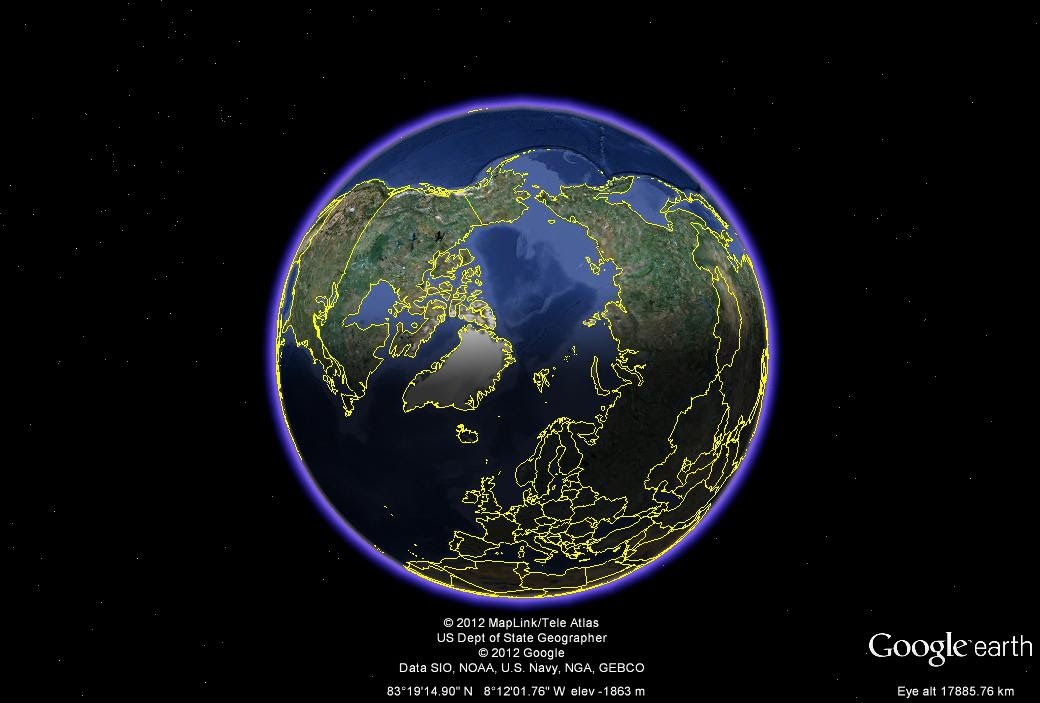 Due to the failure of AMSR-E last year there are two sets of images. AMSR-E are here, the temporary replacement system SSMIS images are here. Having followed them for some years it seems to me that generally once the ice edge has passed the 80degN parallel (the innermost circle is 85degN and they're in 5deg increments) the rate of loss slows, even where the inward advance of the ice edge has previously been fast. This has happened this year, as a consequence we see what looks like the start of a levelling in figure 3 above. This is despite ample heavily fractured and low concentration ice surrounding the pack. Similar ice state in 2011, combined with considerations of ocean heat and bottom melt might also have suggested a continuation of melt.

This is conjecture, but what if the rate of loss is being tempered as the ice edge enters the regions entering twilight? That late in the season and that far north, is the battle between solar driven heat gain, and heat loss to the atmosphere being lost? If it is what does this mean for the rest of the season?

Following this notion of mine I've taken the profiles of ice loss in 2007 and 2011 and used their progression after day 236 to continue 2012's loss after the most recent data, instead of taking them from the current date. This is what happens. 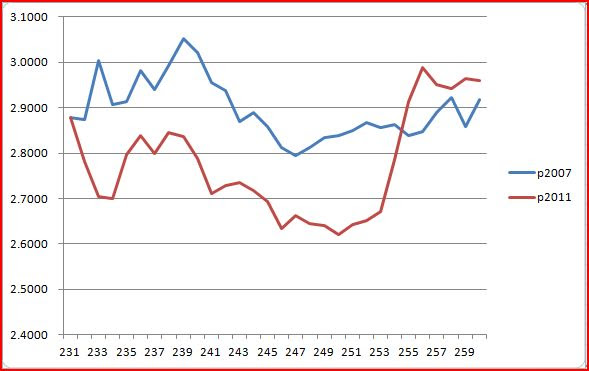 It's clear that the resultant minima are still records. However these records are in the regions of 2.8 M kmsq to 2.6 M kmsq, overlapping somewhat, but above the range of 2.1 M kmsq to 2.7 M kmsq previously obtained by adding previous year's melt profiles to current sea ice areas. I've used 24 August (day 236) as the earliest date, however as the above graph shows, had I delayed that for a few days the effect of raising the minima would have been even more pronounced due to the initial drop in 2011. In that case I could safely add 0.1M kmsq onto the lower minimum, taking it up to around 2.7, and arguably out of the upper range of the previous method.

2007 and 2011, despite being very different seasons, are the only years to cross the 3M kmsq mark, and both show reduction in melt rate in late August, leading to a floor. If 2012 joins them then it seems reasonable to me to conclude that it's likely that it will require the melt season to move earlier in order to make serious inroads into the area around the pole while insolation is still winning the battle over heat loss. This could cause an inflection in volume loss as the ice loss stalls in late September.

At present, approaching day 236, the CT area loss rate of 2012 is tapering off.. If I am correct in my guess, then this will continue and we'll see another year where the combination of late August and 3M kmsq put a stop to continued ice loss. But that won't stop a new record that's well outside any reasonable uncertainty figure for CT's area at this time of year. Whatever happens we win; we get more information to help us figure out what's going on.

The "fat arse" conjecture!! If that is the case, then we should see sooner and sooner drops below 3M, and later and later refreezes, until the volume above 85degrees is low enough for an area/extent crash.

Sooner drops below 3M would be a necessary condition. Above 85 deg N is around 1M kmsq in area. I'll be declaring 'virtually sea ice free' once we start having summers below 1M kmsq. That's as good as sea ice free.

Maslowski notes in his extrapolations that a residual of ice will probably remain at the end of the season.

Chris - nothing wrong with your logic. Perhaps the only caveat is that the ice keeps getting thinner. While in previous years it always stalled under these conditions, there was also thicker ice in the fortress.

It's really rather amazing to consider that we have decades of observations and data where 1 meter resolution was sufficient - now we need measurements in cm to distinguish 'old' ice from new ice.

That the ice keeps getting thinner is something I have in mind. I'm thinking about open water formation efficiency in terms of typical ice thinning through the season and the thickness implications of volume loss. This could present something of a shortcut to simply looking at earlier progression of melt in the season.

But before I get onto that I'm looking at the events of early 2010. Expect a detailed post on that by when the next PIOMAS figures are out.

I should have added - OWFE with thinning ice could imply far higher area/extent loss rates than we've seen in the record.