Further Down the Rabbit Hole

Over at Neven's Sea Ice Blog, in answering a question I had cause to note that the loss of sea ice area between 27 July and the minima had decreased since 2008. Normally I'd not pay too much attention to such small periods, but as the person who'd asked the question noted - I wondered if this was evidence of a negative feedback. If I seem somewhat vague here it's because I can't recall where the conversation occured or who it was with. Anyway I went on one of those enjoyable little trips that Excel and some data can lead me on.


Note that all areas in the following graphs are in million square kilometres. Sea Ice Area Data is from Cryosphere Today.

The obvious thing to do was to look at the data pivoting more than just the one break point, so I took ten day periods (day 150, day 160 etc) and looked at the area loss between maxima and the day in question, Day N, also between Day N and the minima. These graphs show what I came up with. 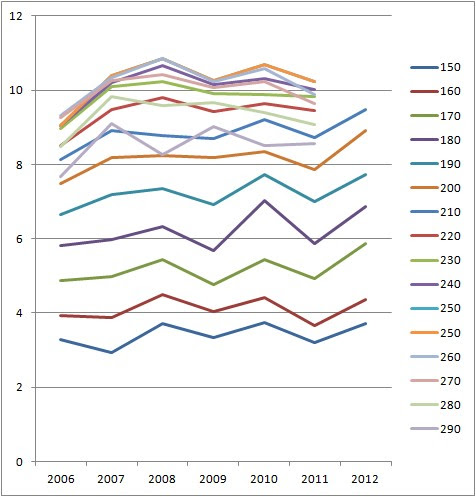 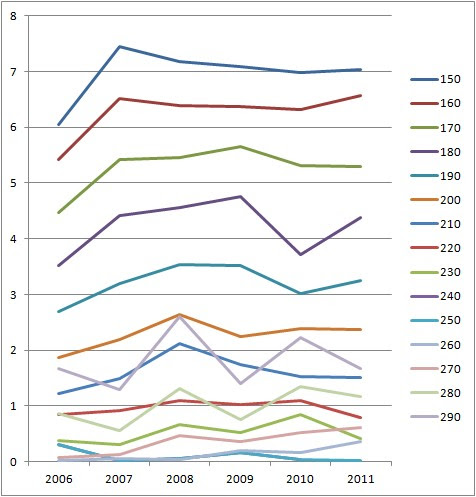 The time period is admitedly short, but what interests me is the post 2007 era - is there evidence of a late Summer reduction in area loss that could constitute a negative feedback?

In figure 1 from day 240 onwards (up the graph) there's a suggestion that the area loss between minima and Day N has increased - this could be due to earlier melt, i.e. areas that wouldn't have melted before day N in the pre-2007 regime melting before day N. In figure 2 for days earlier than day 210 2007 seems to have had an effect, possibly due to the extreme low area of that year. This might be supported in that 2011, too close to 2007 to say whether that record was beaten or not, also shows a consistent pattern of upticks later in the melt season.

However figure 2 does not support the idea that there is a negative feedback acting to reduce area loss in the late melt season. There is no consistent pattern of lesser loss in the late season in figure 2. It is only for around 27 July, day 208, that this appears to be the case. Once I'd got this far I very nearly left it at that, but a thought occurred to me: If the loss between Day N and minima was random without some underlying factor changing it, is it possible to use it to make a simple projection of the minimum this year?

Having a table of the area losses from Day N to minima I calculated the average loss for each Day N from 2007 to 2011. I specifically didn't use years before 2007 because of the clear and substantive impact the events of that year have had on the seasonal cycle. I then simply subtracted the average for each Day N to minima area loss from the area on Day N for each year and each Day N. This produced the following table: 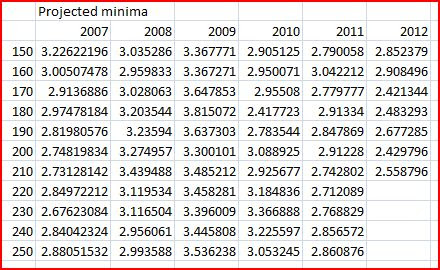 That table is the table of predicted minima using this method of prediction, how does it compare against the actual minima for each year? The actual area minima are:

The errors are tabled below, they are calculated as predicted minus actual minima, for each year. 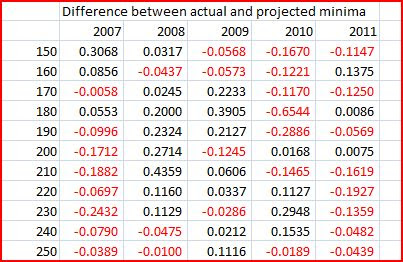 Table 2, Predicted minima minus actual minima, for each year's annual minimum and each value in table 1.

First it's worth noting that during each year there's a sigificant spread of predictions, which might make this method seem worthless. But before we throw the baby out with the bathwater...

Here is a histogram of table 2's error figures. 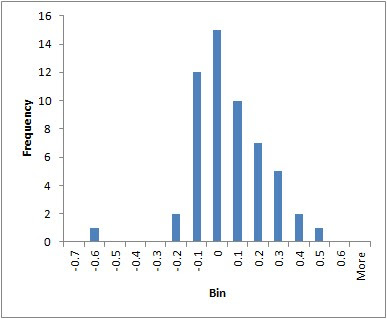 
This shows that for all the spread of predictions the errors are largely positive, with a large proportion of small negative errors. So the predictions apear conservative in the context I'm thinking of using them - looking at whether we're likely to have a record this year. Furthermore the bulk of the errors lie within +/- 0.2.

Finally here is a graph of the predictions. 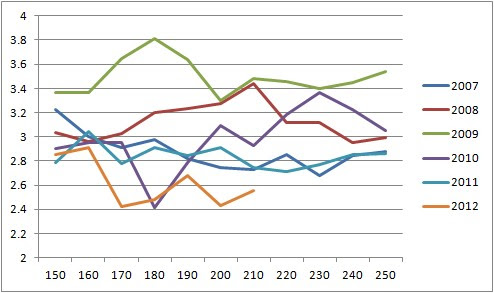 
I'm not sure I'd use this method for making an actual quantitative prediction of any year's minimum. What interests me is what it shows qualitatively and the questions it raises. (Actually see the PS at the end)

2007 and 2011 both record years show a consistent under-prediction of sea ice area from day 190 and day 2010 respectively. This suggests that in both those record years the loss was less than average after those dates. I'm wondering here if the lower insolation closer to the pole late in the season could have been acting as a break on melt in those seasons, as the ice receded closer into the central Arctic - so maybe there is some tentative evidence of a negative feedback after all?

This year is following similar lines to 2007 and 2011, although we don't yet know the minimum we have a long series of low predictions, which surely will result in an under-prediction and a string of negative errors. However there is a critical caveat this year. Neven's posted today about a new CAPIE record, this is due to the very low concentration area in the Chucki and East Siberian Sea's I've cited as a reason to expect a record this year. Early this week there is forecast to be a very intense low who's strongest winds look likely to disintegrate that area of low concentration ice. It is feasible that the current large drops in area will slow once the low concentration area melts out, which I expect to happen within 10 days.

In my recent post "Here We Go Again" I wrote a prediction for this year:


"My guesstimate is from 2.85 to 2.5 M km^2 at the daily minimum for Cryosphere Today's area metric, depending on what the weather brings. I do not think a figure above or close to 2.9M km^2 is plausible."

I'm still standing by that.

Apologies to anyone else who's posted a similar method elsewhere on the net - I've not seen what you've done, but this is so simple I presume you must be out there somewhere.

Just before posting this I thought I'd try averaging, both all the predictions for a single year from day 150 (whole), and predictions from days 150 to 210, to allow 2012 to be included. Here's what I've got.

The agreement is better than I thought it would be, but the end result for 2012 is still within my guesstimate range, so I'll leave it at that.

Some excellent animated graphs on sea ice over the years can be found at Open Mind;
http://tamino.wordpress.com/2012/08/03/arctic-sea-ice/

Hi Lazarus,
You've spent too long at the bottom of my blog list. ;)

So much reading to do I can't find the time. Just been banned from Real Science so expect a few posts soon.