Some Thoughts on Constancy in Culture

I've just been watching the Funeral of Queen Elizabeth II, my impressions are similar to those of the wedding of Prince Phillip. At that time I was watching that prior event with someone and was asked what I thought of it. I said thought it was quite a primitive event, being a display of ape hierarchy and a liminal ceremony, a right of passage. For all the trappings this funeral struck me similarly, which is not to say it was not emotionally moving.

However there is a deeper and more important strand to this event, aside from Queen Elizabeth II's obvious and lifelong devotion to the nation of whom she was a figure-head. 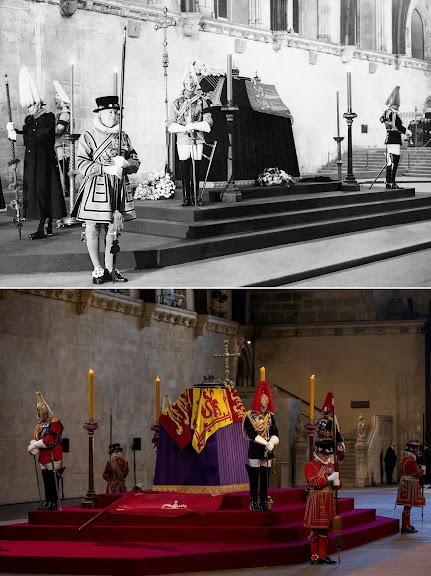 What we see is a continuity, some 70 years after the death and lying in state, Queen Elizabeth's lying in state is almost identical. That is not to say that there is no change, in some periods and over centuries there has been a lot of change, that noted; it is not my intention to get bogged down in analysis of such details. For myself I see a minimally modified linkage in a chain of information between events separated by seven decades.
The point is that the UK's monarchy represents a long tradition that, in order to fulfil its role, should resist change and allow change to only incrementally impact it. This is not popular with the Woke Totalitarians, who now control the UK's culture. But they have had to allow 'the proles' to indulge in this due to the gravity of the event of the Queen's passing through wall-to-wall coverage in the very media they control. As Karl Benjamin recently proposed, the monarchy are like anchor chains lying under the accumulating sediment of cultural change, when an event puts tension on the chains they are pulled up, shedding the sediment and revealing their unchanged form.

The ongoing cementing of the left's cultural hegemony with UK society is a sign that forces for change in society have overshot and need to be pulled back. This is concerning because both conservatism and progressivism are necessary forces with society. Too much conservatism leads to cultural atrophy, too much progressivism leads to chaos. And in the face of the massive societal change that is coming from Machine Learning and Artificial Intelligence systems (MLAI), going down a road that destroys tradition, unleashes chaos, and unseats the sense of meaning in the culture, is precisely what we don't need.

The further issue of what Woke Totalitarians would do with MLAI systems trained to read what individuals put on the internet (and in private communications), divining sentiment and detecting dissenting ideas... That is another issue for another time, but it is worth conjecturing that MLAI is at the heart of China's Social Credit system.