Arctic Land Permafrost is beyond the Tipping Point

It is not currently known how much of the carbon currently locked in permafrost will end up in the atmosphere/ocean system. But let's take just 1/4 of it being released, that's an additional burden of 4 decades worth of current human emissions, and a pulse of emitted CO2 has a long lifetime in the atmosphere/ocean system, centuries to millennia. Given that the experts still don't know how much of the carbon will be released I am not going to get into the 'what fraction' question.

However, before proceeding with my argument, I will observe the following: If the permafrost thaws dry then the emissions will mainly be CO2, but there will be the risk of peat fires at the surface which can burn deep, like moorland fires, that's more CO2. On the other hand, if the permafrost thaws wet, anaerobic metabolisation of the thawed carbon based biomass will entail a significant fraction of methane, CH4. Arguably the latter may be worst, but a lot depends on rates and efficiency, again unknowns.

What I am asserting is this:

The total loss of permafrost and release of some fraction of the stored carbon into the atmosphere/ocean system is already a post-bifurcation certainty and is not something any practically attainable human effort can stop.

The loss of permafrost is in large part driven by the regional warming due to the loss of Arctic Sea Ice. In a previous post (almost 10 years ago) I discussed an event in a past geological epoch and relevance to the current situation. I referenced a paper which looked at Arctic regional warming within and without Rapid Ice Loss Events (RILEs) within a climate model, and a figure from that is produced below.

This shows that during RILEs there is substantial warming of the surrounding land, land overlying permafrost.
In my Slow Transition post (2015) I addressed the false expectation of a rapid crash to virtually no sea-ice in the Arctic ocean, that proved right. In my more recent Fast Transition post (2022), after a long hiatus in blogging and following climate science, I showed that the bifurcation in the Arctic sea ice was in front of us all the time. It was only with 15 years of data after the end of the bifurcation that we could see the wood for the trees. 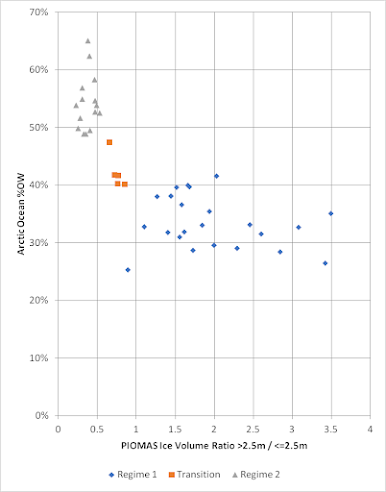 Once the volume ratio of thick and thin ice had fallen to a ratio of 1, a rapid bifurcation happened from 2002 to 2007, this was driven by ice albedo feedback and enhanced formation of open water due to thinner ice at the start of the melt season.
This bifurcation separates two distinct regimes in the nature of Arctic sea ice cover.
Regime 1: Pre 2002 the ice pack was defined by low efficiency of production of open water due to a pre-dominance of thick multi-year sea ice.
Regime 2: Post 2007 the ice pack was defined by high efficiency of open water production due to a predominance of thinner first year ice grown over winter.
To retrace the bifurcation into the pre-2002 regime will not happen due to the ongoing anthropogenic forcing. A major player in this is the BCE (Beaufort Chukchi East Siberian Sea) Killzone, a region into which currents in the Arctic Ocean circulate ice, and within which total melt-out in the summer is almost guaranteed. This melt out prevents the re-growth of thick multi-year ice.
And as it is with the Arctic Ocean being stuck on the hard landing side of a bifurcation, so the land around will warm (as it is doing) and therefore the permafrost on that land is destined to melt out. There is no practically attainable way back.
Posted by Chris Reynolds at 11:25