I've been very busy at work, it's audit season, so no spare time. But this weekend is down-time to rest. So I've just had a look at the Arctic Ocean sea ice data for September 2007 to 2022.

The period September 2007 to 2022 is a 16 year period, which finally gives us some solid stats and a good basis for establishing the current post 2007 sea ice climatology.

For the purposes of this, I define the Arctic Ocean as Beaufort, Chukchi, East Siberian, Laptev, Kara, Barents and Greenland Seas. Data is obtained from here, "N_Sea_Ice_Index_Regional_Daily_Data_G02135_v3.0.xlsx". September extent is calculated as the average for 1st to 30th September inclusive. 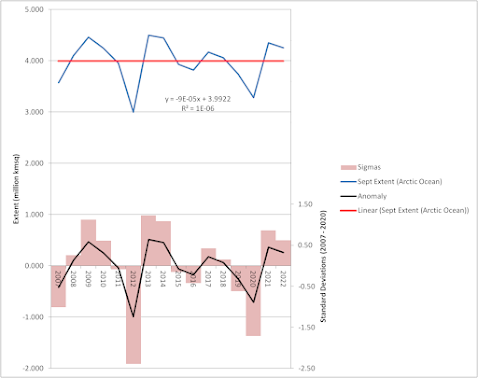 The blue trace shows September extent for the Arctic Ocean, and as shown from the red (linear trend) line and equation with R2, from 2007 to 2022 the extent trend is statistically indistinguishable from flat. That this has held for 16 years indicates a new regime, as discussed previously.
In the bottom part of the above graphic are some statistics, the black line shows extent, the pink bars show the extent normalised to standard deviation (1 sigma = 0.415 million kmsq). It can be seen that the most significant drop was in 2012, and at around 2 standard deviations this is seen to be an outlier event with a probability of around 5% (1/20). With a 16 year series the occurrence of a 1/20 event is not surprising.

What will drive September extent out of this very stable situation?

Below I present the PIOMAS reanalysis sea ice volumes for April and September 1979 to 2022, for the whole PIOMAS domain (which includes the Arctic Ocean itself, as well as other areas). 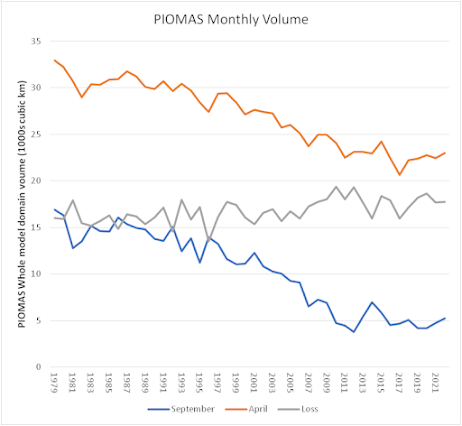 The orange line shows April PIOMAS sea-ice volume, the blue shows September PIOMAS volume, and the grey line shows the difference between April volume and the following September volume, that being melt season volume loss.
Whilst extent shifted into a new regime in 2007, the above shows that the shift to a new regime for volume loss happened in 2010. This is not surprising, since the extent is mediated from thickness losses by the Open Water Formation Efficiency (OWFE) change implied by thinning of the sea ice, whilst volume losses are a more complex process, dependent on Autumn growth and relative prevalence of types of sea ice (notably first-year and multi-year ice).
However the volume data paints a similar qualitative picture of stabilisation of the Arctic sea-ice into a new regime. What will end this regime will be Winter warming, driven largely by local and global concentrations of atmospheric greenhouse gasses. this warming will start to thin the Arctic Ocean's Winter ice and at some point allow enhanced OWFE, allowing summer volume losses to aggressively expose open water through the melt season. That will result in further losses of September sea-ice extent.

So the current stability of sea ice is but a pause in the process, assuming continued increases in greenhouse gasses. And that latter proviso seems highly likely to be fulfilled.