Just a few things of note from Ukraine on the aeronautical side of things. Images from my account on Airnav Radar Box which is cheap and (for me) very useful, I can recommend it highly.

First, here is a plot of aircraft flying over Europe through to Russia. Click to enlarge.

Note that Europe remains far busier than Russia, it generally is but now the situation is crazy. With a population satisfied by vodka and potatoes, and a GDP similar to Spain (whilst being far larger than Spain), there isn't much demand for flights in Russia. Following the sanctions that has only been exacerbated.

Also note how close to Belarus and Ukraine the Europeans are flying as compared to the obvious and massive no fly zone on the Russian side. Having killed, through sheer ineptitude, 298 people on flight MH17 the militarily incompetent Russians have decided to play it safe. That no-fly zones tells you how much the Russians trust their own forces.

An idea of how close the Europeans are prepared to fly their signals intelligence missions is given in the image below. 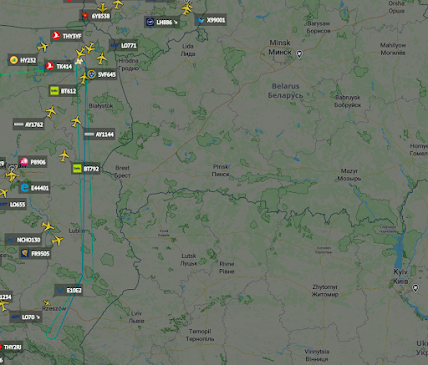 At 12.5km altitude that aircraft is likely to be an electronic hoover, sweeping up masses of signals intelligence data from the region. However it won't be what's getting the mobile phone traffic. The leaked Russian phone calls and targeted destruction of command and control leading to the loss of senior commanders will be because the idiot Russian's own communication is trash and they've been stealing SIM cards in Ukraine, which then means the Ukrainean telecoms systems can be used as a surveillance tool. (eg. here).
Like I say, potatoes and vodka...

Email ThisBlogThis!Share to TwitterShare to FacebookShare to Pinterest
Labels: Ukraine