The BCE region is comprised of the Beaufort, Chukchi, East Siberian Seas. Due to the Beaufort Gyre it has a special role in the dynamics of Arctic sea ice.

The Beaufort Gyre is explained in this page from NSIDC, from which I take the following graphic. 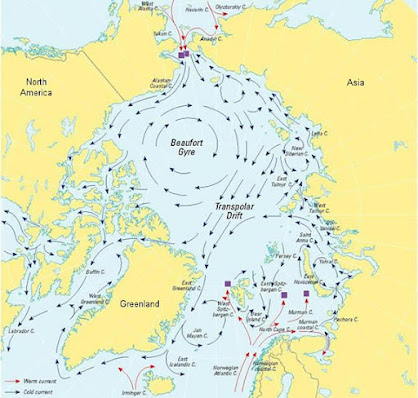 Driven by wind patterns, the Beaufort Gyre drives the ice around, from the Beaufort Sea through Chukchi and into the East Siberian Sea. Prior to the transition to the current primarily first-year ice state of the Arctic Ocean the Beaufort Gyre acted as a flywheel, taking thick mechanically deformed old ice (multi-year ice) on a round trip before driving it against the Canadian Arctic Archipelago (all the islands to the north of Canada). Thus the Beaufort Gyre acted as a stabilising influence on the Arctic sea-ice.
In the following two images I show PIOMAS volume broken down into contributions from two thickness bands, less than 2.5m and greater than, or equal to, 2.5m thick. The multi-year ice being in the thicker band (red plots). 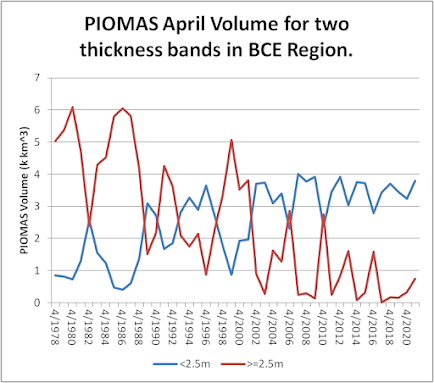 April is the peak of volume at the end of the winter night, and what can be seen is a great deal of variability in volume of both thicker and thinner ice, also a pattern where if thin ice volume goes down thick ice volume goes up (and vice versa). This is indicative of pulses of multi-year sea ice being driven from the Central Arctic and into the BCE region. In summer there is a stronger overall trend that is of great significance. 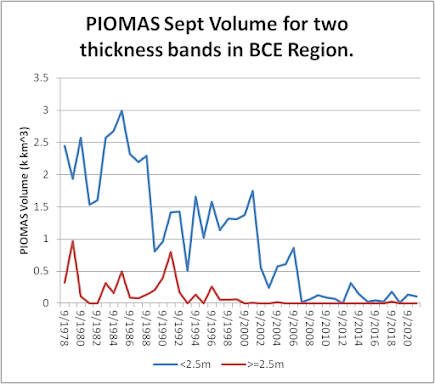 In September, at the end of summer, Arctic sea-ice volume is at its lowest, as can be seen pre-2000, there is very little presence of thicker ice, almost all of this has thinned so much as to drop into the thickness band below 2.5m. However ice does survive the summer in this region.
However something happens in 2002, there is a catastrophic loss of ice volume in the summer, this happened after April volume over 2.5m thick was the lowest in the record up to that point. The September volume data shows that the BCE region never fully recovered, after that in 2007 there was another collapse in volume. From then on the BCE region has become a summer killzone for sea-ice.
Whereas once ice would cycle, age, deform, and thicken, in the Beaufort Gyre, the ice in the outer edges of the gyre now enters the BCE region and melts out each summer. This was a significant change in the dynamics of the Arctic Ocean sea-ice, the end result was a new steady state regime with a predominance of first year ice.
The presence of this 'killzone' sets a firm obstacle to prospects of a recovery in the Arctic Ocean's sea ice. This is because the loss of ice each summer in this region acts to maintain the first year ice dominance and each summer eats away at what multiyear ice has managed to regrow within the Central Arctic region adjacent to the Canadian Arctic Archipelago.
I will have more to say about the period 2002 to 2006/07 in upcoming posts.
I will also have more to say about tipping points and zones of stability evident within the sea ice data.
Posted by Chris Reynolds at 11:23