Rather late, due to work commitments, here are my comments on the 2015 sea ice maximum. Three days ago NSIDC provisionally called the maximum at 14.54M km^2, on 25 February 2015. Does this mean anything for the coming season?


Using the G01235 Sea Ice Index the maximum was 14.595M km^2 on 22 February 2015, why the difference with the NSIDC Sea Ice News article? I do not know because it is not clear which index they are using. There has been a major revision to NSIDC sea ice data with reduction of the pole hole and new masks, the pole hole being the gap in coverage due to polar orbiting satellite tracks. Checking G01235 shows that there has indeed been a change in the finalised data, so that is not the issue. Which leaves me puzzled as to what the difference is between Sea Ice News and G01235. However as I have used G01235 throughout the history of this blog, I will continue with that dataset.

Extent is seen to be the lowest for the peak period in post 2007 years, 2015 having a flat maximum period. This is in part  due to climate change, however the role of low sea ice in Bering and Okhotsk does not have a clear climate change cause, so it is not possible in my opinion to hold up this year's record minimum as wholly due to climate change. I discussed Bering back in January and the wider state around maximum in my previous post. 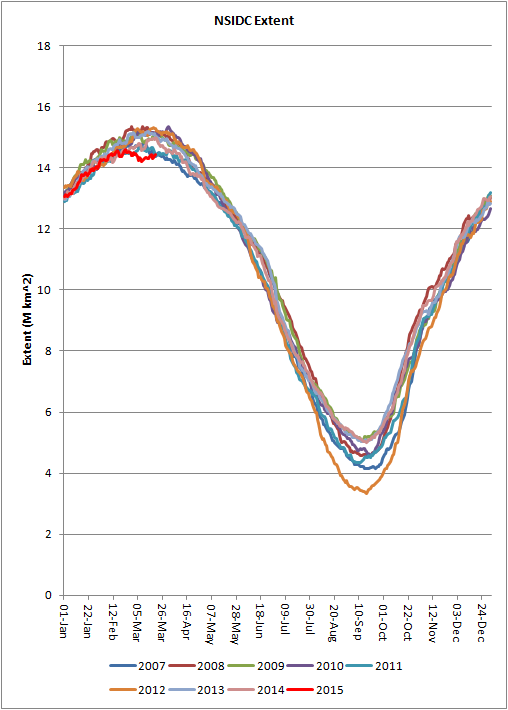 However this year has seen the third lowest winter extent on record, and the long term decline is clear and is very likely due to climate change. Current data takes us up to 20 March, just before the equinox, so 1 January to 20 March for 1979 to 2015 makes a reasonably consistent set of data, it is plotted below. 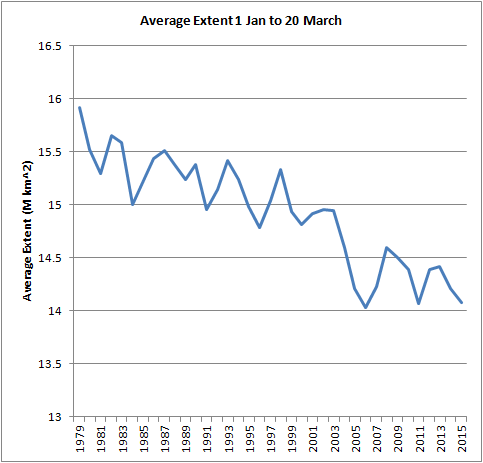 The post 2003 decline is marked, that years may be significant in view of Zhang et al 2008, discussed here, and Wang et al 2009, discussed here. My interpretation being that the dipole mode of atmospheric circulation was found by Zhang to become prominent after 2002, and Wang demonstrates a role for the Arctic Dipole in sea ice loss years. I suspect changes in the atmosphere associated with the winter dipole pattern may play a role in the post 2003 decline of winter sea ice. However I haven't had the time to look into this using regional data.

Note that for late February neither Eurasia nor North America anomalies of snow cover using Rutger's Snowlab data show a step change around 2003, suggesting land warming is not a likely cause.


Now that the maximum has been reached attention turns to the coming melt season, what does the record low of this year, and very early (though not the earliest) date of maximum mean? 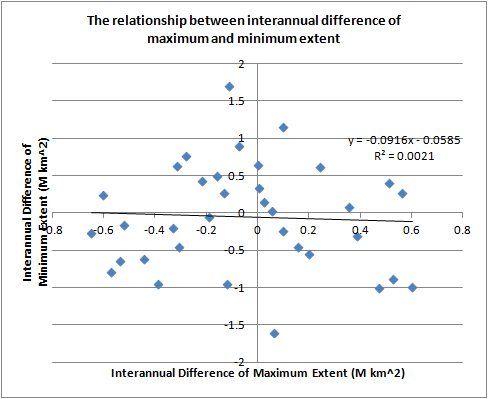 The above scatter plot answers the question, there is no relationship between the interannual difference in maximum extent and the interannual difference of the minimum extents for the following melt season minimum. So this year's record low extent tells us nothing about the coming season, which makes sense because maximum extent is set by conditions outside the Arctic Basin, whereas minimum extent is mainly set by conditions within the Arctic Basin.

But this year is a very early maximum, what does that mean? 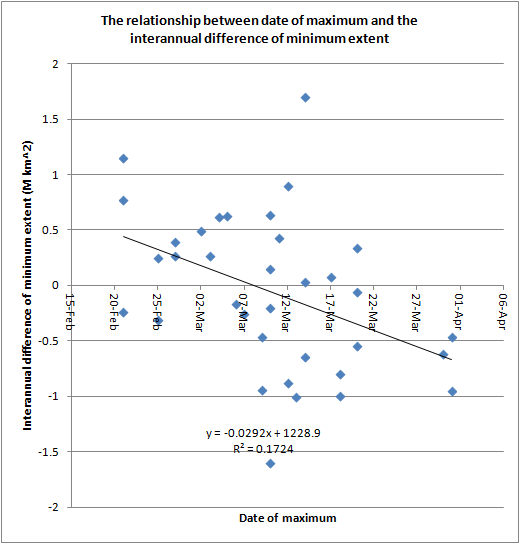 To examine this further I have calculated the new records in the 1979 to 2014 data. I have then tabled the years of new records with the date of maximum.


All of these are mid to late March, that may or may not be significant. What counts here is the distribution of all years of date of maximum, that data has been calculated as a histogram with a bin period of 7 days, and the histogram of record years has likewise been calculated. 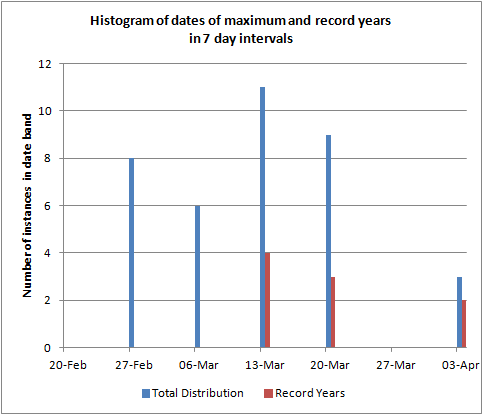 The dataset is small, however I find the clustering of record years to after 9 March quite persuasive. It seems to me that while the early maximum of 2015 doesn't rule out a record this year it suggests it is not likely, but this data does no more than suggest that as being the case.

My problem now is that I find myself unable to hazard even a guess as to the mechanism that might underlie this possible relationship. One interpretation here is that within a small dataset this pattern is just happening by chance. However I still think it is a real pattern, and the problem lies with my grasping the mechanism.
Posted by Chris Reynolds at 03:38

Chris,
One possibility for this is that it appears that one of the preconditions for a major melt is the length of time the extent stays close to the maximum. The longer the duration the greater the melt.
http://forum.arctic-sea-ice.net/index.php/topic,1149.msg48538.html#msg48538
Possibly the long period is an indication of fragmented ice that is easier to melt.

I think the observation with regards flatter maxima that you make there is more persuasive than my marginal 'day of max' measure. Marginal in the sense of a small peak in a period of relatively little change. I might try looking at the years I list above from that POV. I do think Nightvid has a valid critique regards strength of prediction though.

I'm not convinced about your suggested mechanism though. I don't see how the ice away from the ice edge would necessarily become more fragmented. Nor do I see how this behaviour at peak would impact the ice at minimum within the Arctic Ocean.

There are two things that I'm pondering.

1) The role of Atlantic sea ice bordering the Arctic Basin, as possibly related to Arctic Basin ice state and the minimum.

2) The role of the atmosphere, is there a preconditioning / predictive role for the atmosphere in leading to lower sea ice extents. i.e. is there and atmospheric set up in winter that causes the flat topped maxima and somehow leads to (for example) strong dipole conditions in summer?

A 5 day average of NSIDC extent ending 25th Feb gives 14.536 as the maximum, but it could well be something different.

I was using the 5 day average extent for my calculations. When individual days can jump around by 100K I don't see individual days as important. Although generally both occur within a couple of days of each other.

That would make sense, and I recall reading in a recent email exchange into which I have been copied, that NSIDC use a 5 day average. I should have tried it to see if it worked.

Work is ferociously busy right now, I'll have a look at annual maximum 'flatness' over the weekend and will post if I come up with something of use.

I believe that NSIDC 5 day average is an average of concentrations before applying the 15% cut off test and is therefore potentially different to average of 5 one day numbers but presumably these are not too different.

So it isn't looking good.

You saved me some work, looks like it is just a fluke from using too short a dataset.

This lesson strengthens my determination to stick with NSIDC extent as a long series and continue to ignore the short series like JAXA. Of course this doesn't mean NSIDC extent is long enough to make the probability of random flukes unachievable.

Sorry about that David, it happens to us all if that's any consolation.

Thanks Guys,
I am going to build my own copy of the NSIDC data set so I can do the long term stuff myself.

Having checked CTArea IJIS and NSIDC at 200K- and 300K-, the pattern is consistent across all the data sets. So I only need to have one to work with. I'll play around with it and see if I see anything more in it.

I don't want to be like the deniers claiming an effect that isn't there, however at a time of rapid change long term trends may occasionally hide new behaviors.

As a side note I checked RSS temperature trends today and despite the claimed 'hiatus', it shows a greater rate of warming from 1979 - 2015, than from 1979-1997. Just shows what one anomalous year can do in a short trend.

Give me a shout if you need anything. The NSIDC data is patchy (alternate days and two (?) large gaps) early in the dataset, for which I have interpolated in my dataset.

I have a spreadsheet tabulated as years in columns and days in rows. But I use 365 day years as a hard rule, so I ditch day 366 in a leap year. That makes the data line up with PIOMAS and doesn't have an impact I have detected. If you want that data in a csv just give me a shout.

It is of course possible that en event like 2007 has started correlations that were not present previously. What made me doubt this was going on was that Crandles' correlation periods both overlapped 2007. But it remains feasible that there is a change which has induced or revealed behaviour leading to such correlations in recent years.

BTW - 2007 isn't the only year, for the East Siberian Sea 2003 is the key year. A process causing apparent changes in the basin wide stats might be due to a regional process.

I have done some further work on this. As we don't have a lot of data I calculated the 15 year trends for the past 22 years.

If I'd had this information last year I wouldn't have made such an inaccurate assessment of the loss.

I have found short changes in correlations, which might indicate a change. However such short changes are not likely to be statistically significant even at the 95% level, let alone 99.5%.
http://www.oneonta.edu/faculty/vomsaaw/w/psy220/files/SignifOfCorrelations.htm
(That's the page I use regularly)

Because a statistic doesn't meet such a level of confidence (my preferred is at least 99%) doesn't mean there is nothing happening. However absent other evidence, key here is mechanism, the conservative conclusion has to be that the changes in correlations are just random noise, mean nothing, and have no predictive value.

Seeing such changes after a year like 2007 brings a host of mechanistic players into the arena. As far as I know 2004 is not so remarkable - except for the proximity of 2003 in the ESS.

Chris,
In climate R^2 doesn't have to be particularly high to be significant,there are far too many other known factors involved to ever get a high correlation.

Going for another minimum like 2013 / 2014 is very courageous. It requires a melt 1.5 std devs less than the long term trend.

The statistical model from which the R2 is derived takes care of the variation due to extraneous (exogenous?) factors. I don't agree that one can waive the usual assessment of confidence.

Ice state suggests this, weather may cause different results.

This is not my formal prediction.