This is a rather delayed comment on the excellent Lindsay & Schweiger paper that provides lines of fit to sea ice thickness data. One reason for delay is that I have been awaiting the latest PIOMAS update, now that will have to wait until later this week, because I don't want to bury this post.

The other reason is that I have been grappling with the issue of mapping the SCICEX box onto the PIOMAS grid. The SCICEX box is a release are whose dimensions are governed by the submarine upward looking sonar (ULS) data from submarine cruises under the ice. Image from NSIDC.

The SCICEX box is shown as 'current release area' in the above graphic. The original release area is also known as the 'Gore Box', that is because US Vice President Al Gore arranged the release of ULS transect data to certain scientists. The data had been secret because the US and UK navies (and USSR for that matter) patrolled under the ice in nuclear submarines mapping sea ice thickness to identify places where the ice was thin enough that they could break through through, and launch their nuclear weapons.

The SCICEX box dimensions are given on this page as the grid points of the 15 corners (vertices) of the SCICEX box. My main problem has been that of determining the latitude as a function of longitude on a line, such as a line between any two adjacent corners of the SCICEX box. I've come to the conclusion that it is beyond me, so I'm not pursuing it. I could have emailed Dr Schweiger, but I make it a rule never to ask busy scientists when it is very likely I will just need to be spoon-fed the answer. ;)

Lindsay & Schweiger provide a plot of thinning in the SCICEX box, this is the one that seems to have gained most publicity, although nowhere near as much as it should have. 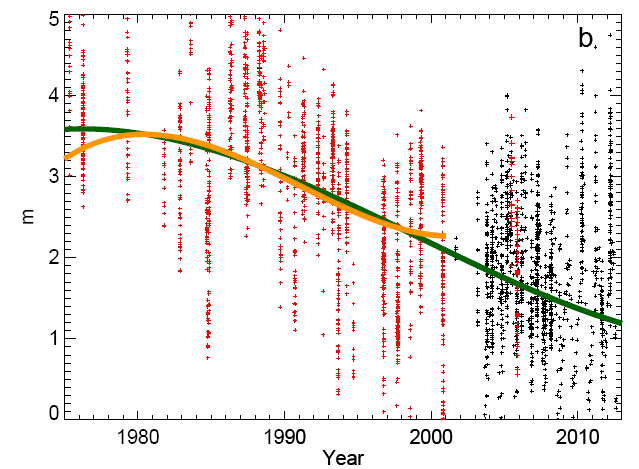 That figure is their figure 5.

However there is another figure showing the same thing, their line of fit to thickness data, but for what they term the Arctic Basin, Lindsay & Schweiger 2015's figure 4. 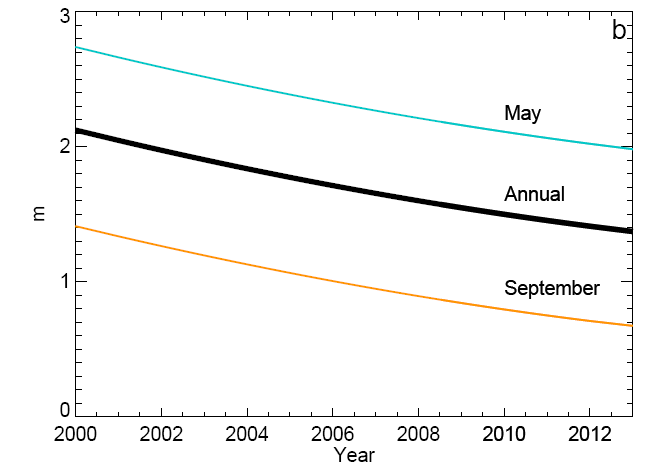 This is a shorter series because the SCICEX box is virtually all the thickness data available from 1975 until the 2000s, so extending the whole Arctic Basin series earlier would be unsound. However the use of an Arctic Basin region makes things easier for me.

Lindsay & Schweiger's Arctic Basin consists of the following regions: Beaufort Sea, Chukchi Sea, East Siberian Sea, Laptev Sea, and Central Arctic. Using gridded PIOMAS data it is easy to calculate thickness for the Arctic Basin on a basis that is directly comparable with the above graphic (well, easy when I already have the core code worked out). Normally when calculating thickness I use a 15cm cut off as used by Dr Zhang on the PIOMAS website thickness graphic, ice thinner than that doesn't contribute to the average. In this case I have not because there is no such cut off in Lindsay & Schweiger's source data. The Lindsay & Schweiger data (L&S2015) is digitised from their figure 4, so the lines of their trend are not as smooth as if source numeric data were used, because of errors in visual estimation. 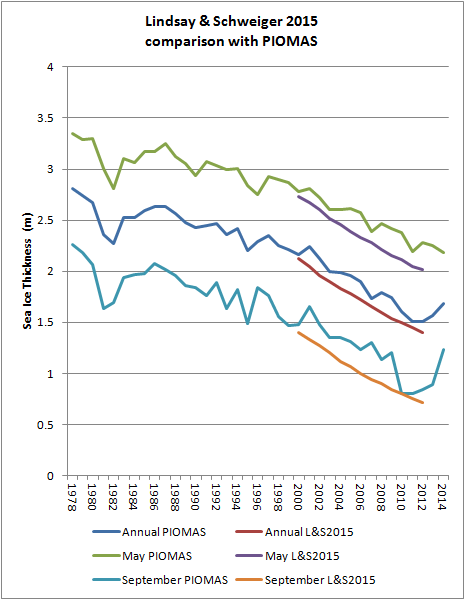 I could have named this post 'PIOMAS Vindicated', but I have already used that. Nonetheless, PIOMAS is supported once more by observational evidence, it seems to be a bit higher than the observational best fit, but that is a minor detail. Lindsay & Schweiger caution:


While we have typically used the ICESat-G system as a reference here, that does not mean it is a priori considered to be more accurate than the others. Indeed, nothing in the study speaks to the absolute accuracy of the measurements.

What strikes me is that the two sets, observational line of best fit, and model data track so well over the period I have been able to compare. If one takes one pair of plots, Annual, May or September, then it is apparent that there is an awful lot of whitespace in which the model could go wrong, but it does not.
Posted by Chris Reynolds at 12:13

8 measurement systems, 5 pretty much agreeing, one 20cm thinner, one 42cm thicker and one 59cm thicker.

The average of those 8 (using table 2 co-efficients) is nearly 10cm thicker and if you moved those lines up 10cm they would be a better fit to the PIOMAS lines.

September thickness down to 0.44m but uncertainty of +0.59 to -0.2 depending which measurement system you believe makes a lot of difference.

I preferred to take the data as is, but even then I am comparing the LS2015 data (a fit), to my average thickness calculation from PIOMAS data. A more satisfying approach would have been to employ the LS2015 method on the PIOMAS data.