Where is the ice in the Bering Sea?

Like me, you've probably noticed the singular lack of ice in the Bering Sea, it is very unusual and the cause is northward air flow. That's as good an excuse as any for my first blog post of the 2015 sea ice year.


The regional sea ice data from Wipneus is used as a source of extent data for the Bering Sea. This is then recalculated as anomalies from a 1981 to 2010 baseline in order to ease diagnostic comparison with NCEP/NCAR anomalies, which also use that baseline average period.

The anomalies of sea ice extent for the Bering sea reveal that this year the first week of January has the lowest extent in the satellite era. Note that there is no data for 1988 because this lies in the data hole from 3 December 1987 to 12 January 1988, the largest single outage leaving no sea ice data from satellite observations. 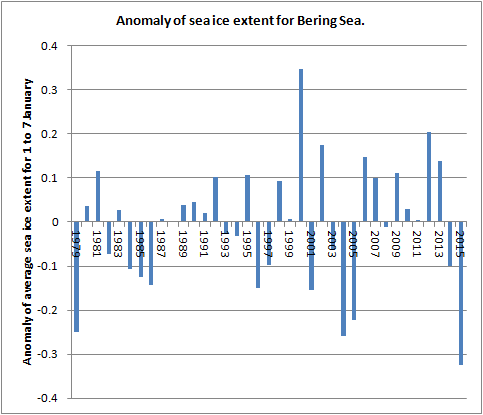 The first issue to look at is what has led up to the current state. The following graph shows Bering Sea extent from September to the most current data (7 January). The actual plot (green) shows the unadjusted figures for extent over that period, climo (red) shows the average extent for each of the shown days averaged over the period 1981 to 2010 (i.e. the climatology), the anomaly (blue) is the difference between the actual data and the climatological mean. 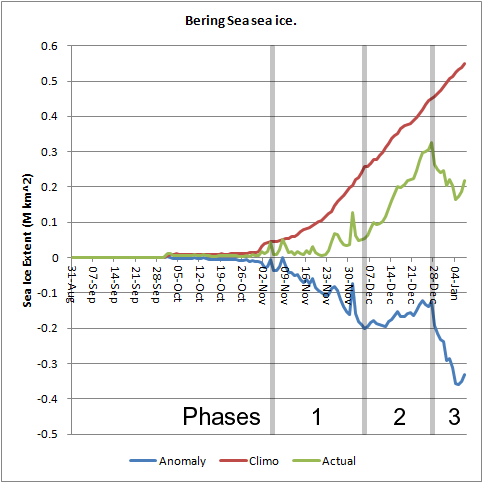 The atmospheric state is shown in the following three plots from NCEP/NCAR. All of these daily composites are plotted as anomalies from the same baseline as was used for the sea ice extent.

In phase 1 a low sits over the Bering Sea (blue purple patch over the leftward horizontal centre line). A low pressure here is common, however during phase 1 the low was lower than normal. The ice formed at a slower rate than average, nonetheless it formed. The high over Alaska formed a weak dipole with the Barents low causing moderate inflow of warmer air from the south.

In phase 2 the ice formed more rapidly. The Barents low had intensified and spread, cutting off dipole type flow from lower latitudes and instead drawing air from the Arctic.

It is in phase three that things get interesting. Here the Bering low shifts towards Eurasia allowing a strong dipole to develop drawing air in from the south. This appears to be the cause of the decline in sea ice extent during phase three, a decline that has led to record low Bering Sea ice in the first week of this year.

Another way of looking at the situation is with a meridional wind plot, which shows the south/north component of the wind. Here as strong south to north flow is evident.

It might be wondered, not unreasonably, how real this wind is, because it is only the difference in wind from a long term mean. So we can look at the mean (average) wind, not the anomaly (difference from long term mean). And here the same flow is evident.

The final part of the jigsaw is to look at what all this is doing to temperatures. Here caution is needed, because the surface temperature may in fact be raised by the lack of ice as the ocean vents heat into the atmosphere instead of being insulated by ice.

So first I look at surface temperatures, but I also look at air temperature at 850mb height.

That the warming aloft is almost as marked as that at the surface suggests we are seeing the i,pact of warmer air drawn into the region. So the reduction of extent has happened at the same time as a northward dipole flow has driven ice and warmer air over the Bering Sea.

Turning back to numerical anomalies, I have a series of anomalies in extent for the Bering Sea in January, and have also used NCEP/NCAR to make January timeseries of Sea Level Pressure (SLP), Surface Temperature (ST) and Meridional Flow (MF), all for the region bounded by 55 to 65 degN / 170 to 190 degE, a region roughly bounding the Bering Sea.

All three of those series have been converted to anomalies with the same baseline period of 1981 to 2010 used above. I have then correlated each of these three with sea ice extent anomalies, prior to correlation all series are recalculated as interannual differences, in the process 1988 and 1989 are lost and excluded. The Pearson correlation coefficients are as follows.

These are for a 33 element series, so the final two are statistically significant at the 2.5% probability level (ref). That's not a great significance, but the physics of the matter suggests that it is indeed the case that as the winds that carry warmer air from the south increase, temperatures in the Bering Sea go up, and ice is melted or stopped from forming. Furthermore the increased open water causes additional warming of the atmosphere, this latter point might explain the higher correlation of surface temperature over meridional flow.

And what of Global Warming? It is worth noting that both extent and volume show statistically insignificant increases, while sea level pressure is declining, again this is insignificant. This is interesting in view of the statistically insignificant correlation result found above; which suggests that a decline in pressure would imply a decline in sea ice. I assign this confusing result to the same factor that masks any Global Warming signal, weather is the dominant factor in Bering Sea sea ice. So this year's record low start to the year should not be taken as the start of a collapse.

That noted, the dipole off Bering may be pushing warmer Pacific water into the Arctic Ocean through the Bering Straits, this together with the winds mentioned above may be a reason that the Chukchi Sea has the second lowest compactness in the first week of January since 1979 (again 1988 has no data). 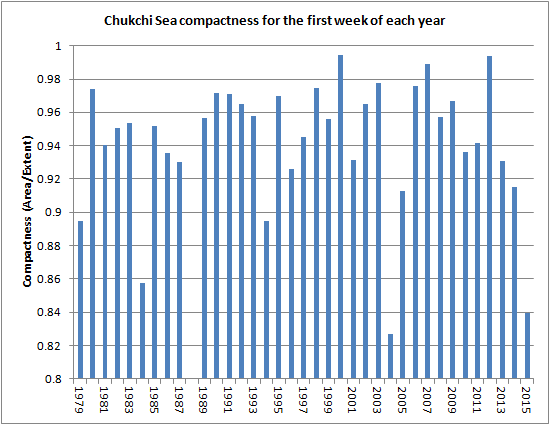 Both are statistically significant to 99.5%. The correlation is such that a high PDO means low Bering sea ice, PDO December was 2.51, January was 2.45, both are in excess of 2 sigma.