The Slow Transition: The Mono-modal Spike.

In my previous post I looked at the implications of winter thickening for the question of whether Arctic Sea Ice faces a rapid crash or a slow transition to a seasonally sea ice free state. There is another aspect of the PIOMAS data which throws light on this, and which shows something I have commented on in recent winter commentaries.

The graphs produced from the PIOMAS gridded data show grid box thickness along the horizontal axis and the volume of sea ice accounted for by all the grid boxes of the thicknesses shown. To do this grid boxes are grouped in 10cm increments of thickness. A notable feature of some plots is a spike at 4m thickness, this is because 4m thickness is actually 4m and thicker, this results in a spike of large amounts of volume in the early years of the PIOMAS data, where there was a lot of thick ice.

That explained, looking at the graph below we can see the average thickness distributions of volume for 8 year periods, I have used 8 year periods because 2007 to 2014 is an eight year period. Using the same length of time for each average allows fair comparison. So what is going on? 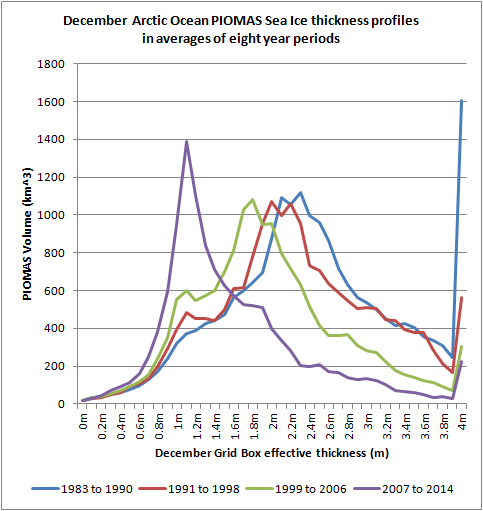 Starting with the 4m spike of thickness, this declines rapidly after the 1983 to 1990 period as a lot of thick ice was lost from the Arctic in the early 1990s during a strong positive phase of the Arctic Oscillation which led to massive export of old thick ice via the Fram Strait. From that event the Arctic Ocean's sea ice has never recovered, this is seen to be a trigger point for the subsequent ice-albedo feedback driven loss of sea ice as covered in this blog post. From that early period there has been a consistent thinning of the sea ice, as seen for the subsequent 1991 to 1998 and 1999 to 2006 periods. However post 2007 the shape of the distribution has changed, with substantially less thick ice, and a greater peak of ice around 1m thick in December.

At the thin end there is a very important detail. All years show curved descents to zero thickness / zero volume, for grid boxes under 1m thick. There is an ongoing shift to that curve being steeper in recent years, but amongst all of the other aspects of change in those curves it is the one consistent feature, and it does not change as much as does the thicker ice. The result is that volume declines of thicker ice continue until the ice is thin enough to hit the lower limit, then a new regime takes over.

Here are the thickness distributions for 2007 to 2012, it the bar-graphs equivalent of a line graph being 'spaghetti', which I suppose you could describe as barcodey, but it's not the individual years I am concerned with, it is overall pattern. 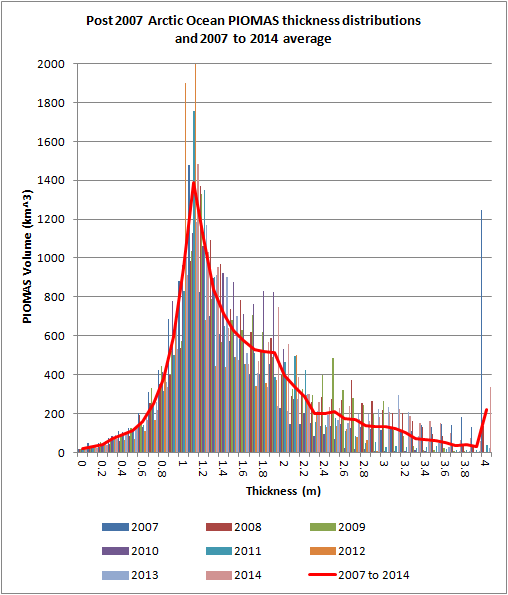 In the slope rising to around 1m thick, the individual years hug the red 2007 to 2014 average closely, with far more variability on the downslope of the distribution above 1.2m thick. The variations around the peak are large, reflecting large variations in the area of sea ice around such thickness, but below 1m thick there is (at least to me) the impression of a wall below which volume is not falling. This is the result of thermodynamic thickening of ice.

Referring back to the first graph of this post, it seems to me that the behaviour under 1m shows that as the December ice has thinned it has met with an obstacle, the opposing force of thermodynamic thickening. As the ice pack has transitioned to a mainly first year ice state, much of this first year ice thickens at the same rate across the pack as the thermodynamics of ice growth dominate over weather and the result is what I have often described as a mono-modal spike, the signature of first year ice. So a greater area of first year ice leads not to a continuing decline of volume, but a growing volume spike of ice at around the same thickness.

This volume peak for around 1m thick ice suggests to me that the preceding rate of loss is likely to abate and a new slower rate of volume loss will take over. The result will be an inflection in peak volume in April, as the past rapid volume loss shifts to a longer persistence of ice survival and a lower rate of loss.

In a previous post of this series I quoted from Armour et al 2010:


Given the strong thickness–growth feedback of sea ice (Bitz and Roe 2004), where in a warming climate we can expect the thicker MY (multi year) ice to thin at a greater rate than the thinner FY (first year) ice, and the fact that the ratio of MY to FY ice entering into the MY ice category each year is decreasing, it is likely that the difference between FY and MY ice survival ratios will decrease in a warming climate. If this occurs, the Arctic sea ice system would move toward a regime of decreased memory and decreased sensitivity to climate forcing...

I summed this up as:


In other words, MYI remembers the insults upon it. FYI forgets each freeze season. Therefore as the pack transitions to a FYI state the memory declines and the persistence of volume loss declines, the trend of loss relaxes.

The multi year ice sticks around from year to year, losses of multi year ice are therefore remembered and their effects persist. This is why the bulk of thickness has declined. Now we are entering a period where the mono-modal spike of first year ice grows vigorously each autumn over much of the Arctic Ocean, increasingly wiping the ice-pack's memory of losses and restoring the volume to what in April is implied by a pack roughly 2m thick, about 19k km^3.

Only as the winter warms will the ice growth over the freeze season reduce, apropos of which, here is a plot of Freezing Degree Days (FDDs) north of 70degN and CO2. Because ice loss is warming the atmosphere in autumn/winter the relationship there might not be as straightforward as CO2 alone causing the decrease in FDDs, sea ice loss itself may play an amplifying role. However the loss of ice has been non linear, and this suggests a fairly tidy linear relationship, I need to consider this some more. 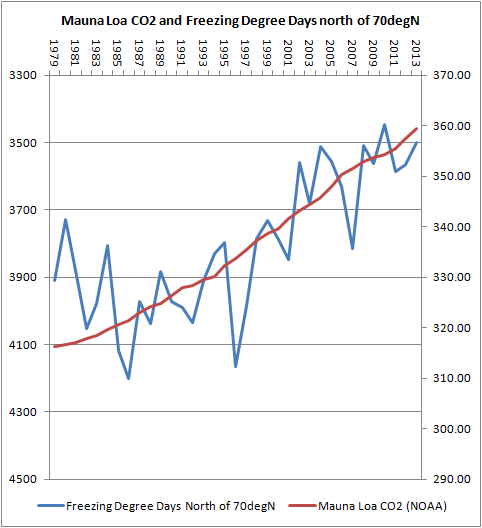 EDIT - I have looked at this, and it is not CO2 driving FDDs at the surface but sea ice loss itself.

Thank you, this is amazing - i learned a lot reading this: the graphs and your analysis are wonderfully illustrative and informative.