Well, it's the 20th of June and CT Area (Cryopsphere Today Area) data for that date is what I've used to make a successful prediction last year. I've also put in a prediction for 2014 September average NSIDC Extent with the Sea Ice Prediction Network, and their June Outlook is now published. Given the weather so far in June, is my SIPN prediction already destined for failure, and what of my June 20th CT Area prediction for 2014?


I've plotted all the June SIPN predictions in the following graphic. June predictions had to be in by 10 June 2014, so none of us had the advantage of subsequent events in the Arctic. My prediction was based solely in terms of May PIOMAS volume and an assumption that the atmospheric set up that has led to previous Arctic Dipoles between highs over the Arctic Ocean and lows across Siberia would emerge this year, up until a few days ago that was looking rather unlikely.

So here are the predictions (central value - red block) and their ranges (black vertical lines), click on the image to enlarge. Absence of black verticals is due to a prediction without a range. The code preceding each entry name is: S = Statistical, H = Heuristic, M = Model, SH = Statistical/Heuristic. 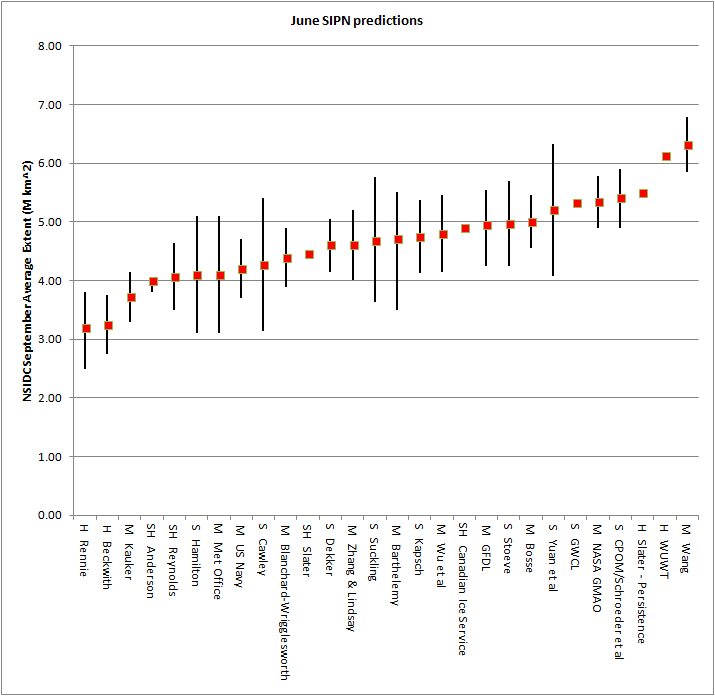 My prediction is the fifth lowest, however it is not a low outlier, my range is largely congruent with the modelling based predictions from the UK Met Office, the US Navy, and Blanchard-Wrigglesworth et al, none of which are names to be cast aside in Arctic sea ice science. Looking at the various modelling efforts, what is surprising to me is that they are scattered throughout the range of predictions. I've read most of the submissions and as far as I can see a clear pattern isn't apparent.

However since the prediction was made the Arctic has seen a very muted June melt. This can be seen in the anomalies of CT Area and NSIDC Extent, 2014 is in red. Anomalies calculated using the 1980 to 1999 average. 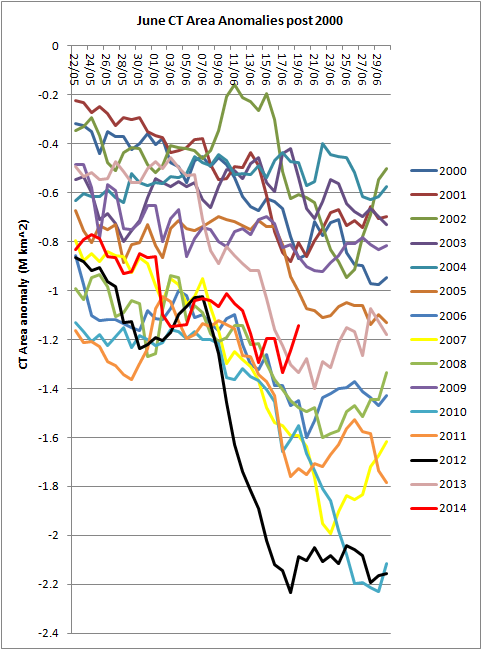 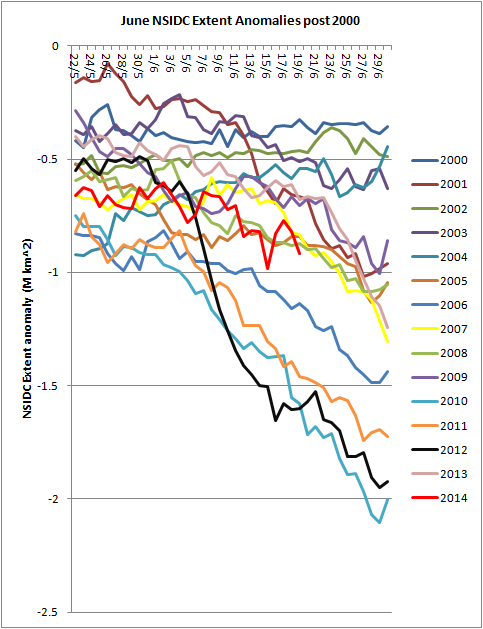 The following graphic is calculated by deducting the NSIDC extent on each day for the previous years from the extent in 2014, giving the state with respect to those past years. 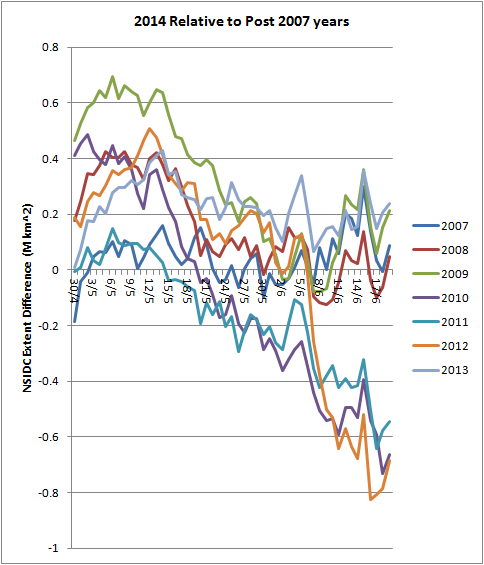 Looking at the difference between 2014 and other years shows how far behind the post 2010 years (2010 to 2012) we currently are, I am of course excluding 2013 because that was due to weather and tells us little about area and extent changes with respect to ice state. The 2010 volume loss event saw a drop in thickness and the start of anomalously large spring melts in PIOMAS. Anomalies calculated using the 1980 to 1999 average. 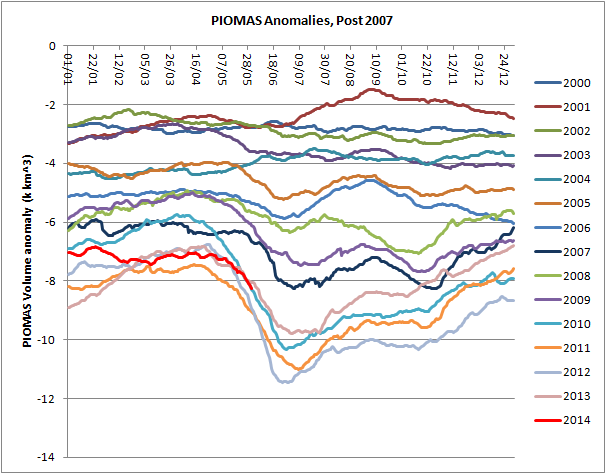 Clearly as of data to 31 May, 2014 has exhibited the start of a similar spring melt to the other post 2010 years, how will this have evolved? I haven't a clue given the state of the ice so far in June, but it is worth noting that even 2013, a year of poor melt, showed the same behaviour. Against that must be considered the fact that after 2010 June extent losses have increased (graph), this seems hard to expect for this June, also the spring melt comes to an end around the June solstice, which is about now. The June PIOMAS data will be critical to deciding what the rest of the season may hold.

However the weather is changing in the Arctic.

Clearly early June conditions were much warmer in June 2012, with 2013 and 2014 being similarly cold. However last Wednesday (only two days ago), there was a shift in atmospheric circulation which forecasts up to ten days indicate will persist in general form, with the Arctic Ocean tending to be high pressure and the Siberian coast tending to be low pressure. This is the pattern that has dominated the Arctic through 2007 to 2012, with 2013 breaking that run of years.

As of 18 June the high pressure over the Central Arctic is clear.

And the initial impact on temperature emerges, with a region of warm anomaly under the high pressure.

By tomorrow (Saturday) GFS shows this pattern to have evolved into a dipole with low pressure over Siberia and high over the ice pack. In the years 2007 to 2012 the summer average of such set ups brings out the dominant pattern of sea level pressure, causing a dipole between the lows of Siberia and the highs of the Canadian Arctic. Source: Wetterzentrale.

Wipneus operates a 'home brew' calculation of extent and area and he has noted drops in extent and area, ref, offering the opinion "The days of slow seem to be over." This is my expectation. We have had a very slow start to the 2014 season, June being the start of the melt season proper within the Arctic Ocean, but I expect things to speed up now that the atmosphere seems to be behaving more like a year of the 2007 to 2012 set.

This is why I will be delaying my June 20th prediction. Actually I would have had to wait until Monday when 20 June CT Area data is released. However using 19 June data the 2014 prediction is strongly at odds with the SIPN prediction I finalised earlier this month. The following graphic shows the CT Area prediction hindcasts for post 2007 years, showing the success of the method last year, and that according to 19 June 2014 CT Area, this year's CT Area would be as high as 2013, possibly higher. The CT Area prediction relies on the minimal trend of late season losses after 20 June, however the trend remains low after 20 June so late forecast is still feasible. 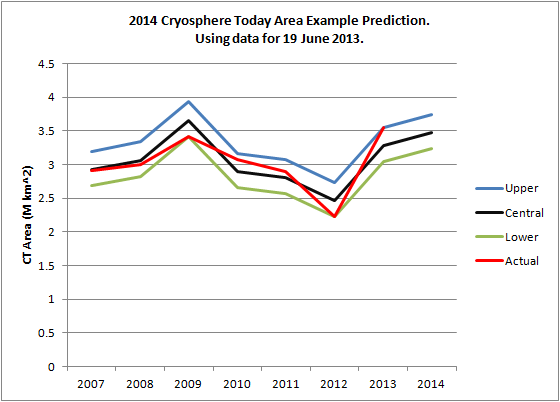 The precipitous drop in CT Area in June seems to me to reflect the rapid spread of melt ponding, in 2012 it seemed to be most marked due to large expanses of first year ice and warm air temperatures. Whether there is some fundamental factor (i.e. not the vicissitudes of weather) that means late melt ponding will be so poor in pre-conditioning for melt, or just won't happen at all, I do not know. But given the recent change in the weather it seems prudent to me to wait to see what next week brings. I suspect we will see 2014 have a late June cliff, this suspicion requires that I wait to see what happens before predicting CT Area.

If we don't see a late June cliff then the CT Area prediction will probably take precedence over my earlier SIPN prediction, so I will probably be predicting a minimum of the same order as 2009 or 2013.
Posted by Chris Reynolds at 14:26

My predicted range us 4,3 to 5,5. I used the "graph eyeball method" modulated by personal observation of the environment. I can refine the figure in a couple of months.

Turning to a slightly different subject, I realize the ice cover is important, but does anybody report the river breakup times in Siberia and Canada? I ask because I would expect the river flows, the water temperature and salinity may impact the way the ice cover changes in future years (?). I have seen the Ob and Pechora during breakup and the amount of water they release must change ocean behavior?

Sorry but I've not come across such predictions. River discharge temperatures should track changes in land warming, the Lena should affect the Siberian early season melt, the McKenzie should affect Beaufort. Discharge from the Ob affects Kara which tends to melt out early anyway, but it could assist in earlier melt. However trying to incorporate that into a prediction really needs physical modelling - not something I'm capable of engaging with.

Good luck with your prediction.

Well, the uptick (or downtick, depending on your point of view) didn't take long. Once Hudson and Baffin melt out, it looks like Kara will go very quickly (it's very thin an fragmented). That huge polyna north of Sibera is growing and connecting up with smaller ones... Basically, unless the weather for the rest of the summer is unusually calm and cool, a repeat of 2013 isn't going to happen.

Meanwhile, the geniuses at WUWT are predicting 6.1. I used to wonder how they could believe that being so completely wrong so many times about so many things was helping their cause. But then I realized: they're not denialists, they're really in denial. Actual, medically diagnosable denial wherein the subject refuses to accept objective reality now matter how much evidence they are presented. It's kind of sad when you think about it.

I have to be careful of throwing stones as with my SIPN prediction being the fifth lowest I could idly be accused of biassing to the low, just as WUWT bias to the high. However, they've just had a straw poll, whereas I chose my method, did the numbers and that's where they came out. I should note that the low end of my prediction is set by hindcast behaviour in 2012, whereas the high end is set by most of the other 2007 to 2011 years - they tend high in the prediction range. The only bias my prediction betrays is as stated in my submission - that volume loss drives extent decline, and that the 2007 to 2012 average SLP pattern is what we can expect in most summers to come, including 2014.

I suspect that the summer pattern has arrived, unlike last year, and that we'll see the high over the Arctic ocean dominate 2014 from now on.

CT Area is showing large falls, and as it lags NSIDC extent by two days will for at least the next two days. This is playing havok with my prediction method for CT Area. It's gone from the central estimate exceeding 2013, to the upper bound excluding 2013 in just three days!

Chris, you may have noticed that James Screen has two new pubs in Nature Climate Change in the last week or so. I've obtained copies from him and will plow through. He still finds no amplitude trend, but does seem to have fallen in line re the blocking trend (although possibly I was mistaken in thinking he wasn't). I do wonder if he may be missing some things due to an insufficiently fine-grained analysis (e.g. his selection of 500 hPa and geographic divisions), but of course there will be more to come from him (and others).

The melt is hard to predict. Aside from being very conditioned on the weather, especially at the end of the season, every year there is more heat in the oceans, the sun melts the (former) permafrost and the arctic rivers flood warm water into the ocean, and the CO2 and methane increase, etc. Eventually the ice just won't hold up to anything. It'll be thin at the start of the season and it'll be gone no matter what the weather does.

So picking low is smart because you're going with the trend. Picking high is just a crapshoot.

If you come back here and read this, could you possibly email me the papers? TIA - chris886222 at btinternet.com

I didn't get the impression Screen was dismissive, I just thought he didn't think the Francis evidence was strong.

I'm going to be sticking with 20 June for my CT Area prediction, and that will be high...